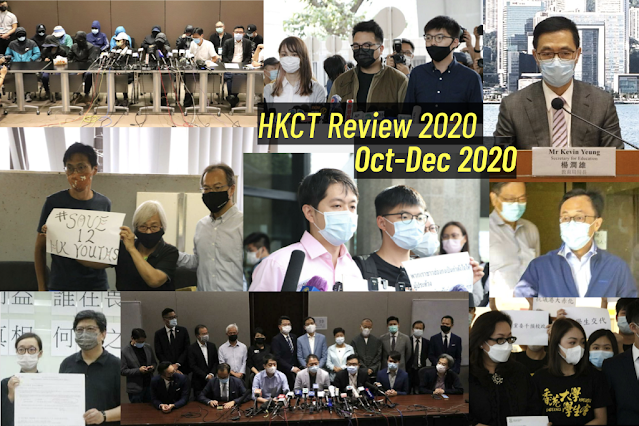 With the 79th Chinese National Day coming on 1 October 2020, almost nobody in Hong Kong under 30 identifies themselves as “Chinese”. According to HKPORI’s final tracking survey results on Hong Kong people’s ethnic identity, rift widens between Chinese and Hong Kong identities and national pride plunges to one in four. All these indicators are at their record lows since the handover and the reasons are nothing more than open secrets. Pieces over pieces of news have been breaking Hongkongers’ hearts.

The pro-Beijing camp has always wanted Hongkongers on the Mainland to cast votes because they are sure these voters will all be their supporters. By doing so they can effectively win pan-democrats by lengths. The issue of external voting was mentioned on in the Electoral Affairs Commission's (EAC) Report on the 2020 LegCo General Election released on 12 Oct. In response to the concerns from the members of the public (https://www.facebook.com/hkcolumn/posts/2789876991229682), CE responded that the idea of external voting was put forward by the Hong Kong SAR Government based on the aspirations of Hong Kong people living and working on the Mainland conveyed over the years.
See also:
https://www.facebook.com/hkcolumn/posts/2782397188644329

COVID-19 means people are grounded and countries are not going to have that many flights everywhere. Unlike SARS, which lasted for less than half a year, COVID-19 is still affecting us as you read. The aviation industry, among others, bears the brunt in suffering losses, and redundancy is inevitable. Cathay Pacific on 21 October announced the lay-off of 5,900 actual positions across the entire Group, which accounts for around 17% of its established headcount. This means some 5,300 Hong Kong-based employees will be fired and about 600 employees based outside of Hong Kong also possibly being affected subject to local regulatory requirements. In view of the devastating news, Eaton HK published a statement to support staff members being affected. (https://www.facebook.com/hkcolumn/posts/2785570278327020) 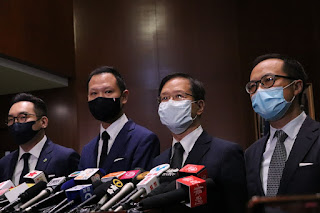 22yo HKUST student Alex Chow Tsz-lok who fell into a coma after falling from a height at a parking lot during a clash in Tseung Kwan O succumbed to his injuries and died on 8 Nov 2019. (https://www.facebook.com/hkcolumn/posts/2799868830230498)
In the early hours of 4 Nov, protesters had blocked roads and thrown objects at the police in Tseung Kwan O. The police launched tear gas to disperse the crowd, and Chow had fallen from a height at Sheung Tak Car Park during the clash. The police subsequently admitted that when Chow fell from a height, the riot police had launched tear gas outside the carpark, but whether that was related to the fall, the police didn’t exclude any possibilities. The death inquest of Alex has been carried out for over 20 days and the giving of testimony was expected to be completed on 4 Jan 2021. After that, case would start to be summed up in two days. For more details exposed during the inquest, please read this.

While some may think being jailed means one should be deprived of all freedom and dignity, some may not think so. Leung Kwok-hung, former lawmaker known as Long Hair, won the final appeal. Court of Final Appeal rules that requiring male inmates to cut hair breaches Sex Discrimination Ordinance. (https://www.facebook.com/hkcolumn/posts/2816692275214820) After losing the court battle to ‘Long Hair’, Hong Kong’s prisons considered shearing locks of female inmates in name of equality, SCMP said. (https://www.facebook.com/hkcolumn/posts/2820775728139808) 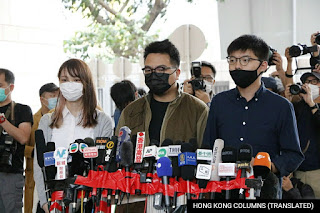 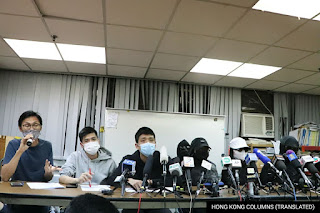 The group of 12 was captured by Chinese coastguards on 23 Aug while trying to flee to Taiwan on a speedboat. Most of them were facing criminal charges in Hong Kong for offences linked to last year’s anti-extradition bill protests. After being detained for over three months, 10 of the 12 were brought up to Yantian District People's Court in Shenzhen for trial. Consulate staff from the US, the UK, Canada, Portugal and the Netherlands waited for about 2 hours but they were not allowed to enter, and so they left. The Yantian Court later on the same day uploaded that the court has listened to the procuratorate's opinion and the defence side's views. The court will choose a date to announce the verdict. (https://www.facebook.com/hkcolumn/posts/2840392502844797) On 30 Dec, after the verdict was made, the state-run media soon commented the case showed Mainland Judiciary's prudence and professionalism. (https://www.facebook.com/hkcolumn/posts/2841787936038587) Yet, the transparency of the case was clearly “open”. The response of 12 Hongkongers’ Families to “Judgment” is here: (https://www.facebook.com/hkcolumn/posts/2841809446036436)

The administration invoked emergency law and announced a ban on masks at all protests including authorized ones on 4 Oct last year. Last Nov, the anti-mask regulation was ruled unconstitutional. The ruling was partially overturned this year in April following an appeal from the HKSAR government. On 21 Dec, a 5-judge panel (including Lord Hoffmann) at the Court of Final Appeal ruled that the ban on face masks at unauthorised protests and rallies was proportionate and no more than reasonably necessary to prevent violence. (https://www.facebook.com/hkcolumn/posts/2834989970051717)

US’ Sanctions on Chinese and Hong Kong Officials