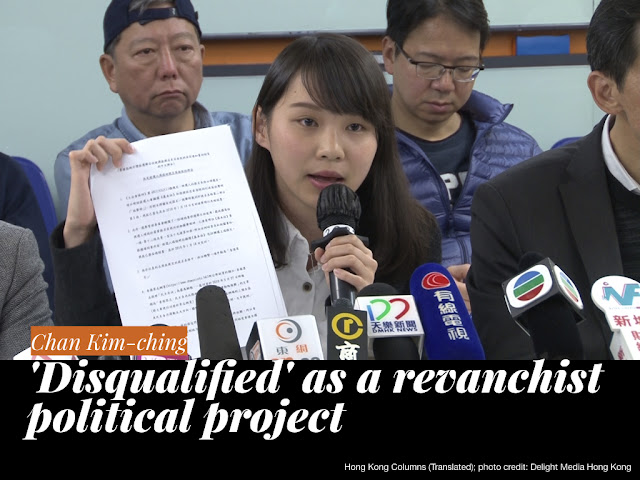 Since a series of LegCo disqualification (DQ) events last year, the party and the SAR government have been colluding to deprive Hong Kong people of the right to elect their representatives freely and deny the right to stand in election by means of political censorship. From now on, only the party's political proxies can be chosen. A sound justification for DQ is not bothered with anymore.

I agree with Professor Ma Ngok's article very much: Why not revert to the appointment system before the 1980s when things have degenerated to this stage? Why cloak ourselves with the façade of democracy?

The misfortune of being DQ-ed does not only fall on Agnes Chow, nor is it limited to LegCo. In the past few years, there were waves of DQ in society. There have been all sorts of political censorship to disqualify people in universities, the civil service system, media organizations, and the business sector. DQ was born in a new political order, dimensionally unprecedented, where the nation’s sovereignty hangs above the established social and political rights of citizens. This is an act of state that propels Hong Kong politics into the abyss of uncertainty. When the censorship incidents were reported, they often end with people’s submissive acquiescence rather than a reflection on the part of the state apparatus. An authoritarian regime’s greed cannot be satiated by its success in the political field. Beijing's strategy in ruling Hong Kong will be the full politicization of Hong Kong society, it will settle for nothing less.

In face of DQ events, we feel indignant, but we cannot lose our acumen and direction despite the ever-harsher political suppression. A macro perspective is especially needed in times like these. We should realize that the series of government suppressions is a stretched-out revenge for the Umbrella Movement. The government's target is not only the participants of the Occupy Movement but Hong Kong itself.

If we are to describe in detail this political scheme, which has begun, we can call it a “21st century nation re-shaping project”. The strategy is to overhaul the socio-political system and identity in this city through a top-down approach, so as to achieve what Beijing calls - “winning minds and hearts”, thereby getting rid of people's potential imagination for democracy. The goal is to turn SAR into a special economic zone.

This scheme may be highlighted by the abandonment of an entire generation of Hongkongers – not just Agnes Chow's generation (who were born in the 1990s) but the last four generations before Chow until the Baby Boom (basically those who have lived during the colonial era). The next generation, meaning the current secondary school students, is not considered “red” enough, and the scheme aims to create a national identity starting with primary school students.

If we say the Khmer Rouge changed the national identity through genocide, the “identity revamp project” will be completed through these four ways:

3. Let the party's force permeate in each and every aspect of society, going beyond political associations as it currently stands. Implanting the authoritarian regime into education, judiciary, workplace, departments and other social resources allocation system. Eventually, an ordinary citizen’s access to social resources will be conditional to his succumbence to the authoritarian regime instead of stressing the principle of fair competition. The life of those who do not stick to the regime will be arbitrarily DQ-ed or restricted.

4. Renovate the existing establishment and make it a stricter tool for united front work, or Tongzhan. Completely control the network and media information. Staging a “media war” for every social and political incident every day. Creating internal conflicts among the people – to affect the enemy and to extinguish self-recognition by mobilizing the people.

Most countries (including democratic ones) hate dissidents and will put labels on them to make their demands seemingly unreasonable, unrealistic and unfeasible. Some may ask, what can a commoner do when he may be DQed at any moment and the Basic Law may be reinterpreted at the regime’s whim?

Firstly, it is about rationality. People must have their own acumen and confront wrongdoings under this lopsided social system. At the same time, not only do we need some small victories, we also need moonshot thinking. We should construct our agenda with politically unfeasible ideas, so as to break the shrinking political room.

Secondly, it is about practice. The regime tries to give you up, enslave you and force you to emigrate. We should prove that even when the regime has stolen the sovereignty to suppress the people, the people remain determined not to submit to authoritarian rule. We should make the regime know that society is filled with people more capable of conducting good governance and winning hearts. The regime needs to know that their authoritarian way is only fit for ruling a land of puppets.

This will be the largest humiliation to Beijing's “new constitutional” rule in Hong Kong.
Posted by Azurino at 00:11 1 comment: