Ching Wing See: This is What You Asked For 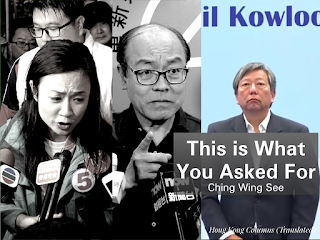 This morning, some people have been mourning over the loss of Lee Cheuk-yan in the by-election, claiming it as “the fall of Hong Kong”. Meanwhile, some commentary claimed that localist opinion leaders (such as myself) have been the worst, as we advocated for a “scorched-earth”/”kamikaze voting” strategy and dissuaded voters from supporting pan-democrat candidates, resulting in the loss.
What are the facts? There are several of them. For starters, in new public housing estates such as Tak Long and Kai Ching, Lee Cheuk-yan yielded way fewer votes than Chan Hoi-yan, who was backed by CCP’s propaganda machine and election manipulation mechanism, which means that the gerrymandering done by the Liaison Office and Hong Kong Government has been effective. As pan-dems such as Lee himself welcomed Chinese immigrants with open arms and advocated for their access to public housing, the situation today is but the result of what they had previously planted, and has nothing to do with others.
Secondly, the mechanism for pan-democrats’ campaign propaganda has come to an end. On the election day, 3 newspapers voiced their support for Chan, much like what the Apple Daily would do for Lee, but due to the difference in the make-up of readers (and let’s not bother to discuss those of Ta Kung Pao and Wen Wei Po), Apple Daily failed to operate like Oriental Daily. Oriental’s day-to-day coverage on small government handouts and vulnerable groups, as well as their mocking of university students, all appeal to the aesthetics and ideologies of HK’s blue-collar workers. Whereas to assume all blue-collar are pro-establishment would be a slippery slope, it is, however, an easy job for Oriental Daily to lead the masses into hating a self-aggrandizing and incompetent union leader. Despite the fact that Apple Daily readers are also the most vocal ones to interact on the Internet and can hardly be manipulated by media, Apple Daily wouldn’t stop rooting for unpresentable candidates. No matter how decent they seem at first, Apple’s Choices either slowly fade into oblivion, like Joshua Wong, or are simply an embarrassment to start with, such as Alvin Yeung. To put forward candidates like such almost amounts to announcing the death of the campaign in the entire election. Some pan-dems, such as Longhair Leung, even went to the depth as to provoke and taunt undecided voters. Such electoral suicide reflects pan-dems’ complacency and refusal to learn.
Thirdly, these politicians are unbearably annoying to start with to the point they almost call for a beating. Both Lee and Frederick Fung were sellouts to HK people on various political issues, and they fail to manifest any passion and dedication in their day-to-day community service. These numerous notorious incidents have been deeply embedded in our memories. As the colloquial term say it, the reason why we “vote with tearing eyes” is because even their usual supporters find them simply unpalatable. If a political sector who needs to run for campaigns have run out of choices but old useless candidates, then it’s simply announcing its doom and demise, especially during the times where the youth struggle to find a place and are at odds with useless old bums. As they approach retirement age, instead of competing with youngsters and embarrassing themselves, how about being supportive to youth and taking up mentoring roles?
Lastly, if one seeks help, one should remain humble, especially for politicians, whose role is but to appeal to the masses. They need to stop bickering with voters; otherwise they might end up seeking employment service themselves.
Posted by Pluto-Gordon at 20:23 No comments: