I have received several letters from my readers since the publication of my article Japanese Is Indeed Different. Polarised as they are – Little do some question its side towards Japanese respect on lives, while others sailed into my opinion of the ignorance of Japanese cruelty on Chinese back in the day.

It is commonly known that most of the Chinese are killed by Chinese themselves, so does the brutality they are subjected to.

As for the how, it can be traced far back to the Song state during the Spring and Autumn Period. By the time, commoners exchange their children for that of the others as a source of food, whereas in our modern history, nearly 100 years ago, there were blood-soaked steamed buns recorded by Lu Xun. [Translator's note: Lu Xun, a leading figure of modern Chinese literature, described in his work Medicine that people at the time believed steamed buns which were soaked with human blood could save lives. That is why some traded them for money.] If we look closer, examples one after another are there in front of us since the establishment of the Red China in 1949.

Affirmatively speaking, to me, Chinese is never ever a nationality which knows how to respect.

There is a significant difference on the nature between Japanese and Chinese. It is not that Japanese will necessarily be nice to the others, but they will, to themselves. Chinese, in the opposite, they make 100% sure to treat their people badly.

"Even a vicious tiger will not eat its cubs" was an old Chinese saying. Yet ironically enough, Chinese had evolved to feel at ease digesting others' children and to comfort themselves, "at least we’re not having our own kid."

You should not rest on the conclusion that Chinese has abandoned such beastly behaviour. Instead, they have transformed it – some sell contaminated milk formula, some sell poisoned vegetables, some sell gutter oil.

For the sake of economic development, today's Chinese demonstrate devastation on the land, water and air leaving no chance of survival for next generations. Isn't it another form of utilization to satisfy their appetite by consuming the future?

This is not a normal Japanese would ever do.
Posted by Unknown at 01:58 No comments:

Atsuna: Why aren't there disciplinary teachers in universities?

Why aren't there disciplinary teachers in universities?
Translated by Chen-t'ang 鎮棠, Written by Atsuna
Original: http://www.passiontimes.hk/article/11-13-2014/19655

At the recent Commencement Ceremony of Baptist University of Hong Kong (HKBU),  the Vice-chancellor (VC), Albert CHAN Sun-chi, refused to hand out graduation certificates to students who held up yellow umbrellas on stage. He told them they should "respect themselves".

As a CPPCC deputy, Chan believes there should be "big principles" by which a school develops itself. But should this "principle" be one of "illustrating illustrious virtue", or following instructions from the Communist Party like a flunkey? No wonder Confucius said, “Men of antiquity studied to improve themselves, men today study to impress others.” Now when it comes to getting education, acquiring knowledge plays second fiddle to learning how to make concessionary steps and to mentally "castrate oneself as if he is a eunuch".

After the ceremony, HKBU issued a statement saying participants should respect the views of others who were in attendance.. Tang Fei, the chairman of the HKFEW (a pro-China educationalist federation), said students should not deliberately embarrass other parties, as this was not behavior expected of people who had received higher education.

I do not know how can holding an umbrella be "not respecting those at the scene" nor understand how this embarrassed Albert Chan. Is he physically disabled? Moreover, exactly because students have received higher education, they should not tighten their lips and "consider the faces of the seniors". This might be a "solemn" response, but it is just hypocrites who go with the flow. Albert Tam, a fiction writer, says: "It is a VC's responsibility, not right, to hand the certificate to students. Students can refuse to receive it, but if the VC refuses to hand the certificate to them - then he's not doing his job."

Yet, many Hongkongers are "villagers" who are a long way to being mature, and who are afraid of the "crime” of being disobedient. They believe those "adults" who have the say are always right, and blame those "bad kids" who dare to challenge the authorities. In a society like this, a university might then need disciplinary teachers to nit-pick students on Facebook when they use foul language, or to withdraw the right of graduates to receive their certificate if they make a silent statement on stage.

And if that is still not enough? Better learn from the vast piece of land across the border! Liaoning Daily, a CCP mouthpiece, issued an open letter to all university teachers in China, entitled Teachers, Please Do Not Say China in This Way after a "decoy operation" in the classrooms of 20 universities in Shenyang, Beijing, Wuhan, Guangzhou, Shanghai etc that lasted over two weeks. They reported that they found out most teachers acclaimed the separation of powers in the west, and treated "not entering the party" as a stylish thing. The editor wrote: "Being pessimistic should never be the 'main rhythm' of a mature society." But the reality says otherwise. The more mature a democratic society is, the more pessimistic criticism it will hear. In exuberant authoritarian states, on the other hand, you are bombarded by one-sided praise.

The end of the article asked teachers to "treat China well", because students were "sunflowers" who faced and listened to their teachers as the sun. HKBU and PolyU are just treating undergrads as secondary school students, while the place above Hong Kong is even blatantly treating them as primary school students who just happen to inhabit adult bodies. Because in their eyes, university is just a place to get a certificate. Their view is that students who are eager to learn just care about marks and grades because these will determine whether they can go on to a PhD or a successful career. They care little wether you are brave or charismatic.

Merely emphasising that "undergrads are just students", but not treating them as individuals in a fair manner, is the consequence of a place with the wrong ‘metabolism. Students should not listen to these Colonel Blimps.
Posted by Azurino at 13:55 No comments: 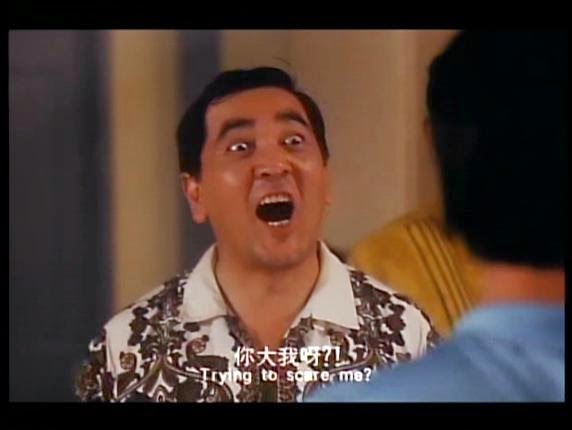 I read a piece of article, named "Famous Italian Brands’ Disinvestment Panic" from Oriental Daily's headlines which is spreading everywhere on the Internet in this morning. In the paper's interview, Fabio De Rosa, the Italian Chamber of Commerce in Hong Kong & Macao, pointed out that since the start of the umbrella revolution, the sales of its members have taken a tumble.

He also warned that if the occupy movement sustains by the peak season of consumption in Christmas; some of its members will consider disinvestment in Hong Kong. At the end of the piece, Oriental Daily listed some celebrated brand members of the Italian Chamber, such as a.testoni, Fendi, Giorgio Armani, Prada and Salvatore Ferragamo.


What struck me at the very first moment was confusion, given that social upheavals including overthrow of regime, social instability, demonstration, strike and occupy movement rather happen globally. It should stand as no surprise since Hong Kong is certainly not the origin, not to mention the most violent and severe one.

If you hesitate in resting your conclusion this way, a visit to Mong Kok will clear your mind. Jewellery shops in the occupied Nathan Road remain normal operations, only when the influx arrival of blue ribbons and police will force the shops into closing state.

How many jewellery shops are there in the world like the ones in Hong Kong could carry on business as usual even located in the occupied area? If this should be labeled as "turmoil" and can cause such a slump enough to bring withdrawal decision on the table, where should these brands settle themselves instead? Knowing that the level of instability in the rest of the world is far more astonishing, where should they go other than Hong Kong?

Internet is the key anyways. Put aside the deduction and go straight to the branches of the shops Oriental Daily mentioned.

The first one, a.testoni, remarkably set up a branch in Kiev, the capital of Ukraine in February 2012. It is known that the political situation there has grown tense with the Maidan Nezalezhnosti being the centre of protest activities and the city hall being occupied. Yet to the present day, a.testoni still has not backed out the business from Kiev.

Hong Kong's scale of demonstration pales in comparison with that of Kiev. It is predictable that there should not be many citizens and tourists able to purchase shoes during that coup period in Kiev, however, they have not made an uproar grumbling about the tough environment for business or the consideration withdrawing from Kiev.

No reasonable man would ever assume stability in Thailand. The government of Hong Kong has severally issued red and black Outbound Travel Alert System on the country due to Bangkok's regime overthrow activities.

In October 2013, Salvatore Ferragamo opened a new branch in Siam Paragon Shopping Center. And on 21 January 2014, Hong Kong's Outbound Travel Alert System on Thailand has leapt from the red one to the black one. The number of tourists there in February and March sank 8-9% comparing with last year's data while up to today, this branch still stays.

Even the Thailand's extent of putsch is not sufficient to make brands leave, in what persuasive grounds would Hong Kong's umbrella revolution be powerful enough to lead to brands' disinvestment? It adds more incredulity as the number of mainland tourists recorded during the Golden Week has shown a 1.55 % increase comparing with last year's data.

Tourists from mainland China still go shopping in Hong Kong. The difference there is that they shift to non-occupied areas. These Italian brands could make adjustments in places like Sha Tin or Tung Chung tying in the consumers.

The flood of counterfeits in mainland China has advanced numerous hearts towards pursuits of genuine brand products. Hong Kong, a city nearby, to international brands is a goose with golden eggs. Even the sales suffers a small setback, it is still more than profitable. If these brands leave for real, I doubt there will be another place much business-favourable and much safer.

For this reason, I would like to offer Paul Chun's movie quote to this Mr. Fabio De Rosa, "TRYING TO SCARE ME?"
Posted by Unknown at 00:59 No comments: