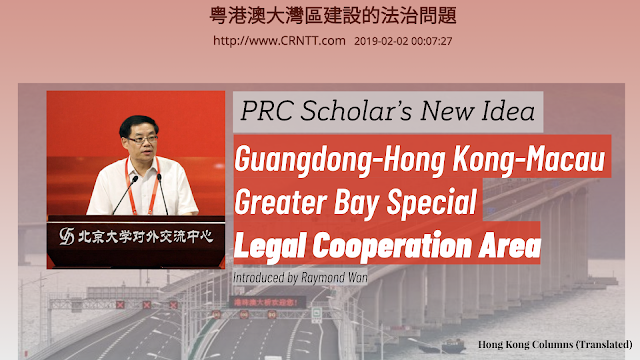 The “Guangdong-Hong Kong-Macau Greater Bay Special Legal Cooperation Area” may be unheard of for many Hongkongers, or scholars even. Yet it represents “systematic innovation” in the architecture of GBA development. Li Lin (李林), Director of the Institute of Law, Chinese Academy of Social Sciences, published an article named “Legal implications of the Greater Bay Area” in January at China Review in China, saying that an iconoclastic legal platform where the strategic partnership upholds the ideal of mind liberation is required to solve the fundamental problems arising from systematic differences within the GBA.

The preliminary idea of GBA is that “the consisted cities transfer part of the power of legislation, enforcement and judiciary to help stipulate a set of conjoint ordinances and policies under ‘One Country, One System’ so that the future development of different aspects there, economy, finance, talents, technology, intellectual property and environmental protection, for instance, can go on without interruption or conflicts”.

Li suggested that equal status should be given to Guangdong, Hong Kong and Macau as a democratic move, and that the central government’s guidance will assist the leaders to reach consensus. Additionally, a collective effort is demanded of the cities to form a legislative committee to cope with the issues of law. Li added that the ordinances and policies should be based on several principles to smoothen the process: territorial jurisdiction comes before nationality jurisdiction; what is beneficial to the execution of civil law is given priority; issues associated with the sovereignty, national defense and diplomacy are not to be interfered with; Guangdong, Hong Kong and Macau are obligated to provide mutual aid to one another in terms of law enforcement.

Li also regarded the current situation as too urgent for long term solutions, pinpointing that overcoming every possible systematic obstacles there will take ages, while the development of GBA is so imminent that it cannot wait for decades. Therefore he proposed to act practically, to adapt with a set of temporary rules within the next five years, and continue from there.

First and foremost, it is creating an entry point of which the circumstance of GBA can be realized. The three-pronged solution includes the considerations of GBA legislation, executive agreement and national policies. To my understanding, the precedent has been set through the juxtaposed border control over the Guangzhou-Shenzhen-Hong Kong High Speed Rail Hong Kong Section. Hong Kong’s legal sector castigated the operation which mainland officers would be given authority to enforce mainland law in Hong Kong, as it apparently points to the violation of the Basic Law. In that case, Beijing bypassed the legal complications in the midst of controversy, letting the government of Guangdong Province and Hong Kong government arrange customs and immigration details for themselves, and subsequently approving the scheme as being in accordance with the Basic Law. There, very conveniently, through legislation, can certain practices be implemented in Hong Kong.

Secondly, Li indicated that study on how to legislate needs to be taken. Specifically, the central government legislation, the local legislation and the cooperative legislation, should be put forward.

For the central government’s part, the Standing Committee of the National People's Congress shall legalize all major policies and problems therein and authorize particular provisions based on the Basic Law to meet any urgent need for the institution of GBA, while in the power of the State Council of the People's Republic of China, dedicated executive stipulations for GBA items (e.g. attracting talents, funds allocation, mobility, employment and industrial development) can be set in motion.

Thirdly, dispute resolution (on economy, civil matters, intellectual property and so forth) is reckoned as one of the measures to be taken into account. Under the long-running constitutions, all three districts have sufficient experiences on criminal procedure and administrative litigation. A few adjustments made according to the GBA condition can be expected to be rather straightforward, and the rest can be kept for the time being. To be exact, it should adhere to “three propositions”—utilize the civil, administrative and joint mediation to the full; reinforce the notarization of the legal documents and the mechanism for civil and commercial arbitration; leaving court litigation as the last resort.

Li’s article is the continuation of “The Legislation Issues of Guangdong-Hong Kong-Macau Greater Bay Area”, co-written by Zhang Liang, the Associate Dean of School of Law, Sun Yat-sen University and Li Dong-ming, a PhD student at the said university. The article advised in short what a cooperative legislation would help in easing the potential difficulties, and that it denied the existence of autonomy in GBA as it is a state project initiated by Beijing.

These mainland scholars’ statements provide legitimate ground for the worries of a deteriorated “One Country, Two Systems”. For one thing, the “law” mentioned here and there to make way for GBA appears more of a broad definition of policy, planning, agreement and regulation combined. It naturally makes people wonder if there’s an appeal mechanism to the execution of the “law”. For another, the powers to be transferred by the special administrative regions for certain policies is yet to be defined. It raised doubts over the promised high degree of autonomy come what may. And how would the foreign funds, foreign governments and foreigners working in Hong Kong evaluate the city’s status as an international city/ international financial centre after that?

Since the Opening of China, southern China and Hong Kong have luxuriated in the complementary advantages brought by market mechanism; however, the latest plan of development concentrates so much on strengthening the roles of the central government and the regional governments. The Public’s input is ruled out in most of the process (particularly the parts related to Hong Kong’s rule of law and the citizens’ quality of life). We shall demand public consultation to be restored as it has been the pillar in our policy formulation so that the credibility of any policy is not undermined.
Posted by Unknown at 20:48 1 comment: