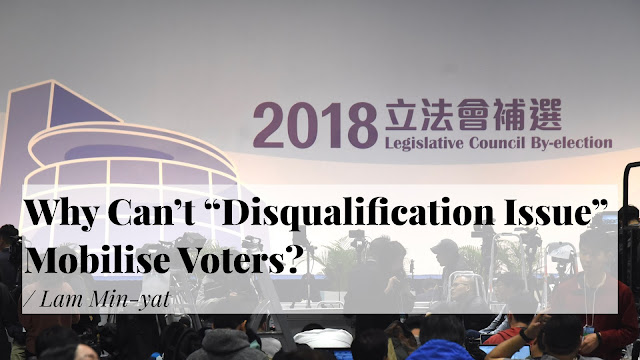 If we were to ask why the “Disqualification Issue” failed the mobilise the masses, I would allude to the movie NO, a film adapted from the history of Chile's referendum. In the movie, the dictator Pinochet orchestrated a referendum to extend his rule. The opposition needs to call on the electorate to vote NO. They set out the film TV commercials, with scenes of hardcore riot police beating up citizens, ending with a call to vote against.

The opposition presented their work to a young advertiser, who finds it ineffective. The advertiser said that such serious theme has little appeal to the masses. He noted that a message needs to be targeted to the public as a product is targeted to its market.

The public we refer to is essential an apolitical bunch. They need to make ends meet, have a family to take care of, have classes to attend, lives to live… Force-feeding them with political ideals will not be able to affect them; the message itself must be approachable.

Professor Ma Ngok noted that the gravest takeaway from this by-election is that the ordinary citizen is not as receptive to the “Disqualification Issue” as we all expected.

Those who are repulsed by the “Disqualification Issue” pay close attention to political news everyday, like you and I. We can tell the difference between localists, "yit-po-shing" (Civic Passion-Proletariat Political Institute-Hong Kong Resurgence Order), moderate pan-dems, radical pan-dems, left-wingers, right-wingers… etc. There may be one or two hundred thousands of us in society. Yet most of the Hongkongers we meet on a daily basis cannot tell Youngspiration, League of Social Democrats or Demosistō apart.

A lot of youth who regard themselves as woke would curse these “Kongformists” as undeserving of democracy. The “Kongformists” are those who pay little attention to politics, and even those who have been subconsciously persuaded by TVB and pro-Beijing newspapers to believe that politics is chaos.

The aforementioned crowd makes up the majority of society. That is the reality. They are exactly the people whom the advertiser in the movie NO is trying to mobilise. The opposition cannot regard them as “Chilean conformists” and give up trying to sway them, only to bemoan there are too many “Chilean conformists” in Chile for democracy to happen.

For you and me, the “Disqualification Issue” is an egregious assault on the law, due process, reason and common sense. Yet most people cannot even find time to care, or simply don’t want to care. Especially when television and newspapers nowadays are all under the enemy’s command, giving them even less incentive to care.

This year or so, the government stripped many candidates’ rights to run for office unreasonably. It has also stripped six LegCo members of their seats. Why is the daily passerby so nonchalant to such ridiculous and barbaric acts?

From daily observation, I see that regardless of adults or students, they have come to roll the word “DQ” on the tip of their tongue, as if it is nothing out of the ordinary. I think there are a number of reasons why this has occurred:

First, the mainstream media have all been homogenised. Mainstream media, especially TVB, have basically given a cold shoulder to the issues of government stripping candidates’ right to run as well as elected candidates’ right to represent. Even when there is coverage, it is stuck with the formulaic expression of “They have been too radical. The government is acting in accordance with the law. Pro-establishment scholar points out it is within the government’s right to do so.”

On another matter, the expression “disqualification” is a complete disaster. What is happening is candidates’ rights to run and elected candidates’ rights to represent being stripped away, yet you let the mainstream media lead you on and call it “DQ”. The average Joe hears two English letters and does not associate it with anything negative. This blurs the severity of the incident. Disqualification to the ordinary citizen is like a referee stripping a rule-breaker’s right to play, most commonly seen in sports competition. Anti-DQ to the innocent ears sound like we are in the wrong to begin with.

There’s a more serious point: Yau Wai-ching’s “Re-fucking of Chi-Na” have been looped ad nauseam by the mainstream media, so much so that the public has come to equate DQ with “Re-fucking of Chi-Na”. You who are politically attuned will know even using that as an excuse to strip a legislator of her seat is out of line, but the commoner sentences the legislator to death the moment they hear a swear word.

An election is about rallying people to vote. For many people to be rallied, it takes more than an appeal to ideals. There needs to be an appeal to emotion and relations. An appeal to emotions is to make the public feel the need to vote. This needs to go beyond ideals. They must have an emotional motive, such as grief, anger, fear, hope, sympathy… etc. To be stripped of the right to be elected and to represent is a grief-worthy and angering issue in itself, yet the incident is too abstract in reality, coupled with the aforementioned reasons, it failed to rally the people.

So how can the masses be rallied? Whatever I can think of, I am sure my democrat friends can also think of. Here are my two cents:

First of all, it is important to capture the attention of those who do not care about the “Disqualification Issue”. How? Since the television and newspapers are all under the regime’s control, we must sow our seeds humbly on the streets and promote in local communities. This seed-sowing process demands time and patience and requires our constant commitment. As to whether the democrats had spent enough time and patience on that, I’d say there is room for improvement.

This seed-sowing approach is no panacea. There are those who are immune to such medicine. The “Disqualification Issue” failed to capture the imagination. How can such imagination be presented? Take the anti-national education movement for example. If it weren’t for the overwhelmingly leftist “The China Model” textbook, the public would not be aware how chilling the whole thing is. Yet when it comes to the government stripping of legislators of their seats, there wasn’t enough grief, fear and frustration. Better for Hong Kong Island, there were a bunch of commies who were verbally abusing pan-democrat volunteers on the day of the by-election. Kowloon West did not have that to count on.

For the majority of the public, the “Disqualification Issue” is irrelevant to daily life. If campaigners cannot make people empathize with the “Disqualification Issue”, then they should seek issues that are more tangible in daily life. These issues can be the overwhelming surplus in our reserve, resettlement and payments for reconstruction (Want to guess how many voters can understand “Say no to the Commodification of Housing”?), the national anthem legislation, Carrie Lam giving a free pass to the UGL/ $50 million case, SJ Teresa Cheng knowingly breaching the law, uniformed groups being asked to march by CCP stylistic standards… etc. These issues are comprehensible to the commoner, and only by comprehending the issue will he or she finds meaning in voting.

I understand Carrie Lam has quite a remarkable skill in giving the impression that “whatever’s at fault is not my fault”, and many do believe her. At the same time, the resources made available to pro-communist political parties is 10 times that of pan-dems. They have infinite resources to build grassroots networks and count votes. And let’s not forget, TVB was shameless enough to insist on not hosting an election forum, giving a cold shoulder to this entire by-election.

This by-election saw a major loss of votes in the public housing estate areas, meaning grassroots voters. This electoral result is a siren to the pan-democrats. The reality is that the referee, the linesmen and the host are all under the CCP. If democrats do not ponder on how to attract grassroots voters and the politically indecisive ones, a repetition of Kowloon West’s defeat is not impossible.

In the movie NO, what did the opposition use for the final version of their advertisement? It was song and dance modelled on commodity advertisement. There was no catastrophe in the ad, the imagery and music grab your attention immediately. The message of the advertisement is simple and direct: to vote, and vote NO; without a dictatorship there will be better days ahead. Only by grabbing the masses’ attention can you appeal to them. Do you know what the electorate of Kowloon West remembers most? “Vincent Cheng? He’s the brother in law of Myolie Wu.”

(P.S. Perhaps I’m being too clever too late with the full benefit of hindsight. Yet I’m not satisfied with being clever after the facts, nor am I here to boo and challenge. Beyond writing this article, I have strived to find my elders and friends to vote. With circumstances like these, I promised myself I will help out with canvassing in person in the upcoming election, let this be my proof.)