Jan Bochenski, a former marine police inspector and a retired Cathay Pacific pilot, wanted to have a walk in Sai Wan after dinner on 4 August as he lives nearby, but was subdued by the police later on. He was told that he was arrested for unlawful assembly when he was brought to the police van. He was detained for 28 hours before released.
Bochenski said around 21:00 on 4 Aug, he went to Ka On Street and found that about 30 to 40 onlookers were on the pavement, looking at the police. Some police afar were guarding the Liaison Office. Bochenski heard some disputes but did not think that to be important, so he continued to walk along Des Voeux Road West.
Suddenly, some PTU holding batons and shields approached from the other side of Ka On Street and subdued everyone, including residents in their pyjamas and South Asian delivery boy. Bochenski was asked whether he is a tourist but he said he lived nearby and just are having a walk. His reply was ignored and the police asked him to turn his phone off. He was later brought to Cheung Sha Wan Police Station. For some 40 arrestees in the same detention room, none of them is students nor wearing in black with helmets. A decoration worker, a teacher and two Indian chefs were later arranged to be detained with Bochenski.
Bochenski said the most impressive scene is there were no senior officers in the station, but all junior PCs and sergeants. Bochenski recollected that whenever there is a crisis, at least one chief inspector will be in the police station to manoeuvre, but that apparently was not the case on 4 Aug. He demanded to go to the toilet many times but was unheeded, until he said he will pee at the corner of the wall. He also demanded to call his next of kin but was also disregarded. Until rounds of complaints, he was allowed to call his wife, who is outside of Hong Kong. It was not until 5 Aug afternoon that the officers learnt Bochenski's identity as a former police officer.
After listening to the advice of the lawyer, Bochenski decided to remain silent. He said, "to be honest this makes their work easier because they know these detentions are all unnecessary; frontline officers are used for dirty work". Until around 01:00 on 6 Aug he was released but he must report presence again later this month.
Growing up in Vanuatu, Bochenski lived in Australia and the UK. His first job is to join the police force in Hong Kong and become an inspector for four years. His upbringing let him know that being a policeman in a colony must not upset the residents there.
He also mentioned that during the detention, some young officers knew that he was a policeman and had a chat with him. Bochenski was asked about his views on the current situation and he stressed the importance of trust between the police and the people - this was also the biggest challenge before 1997. Bochenski said the Royal Hong Kong Police Force spent years to build a mutual trust with the people, but now the trust has been completely eroded, and the government does not find it problematic.
Bochenski said if the government is willing to set up a commission of inquiry (COI), the mutual trust between the police and the people may be rebuilt, but the key is that both parties are willing to contribute. It has been 4 decades since Bochenski joined the force, and he still felt quite proud of being a policeman. He kept contact with his former colleagues and this year they will fly to Hong Kong to celebrate the 40th anniversary since being policemen. Although being arrested arbitrarily, his pride remains. During the interview, Bochenski repeated that the police should do their job right and cannot make arbitrary arrests.
"Whenever you are in a uniform, you should do things right and proper, otherwise you are not doing your job right, isn't it?" said Bochenski. 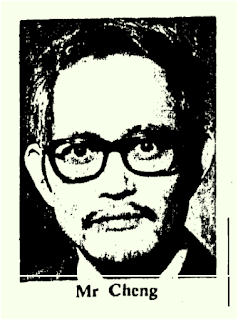 The date, next August, was set yesterday by Government's newly-appointed Chief Interpreter, Mr Y. P. Cheng, who arrived from England last Friday.
Mr Cheng, a former translator and broadcaster with the BBC in London, and his three-man team will provide simultaneous interpretations at Legco and Urbco meetings.
In an interview yesterday at the Colonial Secretariat, Mr Cheng admitted the job was a “new challenge for me.” He said he had no past experience in this field.
His first task, he said, would be to compile a standard glossary of official terms comprising mainly names and titles in both languages.
He will also train the other interpreters. They were selected on the advice of Mr A. T. Pilley during his visit last year. He will undergo an extensive familiarisation programme of various Government departments and will work closely with the Commissioner for Chinese Language, Mr Christopher Wong.
“In future, the Legislative Council and Urban Council can speak in either Chinese or English, We will do the translation, he explained. Mr Cheng said Cantonese would be used in Chinese interpretations. But we are not ruling out Mandarin, “ he added.
He estimated that the translation speed would be approximately three-quarters of a sentence behind the speakers.
Mr Cheng said the sound equipment was expected to arrive some time in July. Mr Cheng was born in Hongkong and educated in Shanghai and Canton, He has more than 10 years of experience with Radio Hongkong, All India Radio and the BBC.
Posted by Azurino at 00:07 No comments: