Admit It, You’ll Eventually Be Surrounded By A Generation Who Haven’t Experienced Tian’anmen Massacre 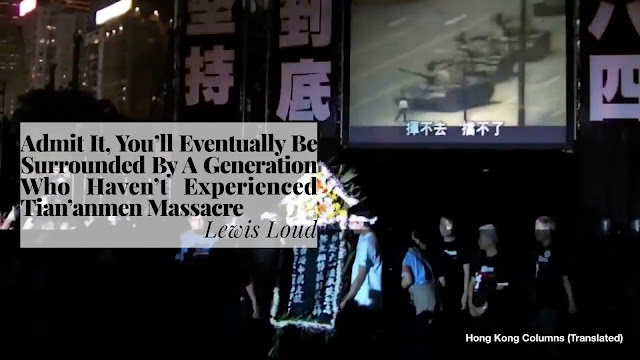 The student unions of eight universities told the press that they won’t organize any Tian’anmen-related events. Many “yellow ribbons” were angry.

I don’t know what do undergraduates think about this. A few years ago, I started to urge people to boycott the rally held by HK Alliance and to sever ties with patriotism. But that doesn’t mean that I completely know what they are thinking about because I haven’t talked to any SU members. I am already not as young as they are. With loads of criticisms against the youth, old “yellow ribbons” see them as “revolters” as the youth does not follow the old’s “traditions and values”.

What kind of emotions do these old people expect post-1989 youth to have? If such a youth says he will commemorate the Massacre forever, that would be most hypocritical, isn’t it? “If I support democracy and freedom, I should bear in mind the Massacre for 10,000 years” - this is the political correctness passed on by “HKA-HKPTU-DP” (HK Alliance, Professional Teachers’ Union, Democratic Party). My generation doesn’t really give a damn, not to mention the latest generation. Admit it, things will change. You will eventually be surrounded by a generation who haven’t experienced the Massacre.

But if you think that the next generation will completely forget that, then that is showing your arrogance. This generation has experienced their own confrontations and has desires for dignity and liberty. Localists, independence supporters, self-determination supporters have arisen in an environment way more difficult compared to the era when the British ruled. These people have paid a higher cost than the older generation. Being charged, getting bankrupt, in exile, being imprisoned, being ridiculed, etc.

I don’t think that these “yellow ribbons” do care about democracy and freedom of Hong Kong. They care about the Massacre’s façade more than the succession of democratic awareness. They do not accept that the world will be taken over by a generation which has not experienced the Massacre. They do not stress the desire for freedom, which all human beings share, nor respect the differences between the young. They keep reiterating their limited participation - I watched the massacre live on TV, I went to Concert for Democracy in China, I went to protests…

They seem to care more about staying inside their echo chamber for the rest of their life, including murmuring “students are but cat’s paws“. These students can face Hong Kong upright. Democratic Party has fought for a retrogressive political reform and had private backroom deals with the Communists. Leung Yiu-chung, one of the standing members of the HK Alliance, surrendered the chairman seat in LegCo, leading to six lawmakers being disqualified. Every time, there were people missing when key bills in the Chamber are to be voted. Tightening of the Rules of Procedures, XRL, co-location, infrastructure appropriations were all passed. Don’t you care? “Standing one night on the stage in a year makes a person upright, having clear-cut protagonists and antagonists …” Doesn’t that sound TVB dramas?

The older generation cares the most such annual party. They do not care about how many battles were lost in the reality. As long as they “win” in the night in such virtual rally, they are satisfied. They will then point the finger at protesters as spies from the Party and making riots. Those who have decades of remaining life won’t bear these.

For those “yellow ribbons”, they probably can’t imagine why is this unbearable. With those mean comments, you might think nothing happened over the past few years or even decade. They have loose standards for the authority but strict to the weak. They might think that their own contribution is comparable to building temples and beneficial to the public.

In the past two or three years, students have bid China farewell, but still, see the Massacre as a “humanitarian disaster” and had a few forums, trying to localize the commemoration of the Massacre. Yet, people who are not going to Victoria Park are slammed. Those “yellow ribbons“ had loads of antagonistic articles and words against the students, who did not have an equal amount of article exposure and airtime. If this is an election, this is equal to “scolding at your supporters”. Those who scold so loudly have their dreams come true. The students don’t think it is necessary to organize such event. Things should be said have been said.

If we say forcing people to love their country is a tyranny, then HK Alliance forcing the latest generation to have “Massacre emotional experience” is equally “Chinese”. There is metal fatigue, and a long-term emotional blackmail also generates antibody in people’s mind.

The right mentality is simple: those who want to go can go, and those who don’t are not sinners. People can still collaborate on different matters after that night. “Yellow ribbons” can tolerate Alvin Yeung, who was absent for many key meetings in LegCo, and Leung Yiu-chung, who surrendered the chairmanship, yet they just can’t tolerate undergraduates who have different mindsets when it comes to identity and “Massacre emotional experience”.

“Undergraduates ought to cry for the Massacre” - this is just the imagination of one generation. No one will be on the stage forever, not me, not you and not that incident.
Posted by Azurino at 23:29 No comments: