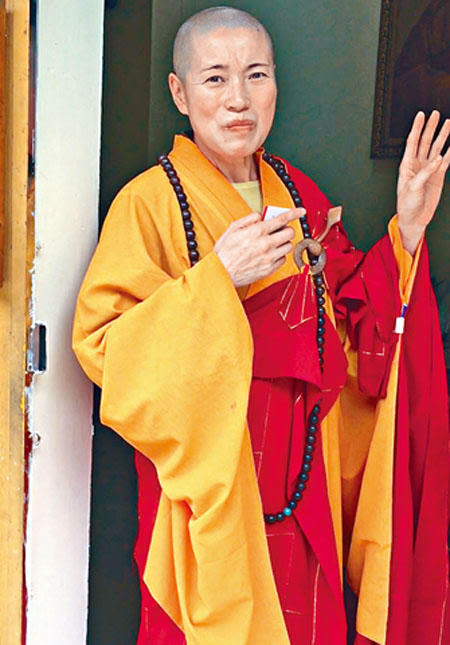 With over a month's investigation, Sing Tao has found out the female chief of Ting Wai Monastery (in Ma Wo Village, Tai Po), Shi Zhiding, had two marriages with mainland monk, in order to help them to gain Hong Kong identity cards. One of them, Ruzhi, has obtained a monk name, Shi Zhiguang, given by Po Lin Monastery in Ngong Ping, after such marriage with Shi Zhiding (or Lung Yan-loi, in secular name) in 2012. Shi Zhiguang has since become the Karma-Dana (General secretary in commoner's word). Marriage between nuns and monks is not only severly against Buddhist rules, but also another way to provide a way for China monks to stay in Hong Kong. She has also been found out that her lifestyle is extravagant, and the accounts of such monastery is but a mess.

Shi Zhiding was born in 27 October 1967 in Jilin Province, China, with her secular name as Shi Aiwen, and became Lung Yan-loi in 1993. She obtained Permanent Residency in Hong Kong since then. She told the media that she became a nun in 1997, but according to the documents in Po Lin Monastery, she became a nun in 2002, and has since become the chief, monitoring over the institution.

According to the Marriage Registry, Shi Zhiding was married in 17 August 2006, with Liu Jianqiang, a 23-year-old merchant. Liu was given a monk name as Shi Zhiqiang after their fake marriage. On such marriage certificate, they said they live in a public housing estate apartment in Tai Yuen Estate, Tai Po, with 2 wedding witnesses who believed are locals.

Shi Zhiding had some telephone conversations with Mary Jean Reimer, a director in Ting Wai Monastery. In which Shi Zhiding admitted twice the fake marriages with Shi Zhiqiang and Ruzhi, and said "I am in fake marriages, do not call the police", "They have obtained HKID cards, you can call the police. It's convenient to others and myself. It is good to be convenient to others, as they work in Po Lin too, and they can provide more comfort to my master (Shi Chuhui, who then lived in Po Lin Monastery). I am not asking Po Lin to give me more money nor asking you more."

Shi disclosed details, too: "Elderly people smells badly because of their urine, and they stink after not bathing for a few days. He was sitting on a chair, and I helped him bathing. He suffers from diabetes, and I dare not to use shower gel, and I use a glove to give him a shower. I took care of the master before, then the one who got HKID card by fake marriage did so. $3,000 a month and to bath for master. Zhiqiang couldn't stay in Hong Kong before, but when he got those ID documents, he helped the master taking bath every day. Master was happy, as if he was a kid."

Sing Tao reporters went to Ting Wai Monastery in 28 August this year, where Shi Zhiding denied of having any sorts of marriage in Hong Kong or China, and retorted by asking why the reporters have to delve into this. That day was having an Obon ceremony, and many Mandarin-speaking monks were chanting. Shi Zhiqiang, the "General Secretary", refused that he is Shi Zhiqiang, and refused to answer all questions from Sing Tao.

After seven years of such marriage, Shi Zhiding and Zhiqiang immediately divorced soon after Zhiqiang obtained HK Permanent Identity Card. Zhiding, who was then 45, married a 38-year-old male teacher, Ruzhi as a "divorced person" in 29 October 2012. They said they live in Classical Gardens, Tai Po. Ruzhi is in turn a monk too, with a secular name Gao Wuguo. He was later given a monk name as Shi Zhiguang by Po Lin as Karma-Dana as well, and "has a high status in the monastery".

During such investigation, Ruzhi (or Shi Zhiguang) has packed his luggage and left Po Lin, and seemed wanting to cut ties with Po Lin. Shi Zhiqiang, the first "husband" of Shi Zhiding, travelled back and forth China and Hong Kong. Most of the time he lives in China except having ceremonies in Hong Kong.
Karma-Dana needs to maintain the law and order within the monastery, and needs "leading morning and evening prays, leading other monks, giving lectures, and chanting charms".
===
Shi Zhiding became a different person after evening. Nearly every night, she returns to the resort in Beverly Hills, Tai Po, on a 7-person-car driven by a male driver, and returns to the monastery in the morning. Shi claims she became a nun in 1997, but actually was in 2002, according to formal documents. She did not perform daily Buddhist duties, but rather, dine out, and even went to a 5-star-hotel and enjoy delicious food, only putting meat aside and eat them all.

According to the Land Registry, the House in Boulevard du Lac, Beverly Hills, Tai Po, was bought by her "disciple", Wang Hui with HK$39.5 million in December 2012. Shi Miaohui, or in secular name Wang Hui, came from China too. She was married and had a pair of daughter, aged 5 and 9. She needs to seek help and get medicines from a psychiatrist. Shi Zhiding said in the phone conversation, "I gave the money to her, she didn't even know how to be a person. She didn't even have the money to have ceremonies for her parents, not even HK$100."

The daughters of Shi Miaohui would sometimes visit Shi Zhiding with the 7-person-car in Ting Wai Monastery. She often talked about selling the house in Beverly Hills with Shi Miaohui.

Ting Wai Monastery was an institution with over 100 years of history. With dilapidated appearance with infected by termites, the monastery has a mouldy wall and broken tiles on the floor. But those who have visited the room of Zhiding said they have seen Shi Zhiding has a nice room with 9 wardrobes of different sizes and a shelf with different skincare products. She also has a private bathroom and all her furnitures are mahogany, an expensive kind of wood. There is a 4-feet king-size bed with a quality mattress, worth of over HK$90,000.

According to their photos and videos, there is a notice of "There is Big and Small Treasure inside, please be aware and close the door". Big and Small Treasure are two female dogs owned by her. The air conditioner will be on 24-hour for them to enjoy. There are wigs and secular clothes and dresses, French skincare products and over a dozen Clarks shoes. What's more, a hairdryer.

Sing Tao reporters have tailed her for her lifestyle. She hopped on a 7-person-car on 20th and 21st September and the male driver drove her to Beverly Hills. They went together in the house, and she returned to the Ting Wai Monastery at 8 am next morning.

Shi Zhiding seldom has dinner in the past three weeks. Most of the time she ate with Shi Miaohui to nearby restaurants. 3pm, 23 September, Zhiding and Miaohui went to Sha Tin to buy a new mobile phone and had afternoon tea together, and returned to the monastery at 6:30pm. A car, EH 7××, registered by Chan Kai-yuen (and his wife), carried Shi Zhiding to the five-star hotel in Harbour Grand Kowloon in Whampoa, with another monk.

Shi Zhiding has a wonderful life if there is no ceremonies. After returning from Beverly Hills to the monastery, she will continue sleeping. When she's up in noon, she would go shopping and afternoon tea with Miaohui and even buy iPhone 6. She even demanded to install Mac computers in the monastery. Her lifestyle didn't fit the Buddhist rule.

According to the observation from Sing Tao, she was often carried by a Mercedes-Benz (RN75××) or BMW car. Often she was carried by a male driver without any company.
Posted by Azurino at 12:19