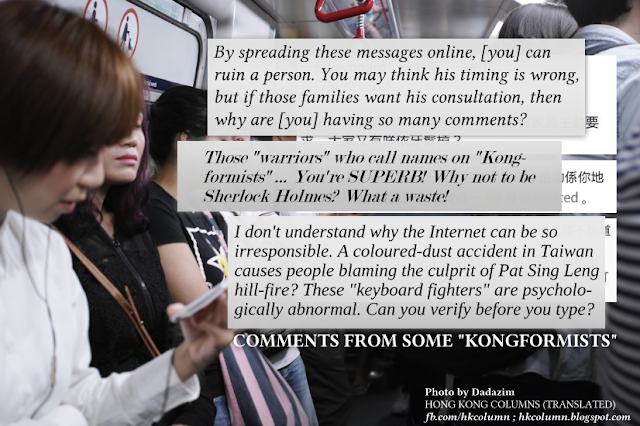 Basic info about Stanley Cheung Incident. In 1996, Stanley Cheung Yun-hang, his classmates and two teachers went to Pat Sin Leng for hiking. A cigarette butt was found, and had caused Pat Sin Leng hill fire, which caused the deaths of two teachers and three students from HKCWC Fung Yiu King Memorial Secondary School and left 13 others injured. Cheung himself was severely burned. Recently [in late June/early July], there are a lot of discussion as there was a dust blast incident in Taiwan, causing over 500 injuries, with most victims seriously burned. Stanley Cheung claimed that he was invited by Taiwan organisations and he hoped that he can encourage the victims with his past experience, yet it has caused a serious rebounce on the Internet. People also cast doubt on him, as he again tries to use his fame to promote himself even when a Taiwan netizen asked him not to go. Yet, on 30th June, Cheung brought the camera team from TVB programme The Scoop to Taiwan, which contradicts to what he said before -- "no camera during hospital visits". There were certain classmates saying that Cheung was the one who left the cigarette butt and caused the hillfire and left their comments on Facebook, but soon they were deleted by Cheung. After being accused, Cheung finally admitted he smoked back then on an interview by Apple Daily (3rd July), but denied leaving a cigarette butt, and even said "so what even if you find the truth", further aggravating the emotions of his former classmates and netizens.

The controversy over Stanley Cheung incident unveils the ethnic mentality of Hong Kong.

First, it shows the superstition towards professionals, which was bred since the 1970s. Many people think that reconstructing the news reports, Coroner's report and statements are "just a few sentences by the netizens" or "there's no cost of doing that", so they disdain such articles.

These people will share the posts from journalists, and believe in the spin doctors for Cheung in Ming Pao or Apple Daily, and disdain the evidence or reconstruction. These are superstition towards professionals. When reporters say something, the mass believes in them; but for "commoners" or online media, even if they spend lots of time to investigate on the hill-fire and to prove the discrepancy between what Cheung has said and what the victims said back then, these people will still think "it's just a few sentences by the netizens". They have the exact same attitude as Cheung, "So what if you find out the truth?"

Those who blindly follows the "professional journalists" will automatically filter the voices from "the netizens".

With fewer common sense, there are also superstitions towards other professions: Stanley Cheung studied social work, psychology and counselling. With a burnt face and his rehab experience, he becomes the "professional" and has the final say. It becomes a matter of course for him to visit the victims in Taiwan. So, they have simply neglected the common sense that victims should not be interfered by others when they were in the initial stage (not to mention Stanly Cheung's face).

A friend of mine studies journalism. He told me many of his classmates liked the spinning "coverage" from Ming Pao, which criticised netizens "writing a few sentences which involve no cost". Those journalists-to-be are, as usual, very arrogant.

As journalists think highly of themselves, those senior lecturers could make their students to believe that "the truth will and only will be shown to the world by journalists". So what they blindly support is their say. They don't understand the Internet is growing so rapidly that information is easily obtainable. We are now in 2015, not 1996, an era when people used IE or Yahoo, or "journalists" could impact people's minds with their pens.

Big channels or newspapers are not God. The truth does not necessarily have to be shown by their hands. Mainstream media no longer have the authority they used to enjoy, thanks to self-censorship and brown-nosing Beijing.

Second, the controversy has shown the "mediocrity" which a lot of Hongkongers crave for. Blue-ribbon uncles or market aunties bash the Occupy Movement because they hate "noises". Those who oppose to unveil the truth of the Pat Sin Leng Hill Fire hate the "Internet noises". They do not care about the truth nor justice, nor whether this "life warrior" has caused others' death. These people
just want the world "look peaceful" or listen only to good deeds by others. No in-depth investigation, no "noises".

You don't want noises, don't you? You just want your good old days, living happily forever, is that so? You are just like "Blue Ribbons". Don't tease at them. They listen to TVB, you listen to the "Big Stage". Stop calling the pot black, you kettle.
Posted by Azurino at 23:21