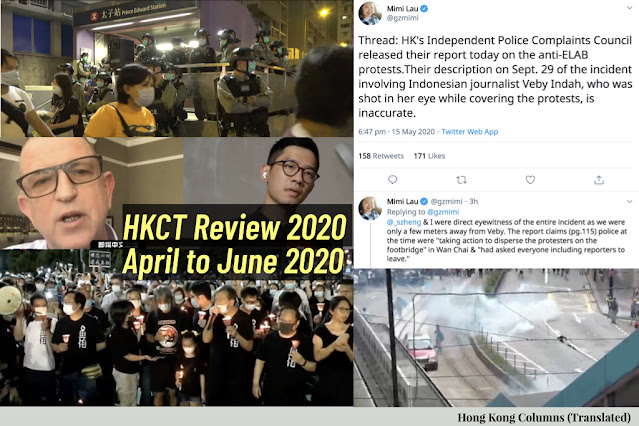 As a city that has survived the SARS epidemic of 2003, when COVID-19 first hit the city, there was widespread panic. Following the implementation of social distancing measures and a gradual resumption of facial mask supply in town, citizens somewhat adjusted to the “new normal”. However, things in the political arena continued to heat up as the score-settling from the anti-ELAB movement continued, this time targeting the outspoken activists, teachers, and civil servants. Moreover, the National People’s Congress began its deliberation of a draconian National Security Law for Hong Kong, which weighed heavily on the hearts of not only the Hong Kong people, but also sent shockwaves abroad, prompting even the G7 to voice out its concerns, and the US imposed visa restrictions on CCP officials who are believed to be responsible for, or complicit in, undermining Hong Kong’s high degree of autonomy. Despite the objections of the local people and foreign politicians and governments, the NSL was signed into law on 30 June and came into effect immediately. 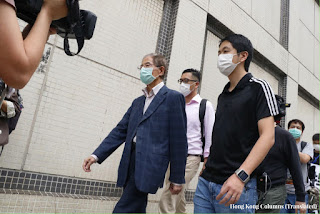 The encroachment of CPG units in Hong Kong

Securing the nation with a new law 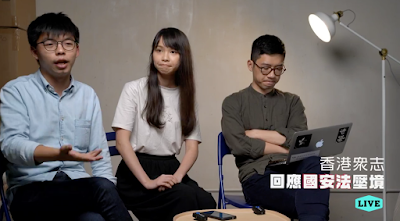 Protecting the country’s dignity by law

More than a year and a half in the making, the National Anthem Ordinance (NAO) was finally voted into law in June. Designed to regulate the playing of the Chinese national anthem and how the national flag can be used, the legislation entered its 2nd reading after a long hiatus on 28 May, same day as the NPC’s decision was handed down on the NSL, and was passed into law on 4 June after its 3rd reading (https://www.facebook.com/hkcolumn/posts/2666884236862292).
On 11 June, CE Carrie Lam was photographed signing the NAO making it officially part of Hong Kong law. A photo of Lam with Xi Jinping could be seen in the background in her office (https://www.facebook.com/hkcolumn/posts/2672414356309280). Then on 13 June, Ming Pao published the police’s internal guidelines on enforcement of the NAO (https://www.facebook.com/hkcolumn/posts/2673824119501637).

The targeting of Civic Party’s Dennis Kwok by CPG units over his role in hosting the LegCo House Committee election was severe to the point of questioning whether his behaviours were constitutional and legal. However, Kwok was resolute in continuing to serve his role as chair of the House Committee chairman election as stipulated by the regulations as deputy chair of the House Committee, going so far as to say on 23 Apr that “it is an honour to be disqualified for democracy” (https://www.facebook.com/hkcolumn/posts/2633139870236729). As an opinion published in Sing Tao showed, disqualification of Dennis Kwok was certainly on the table as the continued filibustering would cause a huge obstruction to the passing of critical legislation, such as the national anthem law (https://www.facebook.com/hkcolumn/posts/2635986049952111).
Besides procedural and administrative means, there was also a legal attempt to oust Dennis Kwok to pave the way to the election of a pro-Beijing camp member as chair of the House Committee. On 27 May, a businessman filed a private prosecution against Kwok for his alleged stalling of the House Committee chairperson election (https://www.facebook.com/hkcolumn/posts/2660264034190979). 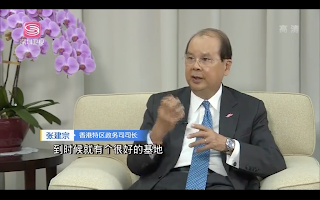 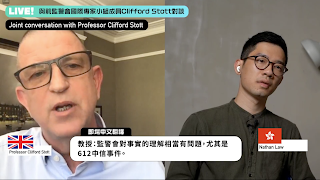 However, one of the former foreign experts commissioned to conduct the review, Clifford Stott, said on social media that the report would not suffice to allay Hongkongers’ concerns on police’s law enforcement, that “It would seem the release of the IPCC report is part of a wider set of coordinated announcements designed to deliver the new 'truth'.” Stott supported for a truly independent investigation into the incidents so that the public could really be reassured (https://www.facebook.com/hkcolumn/posts/2650437215173661).
Mimi Lau, an SCMP reporter, also refuted the IPCC report on the same day due to its depiction of the 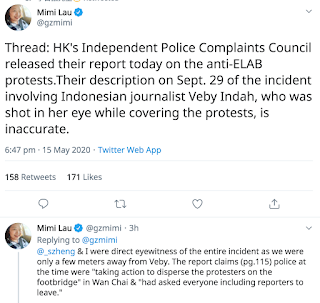 Breaking tradition of 4 June (Tian'anmen) vigil due to gathering ban 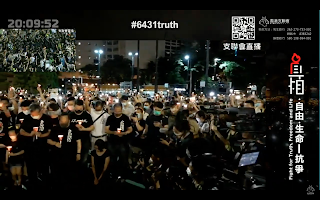 The government announced on 10 June that the LegCo election would be held on 6 September, and nominations would be accepted between 18-31 July (https://www.facebook.com/hkcolumn/posts/2671166759767373). On 18 June, guidelines for the election were released (https://www.facebook.com/hkcolumn/posts/2677785225772193).
The pan-democratic camp was eager to seize the opportunity of the LegCo election to secure more seats so that they could have more say when it came to voting on various bills. To achieve this end, the pan-democratic camp united to organise a primary election, and on 21 June, a list of candidates who had announced or who were expected to announce that they would run in the Pan-democratic Primary (https://www.facebook.com/hkcolumn/posts/2679752178908831). On 24 June, Power for Democracy announced a total of 52 lists in 5 Geographical Constituencies and 2 Functional Constituencies. It was held in 11-12 July and over 600,000 have voted. On 31 Jul, the LegCo Election 2020 has been called off due to COVID-19. 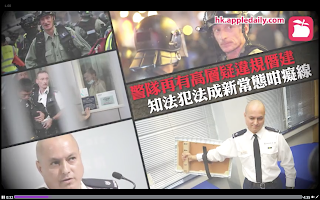 During the 2nd quarter of 2020, the police made some notable headlines, albeit for all the wrong reasons. Rupert Dover, Assistant Commissioner of the force, was suspected on 29 April of violating the Government Land License by exceeding the permitted 2-storey building not exceeding 5.18 metres in height and 37.2 square metres in area per storey. Many residents had previously asked from assistance from the Lands Department and ICAC and reported to police. However, after multiple dealings with people from the Squatter Control Office, they always got the response that investigations were underway, with no conclusion. Obviously reporting to the police would not help since the resident in the property belongs to the HKPF. After the anti-ELAB movement and Dover’s name became more well known, residents finally understood why nothing ever came of the complaints they filed (https://www.facebook.com/hkcolumn/posts/2637472333136816).
Dover later clarified that the licensed structure had been given to his wife to reside in by a relative who had given them permission to renovate and live in the licensed house years ago (https://www.facebook.com/hkcolumn/posts/2637571233126926). As for allegations there being a conflict of interest in Dover’s ownership of shares in an air-conditioning parts company, the police force declined to comment on his case citing that it would not comment on individual cases, but that if the conduct of an officer was in question, the force would conduct fair and impartial investigations and take active follow-up actions in accordance with the established mechanism and will not be biased (https://www.facebook.com/hkcolumn/posts/2637564069794309).
Besides senior force management making the headlines for days, other members of the force drew attention as well. On 20 April, news spread like wildfire on social media of a raid by the police at a flat in Oak House, Kwong Yuen Estate in Sha Tin in a case of a man suspected of possession of firearms. The arrest happened in the late afternoon, and local residents reported sounds of fighting to the district councillor at 17:00. A dozen or so police officers arrived at the scene at around 17:40, and between then and 20:36, a lawyer commissioned by a man arrested and held in the flat by the police was refused to see the man despite repeated requests, with the police saying that it was “unnecessary” for the lawyer to assist in the search of the man’s flat. In total, 8 requests to see the man by the lawyer had been rejected by the police (https://www.facebook.com/hkcolumn/posts/2630358273848222).
Later, both Principal of the Police Tactical Unit, David John Jordan, and Senior Superintendent of Police, New Territories North Region, Vasco Gareth Llewellyn Williams, were found to have suspected unlawful building structures (UBWs) (https://www.facebook.com/hkcolumn/posts/2659871544230228), and the Lands Department responded on 27 May saying that after inspection, since the UBWs did not pose any immediate danger, immediate demolition would not be ordered.
On 22 April, the UK Parliament received a report on the human rights violations by the Hong Kong Police Force drafted by Civil Rights Observer (https://www.facebook.com/hkcolumn/posts/2631601307057252). The 14-page report detailed blatant abuse of power and violations of protected rights and freedoms of protesters, social workers, first-aiders, and even human rights observers. For example, officers had attempted to instil fear in protesters by asking them, “Do you want to become another ‘floating corpse’?”, delaying access to legal counsel to human rights observers, preventing first-aiders from treating injured persons, and forcing arrestees to choose between meeting a lawyer and getting medical help.
On 28 April, in response to an enquiry by then-legislator Lam Cheuk-ting, the Independent Commission Against Corruption (ICAC) said that as at the end of February this year, it was handling 28 suspected corruption cases involving civil servants in the cases related to anti-ELAB movement, of which 26 involved police officers (https://www.facebook.com/hkcolumn/posts/2636490186568364).
Come May, former legislator Eddie Chu said on social media on 11 May that 2 properties owned by Police Commissioner Chris Tang were suspected of illegal structures. On the following day while attending a Yuen Long District Council meeting, Tang said that he would fully cooperate with any department’s investigation (https://www.facebook.com/hkcolumn/posts/2647866598764056).
Blind lawyer Luk Yiu-fai told Sha Tin District Council on 14 May that she was mocked and insulted by an officer on 1 May when she was monitoring a “Sing with You” event at Sha Tin New Town Plaza in case of police brutality (https://www.facebook.com/hkcolumn/posts/2650825361801513).
On 7 May, the police made the headlines again, also for the wrong reason, in that a police sergeant from the Anti-Triad Unit was arrested for possession of meth, coke, and other drugs at a hotel (https://www.facebook.com/hkcolumn/posts/2643732412510808).
During the anti-ELAB movement in 2019, police were accused of sexually abusing protesters. On 24 June, Elmer Yuan Gongyi posted a video “To the World: The Raping of Hong Kong” in which 5 alleged victims shared their sexual assault trauma conducted by the HKPF (https://www.facebook.com/hkcolumn/posts/2683480505202665).
On 26 June, the police again made it on the news when the court heard in a judicial review of the police not displaying their serial numbers while on duty and thus affected the media’s ability to conduct public monitoring, the government lawyer argued that if there was a complaint, the established mechanism should be used to “give the system a chance” (https://www.facebook.com/hkcolumn/posts/2684815685069147).

On 24 April, District Court judge Kwok Wai-kin handed down his verdict in a case of a 50yo man who attacked 3 people in a pedestrian tunnel in Tseung Kwan O, sending one of the victims to the ICU. The defendant admitted 3 counts of wounding with intent, but Kwok spent a third of his verdict condemning protesters and the Anti-ELAB movement of 2019, blaming that the case would not have happened if the protests didn’t happen, and so the defendant’s sentence was reduced by a third to serve 45 months in jail. Moreover, more than a few eyebrows were raised when Kwok described the defendant as having “noble sentiments” and acted in a way "rarely seen in other highly educated intellectuals and professionals" (https://www.facebook.com/hkcolumn/posts/2633481996869183).
The first protester of the Anti-ELAB movement who admitted to rioting was sentenced on 15 May to serve 48 months in jail, 3 months longer than the 50yo man who attacked and injured 3 people in a pedestrian tunnel in Tseung Kwan O (https://www.facebook.com/hkcolumn/posts/2650889568461759). The defendant, a 21yo lifeguard, was slammed for waging a “direct attack on the rule of law.”
On 18 June, former legislator now in exile Ted Hui told the press that the Eastern Magistrates’ Courts notified him that the court has granted a hearing in his private prosecution of a police officer who shot a young man in Sai Wan Ho on 11 November 2019 (https://www.facebook.com/hkcolumn/posts/2677883629095686). 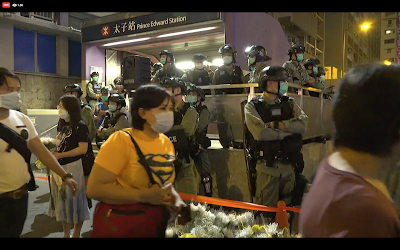