Paul Harris: We Mustn't Give Up; Calls HKNSL “Disgrace”, Plans to Persuade Gov to Amend even It’s Hard 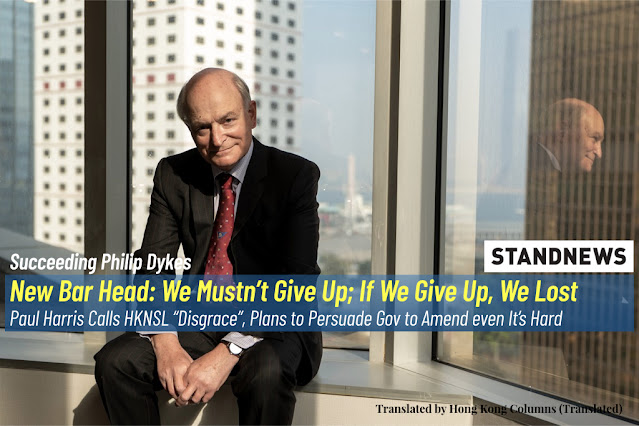 Paul Harris, 68, a veteran barrister, was elected unopposed as the new Bar Association President on 21 Jan, succeeding his predecessor, Philip Dykes.
Speaking to the media after his election that night, Harris said that the Bar Association and the rule of law in Hong Kong were facing a difficult time, adding in Cantonese, “I am worried that Hong Kong's freedom will not continue. I will try to protect freedom in Hong Kong, I will try my best. I don't know if I'll succeed.”
Taking over the baton at a time of turmoil entails an unpredictable course of challenges. In an interview with Stand News the morning after his election, he confessed that until early December last year, he had never thought about becoming chairman of the Association.
“But many senior members of the Bar came to me and asked me to run for the chairman seat, and they were very convincing. I guess they wanted my background in human rights law, and they were thinking that someone with absolutely no relatives in mainland China would be a good candidate.” As far as Paul Harris knows, no one had been willing to take over the chairmanship until he was approached by his peers. “I guess it has something to do with the fact that the situation of the rule of law is so difficult now,” he said.
After he was elected that night, he said he hoped that during his term he would be able to negotiate with the government for changes to some of the provisions of Hong Kong's national security laws. In an interview with Stand News, he also said that he hoped that fighting for the resumption of extradition agreements with European and American countries would be an incentive for the government to consider amending those provisions of the National Security Law that are clearly in conflict with the Basic Law or the spirit of the rule of law.
“But I have no illusions — this will be a very difficult, if not impossible, task," Paul Harris said, "but the constitution of the Bar Association says we have to defend the rule of law and that is what I will try to do... But I am clear in my mind, that's got to be my main task.”

- Independent ruling by the courts? Harris: confident and concerned -

Beyond the content of the legal provisions, how the court interprets them also affects their substantive impact. Harris is currently representing Adam Ma Chun-man, who has been charged with "inciting secession” for allegedly chanting slogans. In his bail application for Ma, Harris argued that the "act without the use of force" in Article 20 of the National Security Law meant a serious unlawful act, but that the defendant was only chanting slogans and "peacefully advocating secessionist ideas", and that he should be granted bail. However, the trial judge, Alex Lee, found that the provision had already stated that force was not an element of the charge of secession, and that Harris had misinterpreted the provision.
Paul Harris told Stand News that if the prosecution's understanding was that it was an offence to call slogans or write articles advocating Hong Kong's independence, this would be inconsistent with the freedom of speech guaranteed by the Basic Law. He argued that to strike a balance between the national security law and the Basic Law, the interpretation of "non-forceful acts of secession" should be narrowed to include only unlawful acts such as sabotage of infrastructure and computer hacking. But he said that the final interpretation of the national security law would have to be determined by the courts.
“But if the way the government is interpreting the law, you will be arrested if you shout for independence, it is very offensive and creates a very bad atmosphere in society.”
The new Chief Justice of the Court of Final Appeal, Andrew Cheung, responded to the media earlier, saying that the Hong Kong courts are "battle-hardened" and appealed to the public to trust the courts' ability to interpret national security laws in accordance with common law principles. Does the new Chairman of the Society have confidence?
The courts in Hong Kong have become very accustomed to having to interpret the Ordinance or the Basic Law, according to Harris, but when it comes to national security law, it depends very much on the relationship between the national security law and the Basic Law, and the answer is still very unclear. “Do they have the same legal status? Or does the Basic Law have higher status? When we ask this question, is the answer based on the Mainland law? Or is the answer based on Hong Kong law? This is undoubtedly a very unclear and difficult issue. So... I don't know what the court will ultimately decide.”
What's more, the National Security Law states that the power to interpret the law rests with the Standing Committee of the National People's Congress. “My biggest concern is not that the CFA cannot defend the interests of the people, but that it can still be overturned by the NPC Standing Committee in the end. This is one of the shortcomings of the Hong Kong system,” he continued.
In recent years, the court has ruled on sensitive political cases, with local newspapers controlled by the Liaison Office and even Mainland authorities making remarks ahead of the verdict from time to time. Before the NPC Standing Committee intervened, could judges' decisions be free from the influence of central government pressure? Harris described himself as "confident and concerned".
He also criticised the newspaper Ta Kung Pao for its absurd accusations against judges: "Most judges ignore these pressures, but they can still have an impact. Especially when people try to harass judges in their private lives and even their families, it's a horrible and disgusting campaign.”

- The call for judicial reform is to undermine judicial independence” -

In early September 2020, Henry Litton, former CFA permanent judge, wrote an article “For Hong Kong’s sake, the judiciary must regain Beijing’s trust”, in which he wrote: “consistently, the courts have subordinated the common good to the assertions of personal right” and “The courts have, in effect, helped to create the social environment leading to the mayhem wrought on the streets over the past year.” He also said ruling in the anti-mask law case last year showed “total insensitivity” to the policy of “one country, two systems”.
Litton also said, “How did it come about that Beijing has developed such mistrust of the Hong Kong judiciary? The courts have put a slant on the Basic Law, by applying obscure norms and values from overseas which are totally unsuited to Hong Kong’s circumstances.” He ended the op-ed on SCMP by calling for urgent judiciary reform.
Zhang Xiaoming, Deputy Director of the Hong Kong and Macao Affairs Office, subsequently praised the article, saying that the Hong Kong judiciary needed to be "reformed". What followed was a wave of criticism of Hong Kong courts and even attacks on individual judges from the pro-China media, the pro-Beijing camp and Mainland scholars, who accused the judiciary of using judicial independence as a pretext for being unregulated, allowing "yellow judges" to make "absurd judgments" and “let rioters off the hook”, and called for the establishment of a "Sentencing Commission" and a “Judicial Officers Supervisory Commission”.
In response to calls for judicial reform, former Chief Justice Geoffrey Ma and Chief Justice Andrew Cheung both reiterated the principle of an independent judiciary and stressed that the current appeal mechanism was more effective. In a recent interview with Stand News, the former chairman of the Bar, Philip Dykes, also reiterated the need for the legal profession to monitor unfounded criticism.
But the more important question is whether the pressure on the judiciary today is the result of systematic pressure from Beijing, or perhaps even the beginning of a complete overhaul? Harris thinks the answer is yes.
I don't think these 'concerns' about 'reform' are really about the quality of justice. The purpose of 'reform' is to undermine judicial independence, which is one of the few remaining defences against the absolute power of the executive in Hong Kong. As for the pro-Beijing legislators’ proposal to set up a 'sentencing commission', Harris said they "have no idea how the [judicial] system works.
However, in an era of extreme politicisation and sensitivity, it seems that people's understanding of the justice system is dependent on the court's decision on the case, with convictions and lenient sentences shaping people's conclusions about the current state of justice. He warned that it is "very foolish" to comment on a case simply because of a news report.
The journalists asked Harris what more the legal profession could do, given that the Judiciary and the Bar Association have issued numerous statements reaffirming the principle of judicial independence in the past, but this does not seem to have helped restore public confidence. Harris believes that it is still very important to reaffirm the right principles.
"Everyone in the legal profession needs to continue to reaffirm these principles... about how judges work, that judges should be independent, and that they get very detailed sentencing guidelines from the cases.

What are the Bar Association's key issues for the coming year, apart from the National Security Law, as new officials take office? “In these uncertain times, it is difficult to say what long-term plans there are, as we do not know what is going to happen in a few months' time,” he said.
Harris said “Last year, no one expected the sudden ousting of four lawmakers, which was a shock. They are good lawmakers. But the seats were suddenly cancelled without due process, as if Beijing had just given the order.”
“I don't know how many unprecedented things will follow, I hope there will be some good news, but at the moment the road ahead looks a bit gloomy.”
Apart from the judiciary, the Bar Association itself is also a frequent target of criticism by the Communist Party’s mouthpiece. Asked if he was worried about a political score-settling one day, Harris said the Bar Association is not a political organisation, but a professional body concerned with the rule of law, which is now seen as a highly politicised issue.
“We are living in very uncertain times and it is impossible to predict what will happen [afterwards], things look gloomy.” Nevertheless, Harper says he will continue to try and sends a message to his peers: "Do not lose hope - if we give up, we lost. We have to keep on trying. Hong Kong's legal system still has resilience and it’s a good system that’s worth fighting for.”.
Posted by HKCT at 16:23