Sentenced to 16wks of Jail for 9-Jun Clash outside LegCo, Loses out on PhD Studies at Yale, CUHK Philosophy Student: Not a Matter of Regret or Not

18:37 20 Jan: Sentenced to 16wks of Jail for 9-Jun Clash outside LegCo, Loses out on PhD Studies at Yale, CUHK Philosophy Student: Not a Matter of Regret or Not
Translated by HKCT, written by Isaac@Stand News
Original: Stand News/Isaac 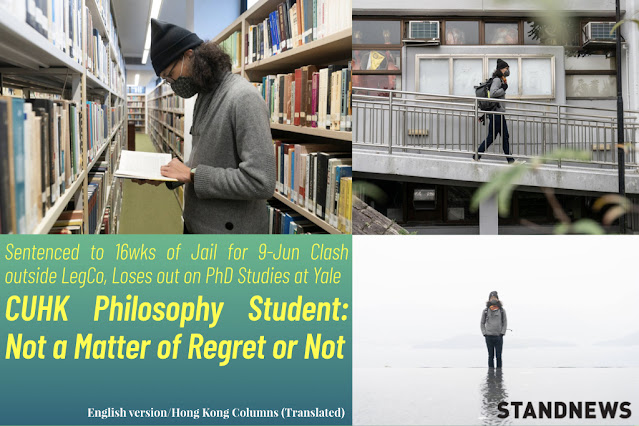 “I recently bought many new books to bring with me there. I prepared (per Correctional Services Department’s guidelines) of 6 books per month. Some of them are philosophy books related to my research, while some are social science and science books recommended by friends. I want to fill in some gaps in my knowledge.”
CUHK philosophy master student Ling (pseudonym) was one of the 1.03 million people who marched in the march on 9 June 2019. After the march, having heard a cry of “We need people under the Rice Cooker,*” but shortly after reaching there, police officers broke through the blockade and swarmed in to subdue Ling and several other defendants of the same case.

The scene of “7 cops in the dark corner^” ran through his mind, and he could only use his hands to protect his head. Luckily, only his glasses became crushed. Together with 6 others, Ling was brought inside to kneel against a wall of LegCo, and he knelt there for 5 hours straight. In November 2019 when he reported to the police station, he was officially charged with unlawful assembly, accusing him of having stacked some barricades together.
A year and a half since the event, on 13 Jan this year, Ling chose to admit to the charge in court. In his defense, his lawyer said that he graduated with first-class honours, and had received 18 scholarships within 3 years, and could lose out on a chance to study a PhD degree at Yale University. CUHK Vice-President Dennis Ng also wrote a plea letter for him, saying that Ling was “one of the most brilliant student leaders he had seen.”
The Magistrate said that the plea letter was moving, hence reduced Ling’s sentence by 3 weeks. Ling was eventually sentenced to 16 weeks of jail.

23yo Ling is a direct young man. When the reported sent him an invitation to interview, he agreed to it within 3 minutes. He spoke at a steady pace, often citing references. Perhaps out of habit, he would organise his speech in syllogistic arguments often used in philosophy – starting with a major premise, then a minor premise, followed by a conclusion. After the interview, he thanked the reporter with a polite, slight bow.
Although by appearance – a scholarly look about him – Ling would seem to fit the stereotypical idea of a philosophy student, he was vastly different from the common stereotype of philosophers as “all talk and no action”. Besides discussing current events and offering mutual support, many CUHK philosophy students applied their theories and principles in person during the social movement.
“By percentage, our (CUHK) Department of Philosophy had quite a few people arrested. I don’t know why, but we just kept having people arrested, haha,” he said jokingly.
“During these times, more philosophy students felt the calling from their training, feeling like they should do more, with a stronger sense that they should take matters into their hands.”
Ling said that this motivation stemmed from their common character, “We all have a sense of justice. We all feel that the pursuit of justice was very important, and we’re willing to spend the time and energy to achieve that.”
Ling was the first defendant in his case, and the 3rd defendant of the same case was also a graduate of CUHK Philosophy, who used to be Ling’s roommate.
On the day of sentencing, nearly 30 young people stood outside the court, some wearing a “PHILOSOPHY” hoodie. There were so many people that the Magistrate’s Court on a rare occasion needed to open a remote court to allow those who could not enter the designated courtroom to watch the proceedings via live broadcast.

Ling was arrested in the wee hours of 10 Jun 2019, and was probably among the first batch of arrestees in the anti-ELAB movement.
The years of deep-seated problems between China and Hong Kong, issues with livelihoods, had already fueled the fire among citizens to the brim. On 9 Jun 2019, the anti-ELAB movement ignited the fire.
Ling said frankly that the sheer number of the crowds that turned out at the march that day made him feel “very happy”, and it was an important moment when he saw a social movement in Hong Kong blossoming and coming to fruition. He said gratefully, “I realised that the street booths that we set up over the past two months worked, and had been effective to make citizens understand this (ELAB). When citizens really understand what’s going on, you will have real political participation.”
The start of Ling’s involvement in politics began much earlier than ELAB. As early as the “Anti-National Education Storm” of 2012, he had come to realise that “As a Hongkonger, you must care for society.” He was only a student in early secondary form then.
In the Umbrella Movement 2 years later, the police launched 87 rounds of tear gas to disperse the crowd. Still a secondary school student at the time, Ling took the effort to seek out information about the police’s guidelines of use of appropriate force, and took the initiative to write an article in the student newspaper; he also shared with his fellow students under what circumstance could tear gas be used, and was considered “proportionate force”. He sometimes would walk around the occupied areas.
To Ling, participating in social movements was a form of making clear his stance, and was also a chance to reflect on his own political consciousness. “For instance, during the Umbrella (Movement), I would think a lot about what constituted the so-called ‘civil disobedience’ and ‘peaceful protest’. What did the entire movement achieve in the end? When would we feel that the movement could come to an end? Why did the Umbrella Movement fail in the end?”
These questions inspired Ling to seek out answers form books, articles, and other countries’ histories and experiences, search deep within his political consciousness, to brainstorm what sort of changes Hong Kong needed.

Change might seem too distant. Now in Hong Kong, everyone still covered their faces with masks, but the streets had become nearly deserted and shouting could rarely be heard. Some uprooted their families and taken them abroad, while others were exhausting themselves to raise their family. Some were put behind bars, while others had charges against them dropped by the Department of Justice. The laws had changed, and it now seemed that anyone could become the target of the next raid. No one knew on any day waking up how many news notifications would pop up on their phone, reporting another number of people having been arrested at their homes.
Ling watched all the latest developments, “Every little chance to demean you, they (the political regime) would not let go.”
Now, what replaced the peace on the streets was a heaviness in the heart. Since the depression after the Umbrella Movement, Hong Kong’s social movement again plunged into a phase of wordlessness and helplessness. Many asked: Where do we go from here?
Ling admitted that a perilous path laid ahead, “Too many small nations had disappeared in the course of history. Their so-called resistance and sacrifice, no one really gives a shit, and these nations had been swallowed in the sands of time.”
Nevertheless, he was not pessimistic.
The premise of despair and helplessness laid in someone really wanting something to happen but it could not happen. For the fate of Hong Kong, it would seem like the tides would not be turning anytime soon. “But I don’t think this is too important…you don’t need to say ‘We’ll see such and such happening during our lifetime’, or speaking like Simon Lau Sai-leung or Stephen Shiu Yeuk-yuen that ‘The next two weeks are crucial’. Such thoughts are completely unnecessary.”
“The movement had never talked about such things, it had always been centred on an ideal, which will become manifest through your work.”
Ling begins a series of self-questioning, “When will this be achieved? No one knows. When will we succeed? No one knows. Will we be successful? No one knows. But we still have to do it!”
If everyone worked towards a common goal in their own ways, then feelings of helplessness was just a false proposition, and that the key laid in adjusting your mentality.

To Ling, the question was not to chase after a certain goal, and also not “What sort of place shall Hong Kong become”. Instead, he focused on the contrary in contemplating “What sort of core values should Hong Kong retain”.
He felt that the right to rule in a place was a prerequisite for democracy, and with democracy in place, there could be civil rights and freedoms. However, the discussion on right to rule would probably be out of the discussion for the current generations of Hongkongers. “However, to me, you need to reinforce the relationship between the different stages.” This, he suggested, could be done from the personal stance, building a civil society based on the small stuff in life, protecting civil rights and freedoms.
Ling felt that as long as we all held the same core value, then there could be more possibilities for Hong Kong’s future. However, there should also be an acceptance of various differences. “There should be a minimal number of shared values, because the more shared values there are, there would be disagreements.” The reason why the Anti-ELAB movement of 2019 managed to grow to such a large scale was that it could “unite people from all walks of life and stances behind a simple value. This value, was our strive for Hong Kong people’s political freedom.”
“If you love Hong Kong’s successful, perhaps to some, a comfortable environment, and you realise that such an environment was built by freedoms in life, and you are willing to protect political freedom, which had been built upon the existing freedoms, then this is Hong Kong’s core value.”
* * *
Footnotes:
* Rice Cooker is a nickname for the protest area outside LegCo Complex
^ On 15 Oct 2014, 7 officers were filmed on live news for allegedly having beaten protester Ken Tsang in a dark alley, and the case became one of the most high-profile incidences of police brutality since the Handover, see HKCT’s previous report here: https://www.facebook.com/hkcolumn/posts/2618855044998545
Posted by HKCT at 14:16