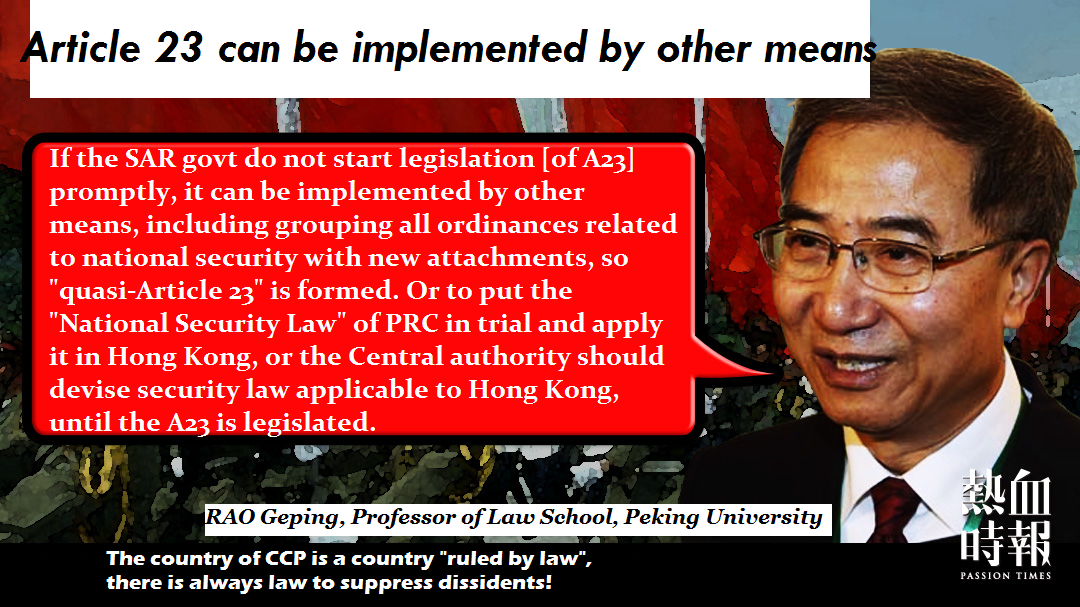 RAO Geping, the legal "pundit", once said that it is practicable to introduce the PRC National Security Law (NSL) through the Annex III of the Basic Law. Alan HOO, the Director of Basic Law Institute and the member of CPPCC, has sided with Rao. He said the pundit wants to remind Hongkongers, that in the state of emergency,  if the NSL is introduced, the Hong Kong Garrison of PLA can work on a legal basis, so as to do their duty and maintain law and order. He even said if Hongkongers do not want the introduction of NSL, they should soon get the legislation of Article 23 (A23) done. It means Hongkongers must either drink some stinky urine or eat some shit, which is to put Hongkongers in jeopardy.

CCP is like ants in the pants for the legislation of A23. If the "neither-pee-nor-poop" logic of Alan Hoo stands, I think Hongkongers can adopt such tactic: "Scorched Earth Policy". We shall go against A23 still, and to live with Hong Kong. We need no pee or shit, and can bluff CCP. On what grounds can we bluff CCP? If ever Hong Kong have to use NSL due to the dire state of emergency, Hong Kong would be a cock-up! NSL is the harshest Draconian code. If it applied to Hong Kong, the territory would be completely controlled by China, and there would no longer have such a thing as "One Country, Two System". More than a mess as you could assume.

In China, CCP uses "Subversion of the Nation" in this code to frame dissidents. Even Hoo knows how poisonous it is, and Hongkongers all fear of it, that's why he chooses to intimidate Hongkongers by this. HAN Shubin, the Procurator-General of the Supreme People's Procuratorate, concluded his own work between 1998 and 2002 in 2003, he disclosed that there were 3,402 suspects of such "subversion", but the number of those who were prosecuted were 3,550. There are more people being prosecuted than arrested. Arrest and prosecution were conducted all year round. If NSL was introduced during to "riots", then it rang the knell of Hong Kong. Collapse of stock market. External flow of capital. Rich men away, not to mention the flunkeys of the CCP. Hong Kong will become a dead city with ruins and remains. The Central CBD will be nothing but a piece of scorched earth. It won't matter if PLA march into the city then.

CCP wanted to cull the financial hub in the south, but the biggest loser would be CCP itself, as the market value of Chinese enterprises are worth billions or trillions. China will then fall into the turbine of financial mess. Surely, you can easily get the picture when CCP has such amount of threats. Does CCP dare to play the game with such a high bet to its regime?