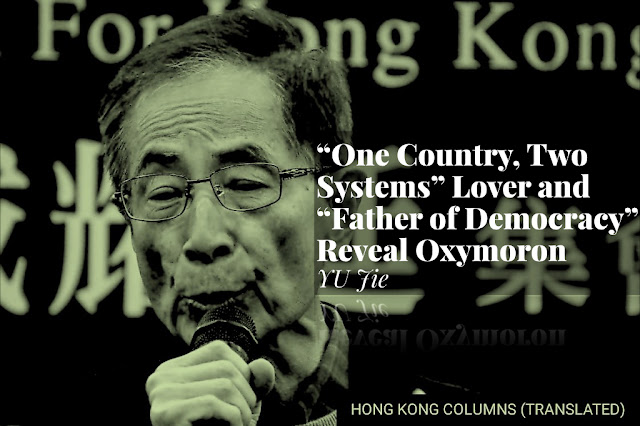 When Martin Lee, “father of democracy” in Hong Kong, was interviewed in Taiwan, he commented that CCP shall consider reverting to the original blueprint for “One Country, Two Systems” as its tightening control over Hong Kong is costing Hongkongers’ sense of belonging and has slowed down the advancement of the system in Taiwan.

For a veteran politician and barrister, Martin Lee’s behind-the-times remark was so embarrassing that it cannot even level with those pseudo-reformists in mainland China. Trapped in a Sinocentrism/democratic-reunification ideology, he has lost touch on the pulse of China, Taiwan and his home Hong Kong. His time must have been frozen either before 1997 or 1989 to have granted him untainted confidence to such lovely speech. His past contributions and achievements are respected, but his speeches and actions preventing the new generation to move forward have made him an unjustifiable “father of democracy”.

Asking a Tiger for Its Skin
It is in Marin Lee’s ideal that “Hong Kong people rule Hong Kong”, “a high degree of autonomy” and “maintaining Hong Kong’s way of life largely unaltered for 50 years” are duteously embodied in Deng Xiaoping’s “One Country, Two Systems”. He added that Hong Kong people is losing faith in today’s central government as it goes back on its words and changes everything in Hong Kong. Living under the “great purge” in Xi Jinping’s regime, many, Martin Lee included, shows the very picture of missing the good old days, seemingly undisturbed by Deng Xiaoping’s doing in the Tian'anmen Massacre 30 years ago.

The true nature of Deng Xiaoping is somehow embellished in Martin Lee’s thought. Xi Jinping’s leadership is despotism; so does Deng Xiaoping’s. Taking stock of the situation, the two paramount leaders have strategies employed differently from each other. In times of Deng Xiaoping, China was not yet one of the world’s most powerful countries, and it was still busying befriending everyone there was. He would be willing to sugarcoat the country’s ultimate goal just to wheedle Hongkongers into embracing the idea of Handover. Today, in the era of Xi Jinping, a would-be rise of power, the leader could not care less about throwing down the gauntlet to Hong Kong and the rest of the world. Xi Jinping was in fact going full steam ahead, not backward, to what Mao Zedong and Deng Xiaoping have planned for the future of China.

On 4 June 1989, it was by Deng Xiaoping’s direct order that the tanks and machine guns were brought in the Square to suppress the protests. He can be called a killer, murderer or butcher, causing the death of thousands of people on the spot without batting an eyelash. If he was to be trusted and given full recognition, holding the memorials year by year would be shooting the participants themselves in the foot.

Xi, Proud of Being a Dictator
“I believe Xi Jinping is wise enough to tell that violence is not the way out,” Martin Lee optimistically said as he appealed to the central government for implementing genuine democracy in Hong Kong. This could showcase, as Martin Lee suggested, Xi Jinping as an open-minded reformist leader. A fine line between being naïve/innocent and over-confident/narcissistic catches Martin Lee off guard, making him switch back and forth from a “patriotic remonstrator” to an “animal trainer”, and vice versa.

Similar examples are found throughout the history. There was Qu Yuan during the Warring States period of ancient China who felt extreme despair to the then political situation and took his own life as a form of expostulation. It was his point-blank refusal to admitting tyrant in authority that led to his “sacrifice”.

On an ancient Chinese text Han Feizi’s account, a man named Bian He found an invaluable piece of jade in Chu’s mountains, and made his offer to King Li of Chu. The King thought it was a mere stone, so he punished Bian He by having his left foot cut off. When Wu came to the throne, Bian He once again offered his jade to the King and ended up having his right foot cut off. Years later, Wu’s heir Wen was informed of Bian He’s grieving with tears for three days and three nights, and he sent his man to question Bien He. “I’m not grieving for my feet. I’m grieving for the wrongs that a precious jade is called a regular stone, as a loyal subject is called a liar,” Bian He replied. Possibly moved by his words, King Wen of Chu had his jeweler cut open the stone and surprisingly found a piece of pure jade inside. Upon seeing it, the King named the jade He Shi in honour of Bian He.

Yet from my years of study, the Xi Jinping Martin Lee has hoped for has come too far to being another King Wen of Chu. Gambling a pair of feet on such a leader does not have much chance to secure a promising future.

Hong Kong Independence Represents a Bright Time to Come
On the issue of Hong Kong independence, Martin Lee deviated from the spirit of rule of law to separate independence as a major part of democracy. The rise of such idea, in his understanding, can be explained by the lack of belief in “a handful of people” to strive for democracy in the democrats’ discipline. Without the central government’s approval and support, independence is “impossible to attain” and “not an option for Hong Kong”. All these get one to wonder what the “father of democracy” or his preferred “grandfather of democracy” is made of when he is convinced that the fruits of democracy can grow without the tree.

In Martin Lee’s theory, independence is like a pillow that disappointed Hongkongers fall on and shed tears on; if not under CCP’s oppression, there will be no need for the negativity-soaked pillow. More and more people beg to disagree as independence mirrors the entitled self-determination of any district plainly stated in The Universal Declaration of Human Rights. The awakening of the independence movement in Hong Kong shares the noble values with the rest of the world. It will be best for Hong Kong if and only if Hong Kong cuts ties with China.

Culturally and politically speaking, waves of hardships are to be encountered head-on and we shall stay strong. And there is still a long way to go before the campaign of Hong Kong independence surpasses theoretical grounds and propagation. Active exertions from our own kind are sufficient, while the realization of independence does not come easily unless big changes in the international environment (e.g. China’s disintegration) are involved.

If Martin Lee still feels that independence in Hong Kong stands without a chance, he might want to take a look at Edmund Burke’s speech on the Thirteen Colonies. When the Proclamation of Rebellion was issued to order officials “to use their utmost endeavours to withstand and suppress the colonial revolt”, the then member of the British Parliament criticized, “What advances have we made towards our object, by the sending of a force, which, by land and sea, is no contemptible strength? Has the disorder abated? Nothing less.” Burke was aware that “the removal of the causes of this Spirit of American Liberty be, for the greater part, or rather entirely, impracticable.” And he added, “I should hold myself obliged to conform to the temper I found universally prevalent in my own day, and to govern two million of men, impatient of Servitude, on the principles of Freedom.” These are what a “father of democracy” should have said to Xi Jinping.

Someday when most of Hong Kong is equipped with the “prevalent temper” that is “impatient of Servitude”, our home will make impressive strides in resisting China’s tyranny. By then, Hong Kong independence will be a feasible vision.
Posted by Azurino at 22:58