Allan Au: After the Oath, You Belong to Me 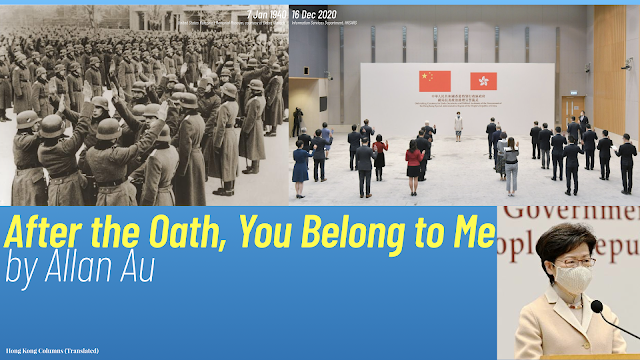 (left) In Poznan, ethnic German recruits to the German army swear allegiance to Adolf Hitler. January 1940. (original)
(right) The Government of the Hong Kong Special Administrative Region held an oath-taking ceremony for Under Secretaries and Political Assistants at the Central Government Offices today (December 16). Witnessed by the Chief Executive, Mrs Carrie Lam (centre), all the 12 Under Secretaries and 14 Political Assistants swore to uphold the Basic Law of the Hong Kong Special Administrative Region of the People's Republic of China and swore allegiance to the Hong Kong Special Administrative Region of the People's Republic of China. (original)
On 16 December 2020, all HKSAR government's under secretaries and political assistants lined up and took an oath in front of Carrie Lam to uphold the Basic Law and pledged allegiance to the HKSAR.
This was the government’s Christmas and New Year present for all civil servants. Under the wrapping paper of the oath hid a leash. Soon, similar scenes will probably take place again and gain in scale.
This reminds many of the past when Adolf Hitler rose to power, the German military and civil servants also introduced the requirement of an oath swearing loyalty to Hitler himself with a solemn, grand ceremony. Is this comparison exaggerated?
I still recall in 2017, I read the book “On Tyranny” and wrote “Last Time to Make Love”, in which I used the sentence “When you made love for the last time, you didn’t know it was your last time” as a metaphor to describe history. There were many times when “you voted for the last time, you didn’t know that was your last vote”. Someone asked at that time if it was a bit exaggerated.
After less than 2 years, Hongkongers had their last meaningful vote. It was the 2019 District Council Election. When we voted for the last time, we didn’t know that was already our last fair election.
Everything has been written or said and there is nothing more to add. Seeing all these Hong Kong elite raising their hands and taking the oath, although there could still be some good ones among them, I could only write more reading notes to On Tyranny, and read again those I had written on 2 of the author’s 20 warning lessens to the world:

First lesson: Do not obey in advance

Authoritarian governments’ powers are offered by the citizens. It is humanity to obey, ordinary citizens like guessing the minds of those in power and flattering them. Even before they start to speak, many people already dedicate themselves. These people’s behaviour is often a huge inspiration for those in power. Many dictators are not fully confident with themselves, but when they find out the true humanity that many bow down to the more powerful or even take the initiative to act in obedience, this gives the thugs enough confidence to judge that there is little resistance to carry out tyranny, and they become more determined to do whatever they want. These people who automatically become obedient give authoritarian governments a shot in the arm. (Note: Recently Carrie Lam said, “She regained confidence.”)

The professionals always talk about noble dreams, and should be careful not to become accomplices of those in power. The tyranny in the past could not have succeeded without the help of a “professional” team. If lawyers, judges and law enforcers had insisted on open trials and implementing no illegal death penalties, there would not have been 6 million Jews killed; if doctors had insisted on gaining consent on any kinds of operation, there would not have been living people used in medical experiments in concentration camps. Nazi Germany had a quite complete documentation of its killings. If civil servants had been willing to follow regulations and had not handled correspondence related to crimes against the law and constitution, Hitler’s tyranny would not have gone so smoothly.
There were many famous people around Hitler. Coincidentally, they were all trained lawyers. Hans Frank was his personal lawyer and later governed the occupied Poland, millions of Jews and Poles were murdered on his hands. He once said the law served the nation, so everything advantageous to the nation was lawful. In modern China’s way of saying, that means to “use the law as a weapon”. To them law has no noble philosophy, there is no spirit of rule of law and no need for judicial independence. Very often exactly people who are lawyers know how to exploit loopholes most effectively. Today the HKSAR government is desperately looking for “legal resources” to take action against some people, there must be a group of legal elites behind it who have forgotten their professional ethics. (Note: There are now a group of police officers, lawyers, prosecutors and judges behind on all fronts.)
Posted by HKCT at 21:34