Julian Yip: That's How Our Next Generation Grows

That's How Our Next Generation Grows
Translated by Chen-t'ang 鎮棠, Written by Julian Yip
Original: http://www.passiontimes.hk/article/01-17-2015/20621 In a district consultation forum back in 2013, 689 (Translator's note: nickname of CY Leung, as he only gained 689 votes) said, "If a four-or-five-year-old kid asks CY, where should he live after marrying...." The kid popped up.

When kids in Hong Kong have grown to five, besides thinking about the land and housing problem, they need to learn how to "love China", according to the Our Lady's Kindergarten in Wong Tai Sin.

When the kids do not even know how to love their parents, you need to learn the concept of "nationalities are based on countries". When the kids might not know how to write their own names properly, they have to write "I am Chinese". You are what the teachers said - Concept of "Hongkongers"? Excluded.

CY Leung has supported the establishment of "HK Army Cadets Association" as an honorary sponsor. His wife, Regina Tong, will be the chief commander of the army cadets. A secondary school has issued a notice, urging Form 1 students to attend this activity. In Hong Kong, after you have understood the concept of "nationalities are based on countries" and thought about land and housing problems in Hong Kong, you now have to participate in activities of New Red Guards. Selfish adults earn piles of Renminbi by messing Hong Kong around, but they are not satisfied yet. They turn kids into victims, and ruin their childhood by sending them on the way to flatter the Communist Party.

It is already bad when these adults do not prepare a better growing environment for the kids, why are they so brazen-faced to take advantage of the kids and curry flavour to China? They are utterly not ashamed. How will our next generation grow in a world where adults can be so unprincipled, selfish and immoral?

Adults who are counting Renminbi notes will say, "The most important thing is that I can earn money." 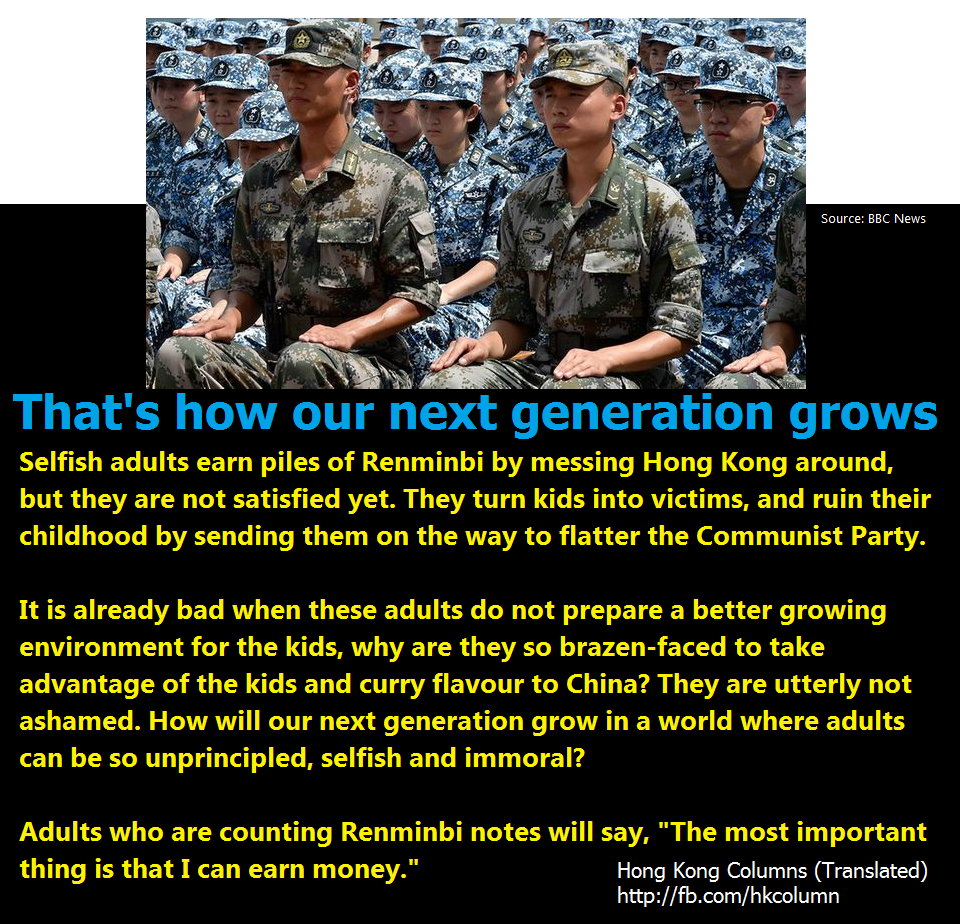