Kevin Chu: On the Role of "United Front"

On the Role of "United Front"
Translated by Karen L., Edited by Chen-t'ang, Written by Kevin Chu (建燁)
Original: http://home.macau.ctm.net/~sonpou/1212/Yip.htm
(Translator's note: Kevin Chu is a current-affair commentator from Macau.) 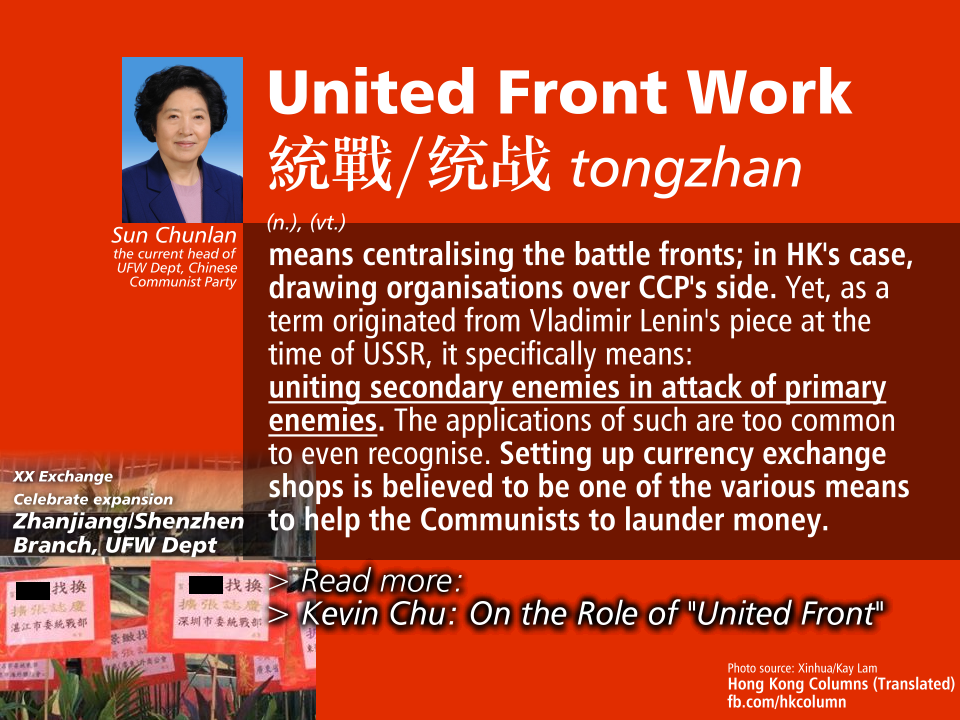 As "United Front", known as "Tongzhan" in Chinese, explicitly states, it means "centralising the battle fronts". This term is originated from Vladimir Lenin's piece at the time of Soviet Union and is regarded as one of the three weapons of Chinese Communist Party (CCP)'s revolution. Viewing "uniting secondary enemies in attack of primary enemies" as the principle in political competition, CCP thinks highly of "United Front" for both inner- and outer-party issues.

CCP stands out, unquestionably, when it comes to implementations of "United Front" tactic. Expelling Chinese Nationalist Party to Taiwan back in the days is remarkably listed as one of its "achievements". Indeed, CCP succeeds in political struggles one after another conjointly through "United Front". The revelation of broken promises comes along in the meanwhile.

Before the establishment of the People's Republic of China (PRC), Mao Zedong and Zhou Enlai, both significant leaders of CCP at the time, gave people their solemn pledge of the future of democracy through Jiefang Daily and Xinhua Daily. Yet, in the end, is there any Chinese on their motherland ever embracing the warmth of democracy? Have anyone ever witnessed one direct election of the President of the PRC? With an endless harassment of the unhealthy political system, how is it possible for a country to alter its economy and livelihood from the ground up?

CCP vowed likewise to bestow ethnic minorities the right to self-determination once, however, not long after the establishment of PRC, Mao Zedong, the founder and chairman, when reviewing the national historical records, indicated that it was a move of expediency gaining their support towards the regime and that there was no need emphasising the right to self-determination anymore.

Mao also claimed that it was not necessary to have expressions such as "the establishment of CCP's regime" and "the fall of the  Kuomintang of China" in order to avoid any deprivation derived from the secession (More on P. 4-5 from the Chronicle by Mao Zedong 1949-1976: Volume I compiled by the CCCPC Party Literature Research Office). To this day, as a matter of fact, self-determination among ethnic minorities still belongs to one of the basic national policies. They see the importance to prepare ethnic minorities of their ability towards self-administration, so as to diminish the inner conflicts once the integration gets in afterwards. And it doesn't stop right here.

Members of Parliament of the United Kingdom, as media from Hong Kong, recently said that Beijing's officers have transmitted a message disqualifying Sino-British Joint Declaration. In the matter of implementation time, the countries should discuss in peace. There will only be problems left if they do not settle with a mutually agree time for implementation.

The term "United Front" from Lenin, surprisingly filled with such stream of thought that is penetrated of Chinese-spy-style. In The Art of War, it reads, "To govern the army properly, it is noted that there is no one closer than spies, deserve receiving more advantages than spies, know more secrets than spies." Likewise, in Wubei Zhi, it reads, "Spying is inevitable when it comes to verse military forces. Harm so caused is unavoidable during the process."

For the term "United Front", the ultimate purpose "uniting secondary enemies" is to employ spies. All is as what Mao said before, "Who is our enemies? Who is our allies? These are the primary problems of revolution we have to solve" (Analysis of Classes in Chinese Society (1925), Mao Zedong). Generally, the symbolic meaning of the term is rather negative, given that its definition sometimes carries the behaviour of bribery. Yet, I stand on the ground that this "United Front" tactic is eventually no more than a tactic that its nature is directly proportional to the user.

To advance insight towards "United Front", along with its historical background, it is one way to achieve ideal liberal education. On the basis of the common use of "United Front" nowadays among CCP and some other related parties, one is able to not only gain knowledge about the past, but fathom today's China from the mist.
Posted by Azurino at 13:14