When surfing the net in the evening two days ago, I saw people discussing the latest government public advertisement, and I looked it up and watched it out of curiosity. The ten odd seconds long ad begins with footage of a recent mass demonstration, demonstrators charging at steel barriers and protesters staging an assembly. It concludes with a simple message in white on a black background with a voice-over: Your vote. Don’t cast it away.

I was infuriated. I had a lot of questions in my head: Is it appropriate to explain such a controversial issue within a mere ten-odd-second-long prime time TV ad?

The thing to do when one has a question, of course, is to ask the Mighty God of Google. Government ads in the past were generally about things like telling people not to go wave-watching during severe weather conditions, reminding employers that it is illegal to delay salary payments, promoting the Elderly Health Care Voucher and so on. Matters such as these—civic education, existing laws and implemented policies—are generally in black and white and hardly controversial. However, this “Your Vote” ad has really gone way overboard.

First, how the candidates are to be nominated is a question that the 2017 Chief Executive election must first resolve. When the public has an opinion on the matter or even oppose the government’s proposal, they took to the street to have their voice heard. It is clearly shown in the second footage in the ad that demonstrators held up a banner that read “Towards Universal Suffrage”. But the government’s antic now is to oversimplify “universal suffrage” as “everybody has a vote” without a single word on how the candidates are to be nominated.

Attempting to sway public opinion, the government has been painstakingly speaking ill of the people’s quest for democracy, touting the idea that “Occupy Central is illegal” and “the rule of law is not to be challenged”. But here they are now feigning innocence in this seemingly harmless clip, which is essentially saying, “We are giving you the vote to elect the CE in 2017, why are you still complaining? You troublemakers don’t want the vote, eh?”

Hey hold on, it is written in black and white in the Basic Law that Hong Kong citizens have the freedom of association, of assembly, of procession and of demonstration [1]! It is not illegal for anyone to participate in demonstration to express their demands! Despite the fact that people were demonstrating peacefully, demonstrators were featured in the ad as hooligans jeopardising Hong Kong’s journey towards universal suffrage. Now what is the government insinuating? When CY Leung could sign the anti-Occupy Central petition “in a personal capacity”[2], are citizens to be labelled as disrupting harmony and disturbing public order just because they exercised their legitimate rights? What is this but a double standard? Quod licet Iovi, non licet bovi—Gods may do what cattle may not!

Second, the ad stirs up even more strife among Hong Kong as a society. The clip not only deliberately neglects the real demands of the people, it also speak nothing of the government’s obstinate ignorance in the people’s demand, it turns right into wrong and implies that the demonstrators are the culprits of the chaos in our society today. It instills a despicable image of troublemakers that is anyone who fight for democracy: “Now you are given a vote, but you greedy barbarians will never be contented!” As a result, demonstrators are to shoulder all the blame, and be wrongly incriminated as sinners of history who ruined Hongkongers’ chance of having the vote in 2017.

The government is pointing its finger at these citizens who demand universal suffrage and saying to the so-called “silent majority” that, “These people are the ones who cause all the troubles and ruin your vote!”

The government ad intentionally misleads the “silent” citizens into thinking that the demonstrators would really rather “cast away their vote” to elect the CE. It is unbelievable that a government would use public money to make such an ad to create mutual hatred among citizens. If I hadn’t known the context I might have thought that we were back to when the “Anti-rightist Movement” was going on in China where anyone could be slammed in the face and labelled as “the enemy”.

I am beyond furious about this. It is unfairly advantageous for the government to use its public service ads to convey political messages during prime time. If you don’t like Emily Lau, you can choose to not vote for her, not donate to her (whether Jimmy Lai would concur is another matter). Even if she makes a dozen more political advertisements on Commercial Radio, at least you wouldn’t have helped her make those, so you could be less angry. But the “Your Vote” ad was made with taxpayers’ money—money that is coming out of your and my pockets! Because it was funded by tax dollars (even if it was outsourced), even if you may not have paid tax, your boss does. Hongkongers are forced to pay for this crappy clip, only to have it cast the blame on the citizens for the feud over universal suffrage. So we are practically paying to have our names bawled out. How would you feel? I would rather the government uses the money to make two more anti-drug advertisements!

Finally, I want to remind everyone that given the government’s tendency towards a “gradual process”, we can probably expect to see government ads like “CE leads Hong Kong into a new era of prosperity” and “Unlawful assemblies threaten rule of law. Don’t break the law”, and the pro-establishment camp would exploit the opportunity to excuse their self-promotion and opposition-slandering as “promoting policies”.

(Author’s remarks: I was surprised to see so many lightbox advertisements with this design in the MTR station today, maybe the government does not need to pay TV stations for TV advertisements, but surely it has to pay for these lightboxes!? Another chunk of Hongkongers’ hard-earned tax dollars wasted on these things! How the government’s promotion on this matter goes everywhere is most certainly unprecedented!) 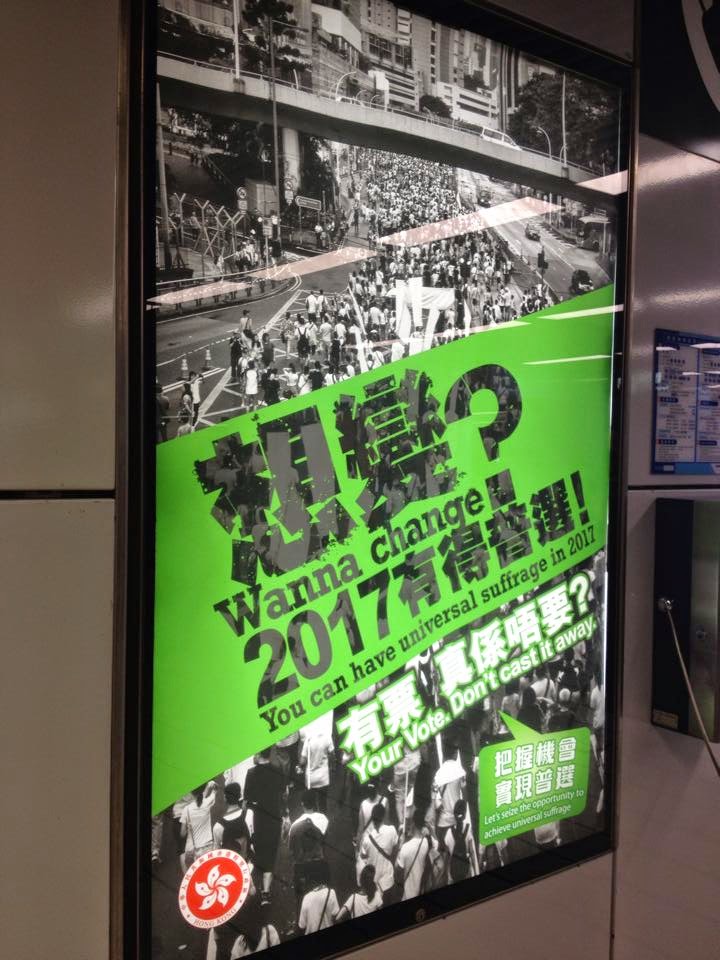 Note:
[1] Article 27 of the Basic Law: Hong Kong residents shall have freedom of speech, of the press and of publication; freedom of association, of assembly, of procession and of demonstration; and the right and freedom to form and join trade unions, and to strike