Atsuna: Why Is China Raising A Generation of Brats?

Why Is China Raising A Generation of Brats?
Translated by Vivian L., Written by 假啞港女 (Atsuna)
Original: http://www.passiontimes.hk/article/08-05-2014/18208

A few years back, an article published on NetEase (link in Chinese), a popular news forum in China, drew attention to China’s new generation of spoiled children. Accompanied by a series of photographs, the article shows a Chinese mother and her spoiled son making a scene in public. The son is pictured crying and making a fuss demanding his mother to buy a toy. When the mother refuses, the son slaps his mother in the face and pulls at her hair to force his mother to give in. Then, a passerby, enraged by the son’s behaviour, tries to put a stop to it, only to be chastised by an angry “Go away!” from the son. As if he hasn’t had enough, the son then seizes his mother’s neck and tried to choke her with his small hand. The mother finally gives in. 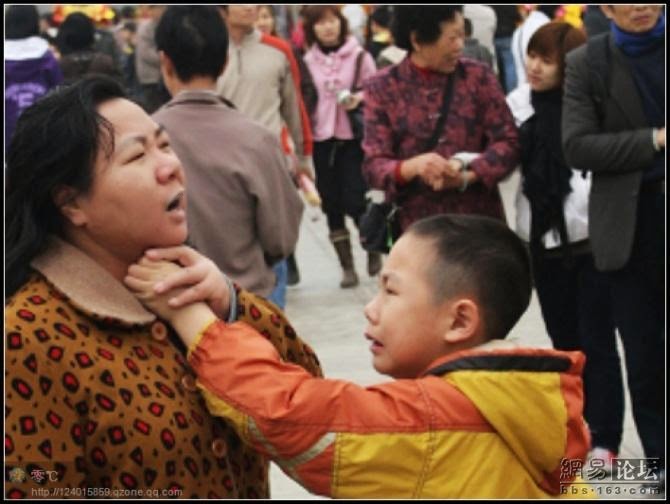 Whenever I see children among Chinese tourists in Hong Kong, I can’t help but notice that they give off a certain vibe that is markedly different from children from other regions—a vibe of incivility and hostility.

Some may point the finger at the Chinese government’s one-child policy that irrevocably created a whole generation of spoiled only-children.

But single-child families are not scarce to find in Hong Kong and Japan. Why should incivility be an exclusive phenomenon among the children of China?

Funny enough, though, as pampering parents as the Chinese are, they are often quick to blame their own children for the petty crimes they commit. When caught eating in the public transport, “The kid’s hungry,” they say; when caught letting their kids potty in public, “Children can’t hold it,” is their excuse; when caught stealing little rubber ducks from an advertising display, they pout, “The kids want them,” as if they as parents are the innocent party [note 1].

Misbehaving children are not to be corrected; they are more useful that way as the Chinese parents’ scapegoat.

Many Hong Kong parents religiously believe that kids should start learning foreign languages as early as infancy because you will never sound native-like if you start learning older. The same goes for good manners. People never learn it quite the same if they don’t learn it young.

We may learn a thing or two about parenting in Malcolm Gladwell’s The Tipping Point. In the 1980s, New York City’s crime rate was through the roof. To curtail the crime wave, the NYC mayor did not particularly focus on fighting violent crimes, instead, he put police efforts into cleaning up vandalising graffiti in police vehicles and combating minor crimes such as fare-beating on the New York subway. Eventually, the city saw a sharp decline in all kinds of crime. The story tells us that fighting crimes begins with the smallest of detail, in this case, altering the city into a context less conducive to crime.

The same applies to parenting. If a child is permitted to behave however atrociously as he she pleases—throwing excessive temper tantrums, littering, peeing and pooing in public and the likes—the child is bound to grow up into an obnoxious human being, or worse, someone who would choke his mother just to have a new toy.

The principle is easy enough to understand. But why are mainland Chinese parents so prone to spoiling their kids? Even the new wealthy Chinese families fail to raise good-mannered children.

Earlier this year, a British young woman tells of her experience of working as a nanny for an ‘obscenely rich’ Hangzhou family, whose only son was ‘more than a little spoiled’. He would spit on her, and pick his nose and use her clothes as wipes. The nanny noted that the family once invited Hong Kong singers to perform for the son’s birthday party and the child sang on stage as his prearranged fans cheered on. He signed autographs and took pictures with them after the performance. It’s no wonder the child went cheeky with his teacher, “You’d better treat me nicely. I am a celebrity now.”

The inflated ego of this wealthy kid and the self-gratifying behaviour of zillions Chinese people actually have more in common than one would expect. The difference being that children of the newly rich like to wield their ostentatious power over the less fortunate, whereas the average Chinese countrymen like to instill in their children their own twisted sense of “fairness”.

The small city of Zhongxiang in Hubei province has been infamous for its students’ collective practice of cheating during the national college entrance exams. A few years ago, the province’s education department decided to crackdown the ill practice with new policies to eradicate cheating. But the move angered thousands of parents and students alike. An angry mob of parents even beat up the teachers invigilating the exams. They protested in fury, “We want fairness. There is no fairness if we’re not allowed to cheat!”

If that loses you, hear the Chinese logic explained in this parent’s comment, “Those kids whose families have money and powerful guanxi can just buy their way through the exams. Average families like us spend a fortune to buy the answers for our sons and daughters, only to have our cheating devices taken away because we don’t have no guanxi!”

If there were two sets of logic known to men, there would be two sets of fairness, one of which is fairness as the world knows it, the other is “fairness with Chinese characteristics”.

China is not governed by rules that are set in stone, but rules that are very much implicit. As formidable as China is being the world's second largest economy, integrity is certainly not an ingredient of the country’s success.

The Basic Law promises that “Hong Kong people ruling Hong Kong” is to remain unchanged for 50 years. But the promise needs not wait so long to be shattered by Beijing’s white paper released in June and the threat it implies.

When a country has no integrity, as Confucius taught, proprieties and music will not flourish, punishments will not be properly awarded, and the people will not know how to move hand or foot. [note 2]

That is why Chinese people learned to become aggressive from a young age—because bullies don't get bullied, so long as you don't mess with a bigger bully.

Note:
[1] A pear-shaped advertising display made with 15,000 rubber ducks was on display in Shanghai for three days before the bath toys was practically stripped clean by visitors. (http://online.thatsmags.com/post/rubber-ducks-theft)

Email ThisBlogThis!Share to TwitterShare to FacebookShare to Pinterest
Labels: Issues in mainland China