Duen: Pan-dems to Hit The Reform Stage with Another Clownery

Pan-dems to Hit The Reform Stage with Another Clownery
Translated by Vivian L., Written by 段天狼 (Duen Tin-long)
Original: http://localpresshk.com/2014/08/sucks-again/ 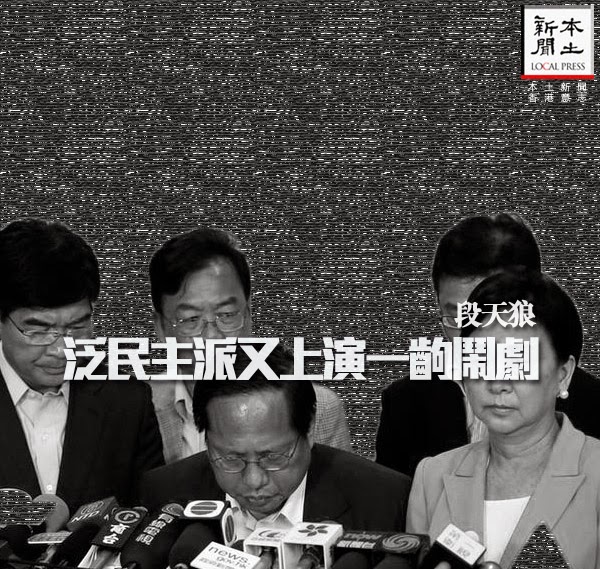 Hong Kong deputy to China’s People Congress Cheng Yiu-tong remarked recently that Beijing expect universal suffrage in Hong Kong to be “risk-free”, and that chief executive contenders must have the support of at least half of the nominating committee to be eligible for the election.

Let us not forget the pan-democrats' already made a trip to Shanghai in April to initiate negotiation. Is Beijing likely to sway just because of an extra meeting? Apparently not. So what more do they hope to achieve by another meeting with the liaison office?

Are we to expect the same script as the last electoral reform four years ago?


Responding to the invitation to meet with Zhang, the pan-dems insisted that the purpose of the meeting is to channel Hongkongers' demand for universal suffrage, and to call into question the reliability of the public consultation conducted by the SAR government. They argued that the voice of near 800,000 people who voted in the unofficial referendum—in which Alliance for True Democracy's "three-track" proposal was chosen as the way to elect the Chief Executive in 2017—is not to be dismissed. They hope to reiterate to Zhang that Hongkongers will not be contented with a reform package may not be perfect.

The pan-dems have obviously made such a statement on assumption that Beijing cannot quite conceive the actual situation in Hong Kong. But is it so?

Allow me to remind our readers that speaking of the Occupy Central’s unofficial referendum, both the liaison office and the HK and Macau Affairs Office were crystal clear about the vote being non-binding, essentially dismissing the public opinion it carries. It’s safe to say Beijing has had knowledge of Hong Kong people's demands, but has ignored it all the same.

To have thought an unrecognised vote of 800,000 can be used as a bargaining chip on the negotiation table with China, the pan-dems have to be buffoons to make such a mistake. If the outcome of an unofficial referendum had any effect, at least Chief Secretary Carrie Lam would not have produced an outright biased report on the reform consultation. And if the pan-dems cannot even win over the head of the reform committee of our own government, what have they to affect the Chinese government? If the pan-dems are meeting with Zhang on the full knowledge of said meeting having no consequence, one is compelled to believe they might have a hidden agenda—perhaps one that follows the same script as last time.

The liaison office chief will meet with pan-dems in four separate sessions. The lawmakers said such an arrangement is to ensure different parties have sufficient time to communicate their ideas. If all pan-dems, regardless of party affiliation, are strictly to channel Hongkongers' straightforward demand for universal suffrage to Beijing, why would there be need to do so in a separate fashion? Is such an arrangement made to ensure different "opinions" get across? We will only have an answer to these doubts as the constitutional reform progressed in the days to come. But we can definitely see how far the pan-dems' bottom line on the electoral reform have receded.

Popular nomination: out of sight, out of mind?


On fighting for a truly democratic election of the city's leader, the pan-democrats have gone by the slogan "Genuine universal suffrage. No screening", insisting on popular nomination as an indispensable component of universal suffrage. But when news came out that Beijing now requires that CE hopefuls must garner at least half of the nominating committee to officially become candidates, the pan-dems are concerned only with tweaking the threshold of the nomination procedure—to suit their needs, presumably. Popular nomination is completely thrown out of their minds. If the pan-dems really take a firm stand in demanding a genuine universal suffrage without screening, they would never stray from the principles of democracy and compromise no matter how unreasonable the official proposal is.

Popular nomination is a concept central to universal suffrage. The fact that the pan-dems have made a concession in giving the people their nomination rights only reveals how they are concerned not with whether there is unreasonable screening, but with the chance of them getting past said screening.

At the end of the day, the so-called fight for democracy and all the glory it brings lies only in politicians’ slogans, which unfortunately are enough to win them heaps of loyal support.

Once again, the pan-dems will negotiate with China’s rep while Hong Kong’s constitutional future hangs in the balance. But all signs point to a futile meeting that will likely not result in any change in the electoral reform. At this rate, Hong Kong is bound for the same mistake and the same disastrous route as the last reform.

What’s unfortunate is that the pan-dems this time has the mandate from 800,000 Hongkongers at their backs. It’s easy to assume the obvious. Hongkongers are easy to assume anyone who is categorised under the democratic camp would do with all his might to help them fight for democracy. Just as the three-track proposal has “popular nomination” as one of its tracks, so everyone who is pro-democracy should root for it. The pan-dems are no heroes of tragedy, only clowns.