Sze Lai-shan: "What Contributions Have You Hongkongers Made?"

Sze Lai-shan: "What Contributions Have You Hongkongers Made?"
Translated by Choi Siu-wa, Written by Editorial Team of Passion Times
Original: http://www.passiontimes.hk/article/07-05-2014/17539 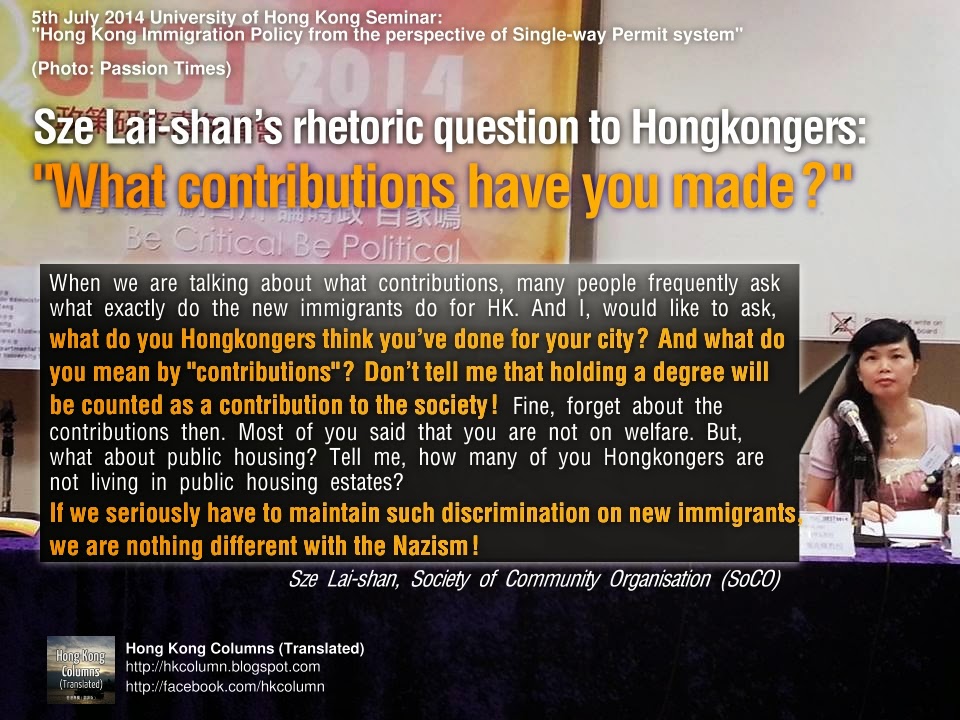 Today, the Hong Kong Politikos Quest Championship held the “Looking at Hong Kong’s Immigration Policies from the One-way Permit Scheme” forum in the University of Hong Kong (HKU). Raymond Wong Yuk-man, a member of the Legislative Council; Roy Tam, the convenor of the Population Policy Concern Group; Sze Lai-shan, a committee member of Society for Community Organisation (SoCO), and Paul Yip, a professor of Social Work and Social Administration of HKU attended the forum as guest speakers. Ms Sze, who took part in helping new immigrants to reverse the judgment of seven-year residency requirement for Comprehensive Social Security Assistance (CSSA) benefits, made an astonishing comment in the forum that asking Hongkongers to reflect on what contributions they have made to the society before blaming new immigrants.

Sze restated SoCO’s standpoint in the forum: fighting for the revocation of all the residency requirement for CSSA benefits and requesting the government to legislate against new immigrants discrimination. Besides, Sze responded to a member of the public that new immigrants filled most of the junior vacancies in Hong Kong when the person questioned whether new immigrants of family reunification made any contributions to the society’s economy. She claimed that most of the new immigrants are self-reliant, and SoCO has been helping them integrate into the society of Hong Kong. She further added that Hongkongers should ask themselves that what contributions they have made to the society instead, and should not always aim their spears at new immigrants. “Many people frequently question what exactly do the new immigrants do for Hong Kong. And I, would like to ask what do you Hongkongers think you’ve done for your city? And what do you mean by “contributions”? Don’t tell me that holding a degree will be counted as a contribution to the society! Fine, forget about the contributions then. Most of you said that you are not on welfare. But, what about public housing? Tell me, how many of you Hongkongers are not living in public housing estates?" she said. Her speech caused a commotion among the audience.

Mr Tam rebutted Sze’s opinion later, pointing out that many countries have financial means test for new immigrants of family reunification, and only those who are able to be self-reliant are permitted to immigrate. But it does not mean only the rich are qualified to immigrate.