Do Chan: Paul Kwong - a Living Example of a False Prophet 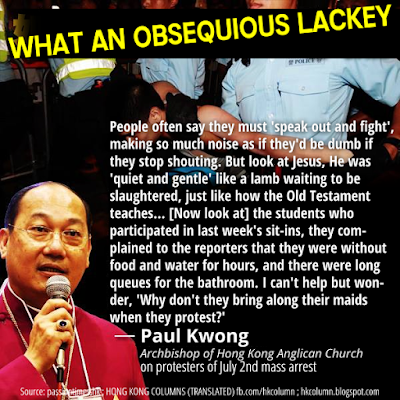 In honour of the tradition where the bishop blesses the baptised to follow the example of Jesus Christ in the Confirmation celebration, Kwong mentioned more than once that Christians should always ask themselves, "What Would Jesus Do?" (WWJD). But on what Jesus would do in the face of Hong Kong's current political climate, he took a firm stand, "I do not believe Jesus would have thrown objects in LegCo, nor would He have berated the government officials, nor would He have used irrational and violent means to express Himself."

Kwong continued to claim that the Jesus depicted in the Gospels was very "consistent": Jesus was "gentle and humbled" when He was condemned before Pilate, silent like a lamb waiting to be slaughtered. Those who came out to protest had "no peace within, nor do they have the wisdom to think straight," Kwong argued, "that's why you see so much irrational responses, some are even worried that they will no longer be allowed to protest next year." The greatest bullsh*t of all was when he taunted those arrested after July 1 overnight sit-in to "bring along their maids". The way I would like to respond to his sermon is that the Archbishop just demonstrated how to be a false prophet.

False prophets preach "the other gospels"

Kwong said Christians should always ask themselves what Jesus would do, but he himself has little knowledge of the Jesus as the Bible records. "Jesus Cleanses of the Temple" is a story well-known even to non-believers. And what He did was in no way close to being "gentle"; Has Jesus ever berated anyone? The Bible has records of Jesus looking at those who were spying on Him in anger, Jesus rebuking His disciples, and Jesus publicly berating the Pharisees and Sadducees as "brood of vipers". Jesus would be the last person to be gentle when injustice is before Him. Kwong's depiction of Jesus as a man of little words is a shameless distortion of the Lord's image into one that fits his own pro-government leaning. Such a person is no man of God. Kwong must confess his sins and repent, otherwise may he never ascend into Heaven no matter how tall his bishop's mitre is.

"Therefore this is what the Sovereign LORD says: ... My hand will be against the prophets who see false visions and utter lying divinations. ... Because they lead my people astray, saying, 'Peace,' when there is no peace, ... The wall is gone and so are those who whitewashed it, those prophets of Israel who prophesied to Jerusalem and saw visions of peace for her when there was no peace,  declares the Sovereign LORD."

The scripture passage mentions those false prophets who misled others by saying, "Peace," when there was no peace. Kwong's sermon was a perfect example of false prophecy. He spoke of how Hong Kong is beset by a host of problems, but what he did was teach his parishioners to have peace, and slander the protesters as having no peace within. This is not and never will be the teaching of the Holy Scripture. The Bible does not instruct people to be ostriches that profess "spiritual victories" but are ignorant of the dangers of the outside world. The Bible has always been a book of truth. The role of a prophet is to warn people of the consequences of sins, and that people should turn away from their sins and do what pleases God. Calling upon Christians to be "gentle and humble" when facing serious issues is essentially telling Christians to keep their mouths shut and stay away from politics and from the truth. But with China trampling on all aspects of the city's life, it's only natural for Hongkongers to cry for help, and to fight back in self defence. But Kwong, on the other hand, brush people off and says, "Suck it up, it'll all end soon." A pastor like this, even one is too many for our own good.

Towards the end of his sermon, Kwong reverberated, "We as Christians should follow the example of Christ, so that people see that we are different," stressing that Christians should remain silent like the meek and gentle Jesus he had depicted.

I agree in all certainty that Christians should follow Christ's example to become like Jesus, so that people see that we are different, which is just the reason why we should follow His steps to stand up against injustice and sacrifice for the greater good.

[Translator note: Paul Kwong was appointed as a member of the Chinese People's Political Consultative Conference, China's political advisory body, in 2013.]
Posted by Unknown at 22:04