Bok Kit: Where the hell are you from, York Chow? 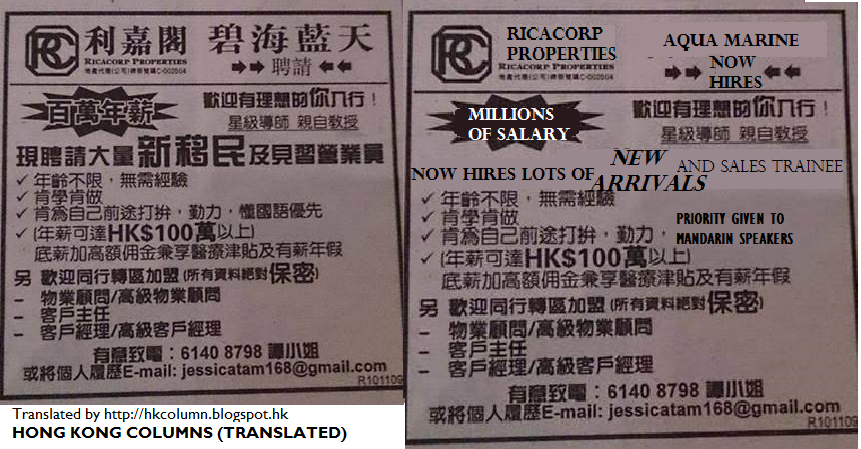 The saying "ridiculousness can only be more but will never satisfy itself," cannot be more suitable as the description of today's Hong Kong.
Shortly after the sneering wave of "Can't forget you" (忘不了你) [Translator's note: a performance carried out on the alumni association annual dinner of Queen's College in 2013], York Chow Yat-ngok, the chairman of the Equal Opportunities Commission (EOC) again has won the crown of laughing stock. He, as the representative of EOC, announced that EOC will start examining the accessibility of the 4 Ordinances, and may mark amendments of the Race Discrimination Ordinance (RDO) in the third quarter of this year including even clarifications of terms like "the origin of the person" and the "identity for entry" so as to "avoid mainland Chinese from suffering discriminations in Hong Kong". By setting up "the minimum standard", they aim to put an end to all possible nonsense actions which might be found on Hong Kong people, to educate the community and to enhance the sense of citizenship.
Let's put it aside the practical "whats" and "hows" of "nonsense actions" and "the minimum standard" coming out of York Chow's mouth as Its creation and fantasy are enough to blow you off. Come on! How come mentioning one's mainland provenance and status would make a preposition of crime?

Discrimination can be very subjective indeed. How somebody say or look at people can arouse lots of speculation and imagination. If I ask a mainlander where are they from, does it constitute discrimination? What about asking an applicant's background information during job interview? Even when triad gang members bluff others, they will say "Where the hell are you from?" [Translator's note: 邊撚度架你 can also means which triad branch do you belong to?], and this can also be discrimination against mainlanders. Some lawyers/barristers said it would be very unfair if Hongkongers having no freedom to tell them off as "locusts" in the condition that they grab milk formula, push up the property price and take over HKers' resources. With such "foresight", Hongkongers may get into literary inquisition (文字獄), and mainlanders will be on the altar: one cannot be rude to them nor scold them, as if they are sacred and inviolable like gangs or leftist-morons.

While I was still upset this morning, I received a hiring ad picture from my friend through Whatsapp. It explicitly says they "hire new arrivals" and "priority will be given to Mandarin speakers"! I was more than angry! Why emphasise on hiring new arrivals? Can't Hongkongers take this job? Are Hongkongers unable to speak Mandarin, and now we have to hire mainlanders? Isn't this genuine discrimination against Hongkongers? York Chow! Hongkongers are being discriminated on their own land now! Won't you be angry or ashamed as the chairperson of EOC?

All aspects in Hong Kong are encircled by invasion from China. You, as a former politically appointed officials, and a chairperson of an advisory body, do not defend the rights and dignity of Hongkongers, but rather protect those people from the external, and even want to set a Draconian law to deprive of the channel for Hongkongers to express their anger? What intention do you jerk bear? ARE YOU NOT A HONGKONGER?

Try the hooligans' catchphrase: "York Chow? Where the hell are you from?"
Lord Patten (肥彭), last governor of Hong Kong, has put it in this better way, "My anxiety is this: not that this community's autonomy would be usurped by Peking, but that it could be given away bit by bit by some people in Hong Kong." Hong Kong nowadays has got a bunch of bastards having their roots in Hong Kong while never act like one of us, living here with full of ingratitude to our city's nurturing, surrendering to the enemy for wealth. Those behaviors suit ever the name of "Traitors of Hong Kong".

Of course, as widely expected, the leftist-morons, some shortcoming shields, will not let us "off the hook" and will burst out blaming shit like "The discriminations over mainlanders do exist" or "it is urgent to maintain a tolerate and equal social atmosphere".

My friend has said and here I quote, "Hongkongers has never placed discriminations on mainland Chinese. We just simply look down on anyone without inner quality. If you think some other people treat mainlanders in an unfair way, that just indicates YOU, with the agreement that those mainlanders do have some unbearable behaviours, NOT US!"
Posted by Unknown at 12:23