Atsuna: Knowing Our Priority Is Necessary

Knowing Our Priority Is Necessary
Translated by Chen-t'ang 鎮棠, edited by Kristee Q, written by Atsuna
Original: http://www.passiontimes.hk/article/05-17-2015/23019
China has been described after 1949 as: "Relaxed control results in chaos, chaotic society causes stringent control, stringent control results in bitterness [or death], and once bitterness is realised, control is released." (一放就亂，一亂就收，一收就死，一死就放。) On the 1st July 2003, 500,000 protesters took to the streets against the legislation of Article 23, and Tung Chee-hwa, the first Chief Executive stepped down. What Hongkongers deemed as victory was seen as chaos - the result of "relaxed control", was "stringent control" being imposed which paved the way for "economic colonisation" by the Individual Visit Scheme (2003); playing China's National Anthem before Chinese News Reports (2004) and removing the Central Star Ferry Pier and Queen's Pier (2006) were ways to remove the collective memory of Hongkongers, so as to further China's cultural aggression. After Donald Tsang, CY Leung was appointed -- a metamorphosis from "AO ruling HK" to "Party member ruling HK". Donald is but a classic toady who very cautiously nurtured his self-interest; CY is a more daring person who confront Hongkongers by squeezing Hongkongers' necks. He waits to see whether Hongkongers are strong enough to withstand such "bitterness".

People can be reckless when they are forced into corners and the Umbrella Revolution is almost the last attempt of Hongkongers to display their beliefs. Yet "Kongformists" will support slogans like "being rational and tolerant" in these moments. Charging is too radical, breaking glass is too radical, so they mentally masturbate themselves by the number of protesters and the peace and order during and after the protest (like not burning vehicles and picking up rubbish). I am not saying that being tolerant, rational or picking rubbish is bad, but Hongkongers perhaps do not know the priority of action against tyranny.

Tong Tekong, a renowned Chinese scholar in the US, says there are different "main and sub-themes" in different eras of China's modernisation. The main theme is the "most urgent issue" of the era, and the sub-theme is the "less pressing issue". Sometimes the methods of accomplishing the main and sub-theme might contradict each other. So, those who wholeheartedly want to accomplish the main theme might add burden to the solution of sub-theme; but those who forget the main theme and focus on the sub-theme will certainly be spurned. 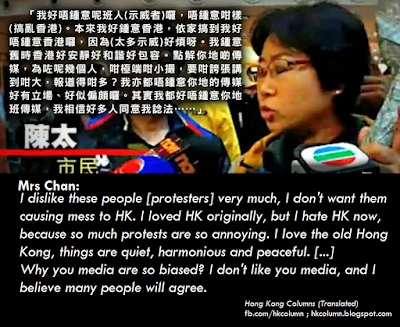 This is what Mrs Chan thought. When Hong Kong is at the brink of its death, these "Kongformists" are still obsessed with rationality and tolerance - sub-themes that contradict with the main theme.

Hongkongers have lost the best moment for negotiation with China after decades. China does not allow the autonomy of Hong Kong, yet they put "High degree of autonomy" in the Sino-British Joint Declaration (High degree of autonomy DOES NOT EQUAL  AUTONOMY). Although holding the upper hand, China did not rise up, and knowing that Hong Kong would fall into its hands sooner or later, so it pretended to be kind and gentle. Even Mao Zedong promised "As long as the people have oversight of the government, then government will not slacken in its efforts. (July 1945)" Turning their back on the people and failing their promises are good reasons why the Communist Party will succeed. In only 18 years, Hong Kong has "deserved" a lot. It is possible that in a few years to come, given the present dissent the Red Army may come out and suppress protests in Central.

When the last emperor of Ming dynasty, Chongzhen, died, the funeral lament cried, "Keeping cowardly ministers in court, and timid generals in fields of battle, and now nothing has left in our dynasty but our cries and laments." I am immediately reminded of the inabilities of the cowardly HKSARG officials and the pan-dems, and the "caring mothers"  (police) mishandling my tax money. I wonder when we "have nothing left", will my friends or relatives cry to Victoria Harbour, which has long been polluted by Dongjiang water? After the cries and laments,  are Hongkongers ready for any sacrifices?

After all, Mao has said,

"A revolution is not a dinner party, or writing an essay, or painting a picture, or doing embroidery; it cannot be so refined, so leisurely and gentle, so temperate, kind, courteous, restrained and magnanimous. A revolution is an insurrection, an act of violence by which one class overthrows another."