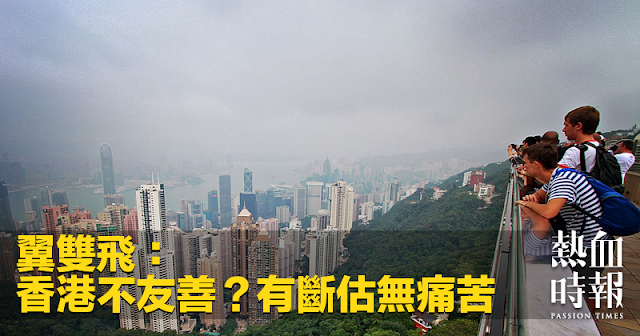 The Oriental Daily recently published an article, titled "The Unfriendliest Cities in the World. Hong Kong ranks the 4th", saying that "although the survey conducted by Yahoo Travel did not explain the reason why, it did mention the 'unfriendly people' are mostly youngsters. It could be that reasons may relate to the recent anti-smugglers movement against mainland Chinese tourists."

Right. There are always people who assume young adults are useless, who choose to choose to shift the blame to others despite the fact that business operations are after all the business owner's responsibility, or those people who oppose the anti-smugglers movement -- these people will be more than willing to falsify the news. It is to be expected that they comment, "The image of Hong Kong is now tarnished by these 'useless young'! See! Surveys abroad prove it too! It is exactly what I've been saying..." On the Facebook pages of those pro-government/establishment figures (Translator's note: they are usually written in Chinese rather than English), you will find tonnes of these anti-"youngsters" quotes.

To be fair enough, do not judge a book by its cover and in this case do not judge a news report by its title, or else you will be hoodwinked. Please do take a look of the original survey "The Unfriendliest City in the World is..." and its content -- "The survey group consisted of 2,005 men and women, all from the United States."

Translation. The title "in the World" is obviously misleading -- unless the world consists of the opinions of 2,005 Americans. If you ask 2,000 or so Hongkongers what country's cuisines they love most and publish an article named "The Most Popular Cuisines in the World", does it reflect the truth? Changing the former one into "The Unfriendliest Cities in the eyes of US people" and the latter one into "The Most Popular Cuisines in Hong Kong" is surely closer to what the facts represent. After this clarification of the 'surveys' is there a sense that supposed-to-be factual news report from Oriental Daily is manufactured bullshit tailored for their reader's demographic?

In the comment section of the article, there are many doubts, like "What background do these 2,000 people have? A survey as such can only be worth referencing if the participants have travelled to few countries so that they can draw any conclusions. If a participant has only been to Hong Kong, then honestly does this disqualify the participant from deciding which one is "The Unfriendliest City in the World".

Another travel site Conde Nest Traveler announces "Readers' Choice Awards" on a annually basis. In Readers' Choice Awards 2014, there were approximately 77,000 readers participating in the survey, outnumbering Yahoo's survey. The site ranks Johannesburg, South Africa as the unfriendliest city, while Beijing ranks 6th, whereas Hong Kong isn't on the list. It also lists out all the factors of "unfriendliness", such as location and size of the city, political views, language barriers and so on, but not necessarily people's attitudes. Yes, Yahoo Travel doesn't necessarily have to mention the method it used to conduct the survey. Be it transparent or not, the writer of the news article quoting the survey is definitely not being objective for he/she attempted to put words into those 2,005 participants’ mouths.

The "The Unfriendliest City in the World is..." article from Yahoo Travel is nonsense. After considering the evidence this is certain. Yet the Oriental Daily, regardless of the paper's political bent, supports its allegation about the anti-smugglers movement by using that survey so  people can say, "You see! These useless youths are but tarnishing HK's image!" But when asked for details and for evidence no response has been forthcoming.

I continued in reading the Yahoo Travel article, it says,

"And more millennials considered Hong Kong, China, and Sydney, Australia, to be rude compared with respondents 35 and older."

Some misinterpret this as saying that youngsters in Hong Kong are less friendly than those aged 35 or above. I'm not saying that you shouldn't read newspapers at all, but to be critical -- when you see "it is speculated that", "it is said that", "some say", or any similar sort of such, pay attention and consider whether it's reasonable or not.Surely these news items are not in fact news but merely opinion pieces.In today's Hong Kong, most of the officials, politicians, and media do not bother to do a great job, let alone uphold the spirit that the job implies. It's up to you at the end of the day whether you are manipulated or not.
Posted by Azurino at 15:53