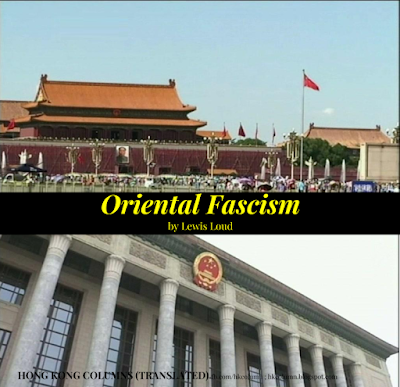 China is a fascist country. Modern China abides by the belief in “Ein Volk, ein Reich, ein  Führer”. Modern China is an empire masquerading as a nation state.

For an ethnicity to have more than one country, like Austria and Germany, is a universal standard. Yet Chinese do not abide by this. They believe Hongkongers are Chinese, thus bound by the belief “blood is thicker than water”, therefore Hong Kong must accept Chinese rule. To mention independence is certainly treacherous, but even autonomy and localism are identified with separatist and treasonous intent.

These beliefs are full of the elements of fascism. Westerners turn pale at the mere mention of fascism but America, ignorant and tolerant of the Communist East, supported China in opposing the Soviet Union. Hence, the largest fascist country is thriving today. Churchill once said that communism and fascism are twins that share the DNA of totalitarianism.

90% of Hong Kong’s population are descendants of Chinese immigrants experiencing the rule from proper China since the Qin dynasty. They belong to the same ethnicity. But many entities may grow out of one ethnicity. Germanic peoples founded more than one country. The British founded America later. Once separated there was never any talk of reuniting with mother Britain.

China’s opposition to any secession through evocation of nationalist sentiments is merely hyperbole. In reality, the Chinese Communist Party cares not a wit about territorial integrity. Russia has swallowed vast chunks of Chinese territories since the Qing dynasty but Jiang Zemin signed a treaty demarcating present borders, forsaking the recovery of those lost territories. So why are the Chinese who live on these forsaken territories not traitors?

Ethnic Perceptions with Chinese Characteristics
If China really cared about ethnicity, each province would be autonomous and establish their nationhood, then confederate to discuss matters that affected the entire region like Australia or Germany. Each province would be able to choose its own method of governance or development in accordance with the national condition yet the ethnicity would still belong to one entity. Yet China describes itself as a multiethnic yet united country. It is united so as to protect the party’s ability to monopolise all the power and profit; it is multiethnic to rationalise China’s invasive expansionism, its plundering of others’ lands.

An ethnicity can only have one country. A country can only have one leader. Such beliefs if used in the West would be identified as hegemony, fascism and racism. Yet to the pompous westerner, eastern fascism is culturally specific to cultural complexities thus should be tolerated. This is tantamount to Westerners demanding gender equality and feminism yet tolerating the deprivation of female rights in Islam due to different values.

Pretentiously cosmopolitan Hongkongers have very vague understanding of ethnicity. The Chinese nation (zhonghua minzu) is an artifice created by intellectuals at the end of the Qing and the beginning of the Republic era with only a century of history yet a majority of Hongkongers embrace it wholeheartedly as an earth-shattering revelation. Community eminences like Joseph Sung, Vice-Chancellor of the Chinese University of Hong Kong is an example. Yet Hong Kong with its modern meaning is already 176 years old, meaning the Hong Kong ethnicity is older than the Chinese nation by sixty or seventy years yet described as a fantasy.

If the Hongkonger as a nation is a joke, where are the unshakeable foundations for the Chinese nation? Undoubtedly it is the mischief of power; the powers that be may have the power to define. The relationship between the signifier and the signified are unstable, artificial or arbitrary, yet, humans are the author of everything. All is silent, only power may speak.

Hong Kong is not a nation because she says she is not. Once she decides she is, she is.
Posted by Azurino at 15:20