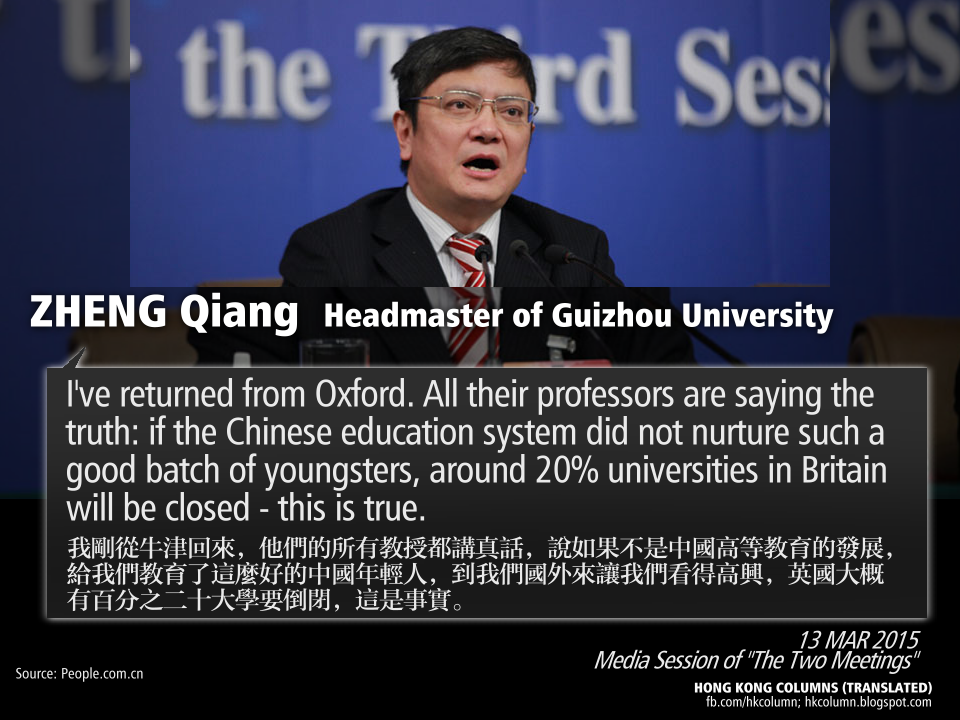 Zheng Qiang was raving a few days ago at a press conference of the Chinese NPC about "the overseas Chinese students saving universities in Britain":

I've returned from Oxford. All their professors are saying the truth: if the Chinese education system did not nurture such a good batch of youngsters, around 20% universities in Britain would be closed - this is true.

So a headmaster from one of the poorest provinces can finally hold his head up high to the "empire on which the sun never sets"!

A Qing dynasty official, Lin Zexu once claimed that "gweilos" from England were but vampires who did not know how to bend their knees. When the arrived, they could be easily attacked. Headmaster Zheng was similarly bursting with pride – so what’s the big deal, Oxford and Cambridge? "If we did not provide flocks of overseas students, your skeleton in the closet – the dilapidated, once-great empire that you have become – will be shown for all to see!"

Post by Hong Kong Columns - Translated.
Somebody doctored a photo of the "Two Meetings" - replacing the banner with "Parents' Meetings of Chinese Students Studying in the West". Quite accurate. Are there any official's children not studying in "evil capitalistic" countries with "ulterior motives"? Whether the offspring of Zheng studies in Guizhou University or abroad is worth our doxing?

[Translator's note: Tsinghua University was "first a preparatory school for students later sent by the government to study in the United States" - Wikipedia]
Top-notch institutions in China, such as Peking University or Tsinghua University, have become the "preparatory schools" for students before they go on to study in the US or Europe. The younger generation of China has never ceased to study, work and live in the West, and contribute to the growth of the West. This is a sign of failure for China’s entire higher education and social system. It is not something headmasters should feel proud of, rather, they should feel ashamed.


Post by Hong Kong Columns - Translated.
Zheng's logic is that of the almsgiver who hands out gifts with condescension.  This attitude is prevalent among Chinese elites and spreading like a cancer. They grab milk formula, daily necessities and luxuries in Hong Kong, arguing: "We are here to spend and give you job opportunities, how dare you not welcome us? Even if we urinate, defecate, jump red lights, and shout whenever we want, you should tolerate us." Chinese elites think Hongkongers would only live on air were it not for the Individual Visit Scheme. Yet "living on air" will not be as a "death" sentence – unlike that facing those kids whose parents are unable to buy quality milk formula so have to drink tainted formula, which makes them become big-headed babies. Does the Chinese dream of Xi Jinping include big-headed babies?

Chinese elites also go to Taiwan to buy fruits and seafood. All purchases have a political undertone. They think when they buy Taiwanese products, Taiwanese people should be grateful, or wish for "reunification" immediately. Yet the Sunflower Movement has shown the will of the younger generation, leaving Chinese leaders to reveal their true colours: "If we don't buy your fruits and seafood, you will suffer!"

China is not the almsgiver of the world, and the world is not the prostitute of China. So you are rich, huh? Buy more paper offerings, and create more smog then! 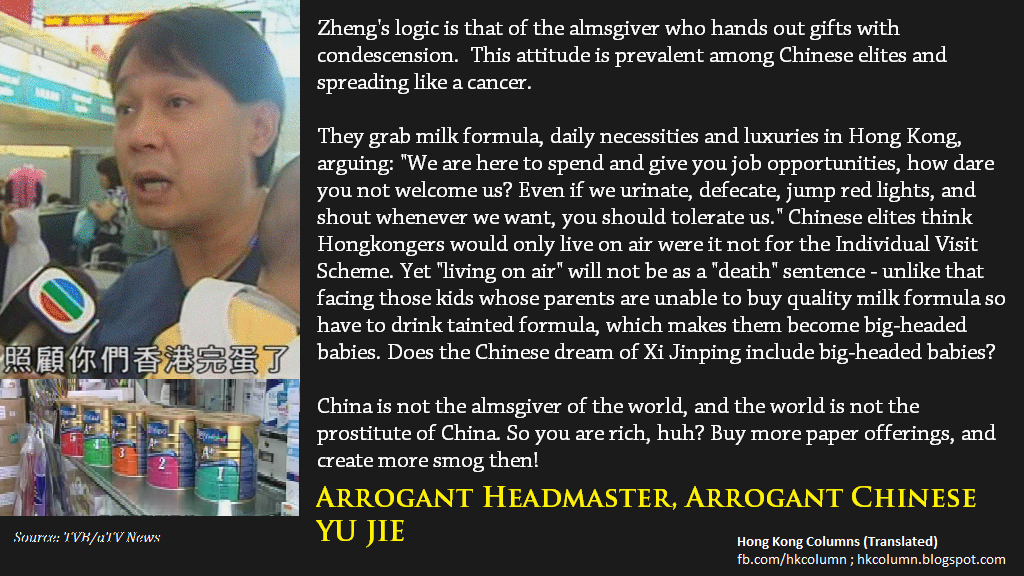