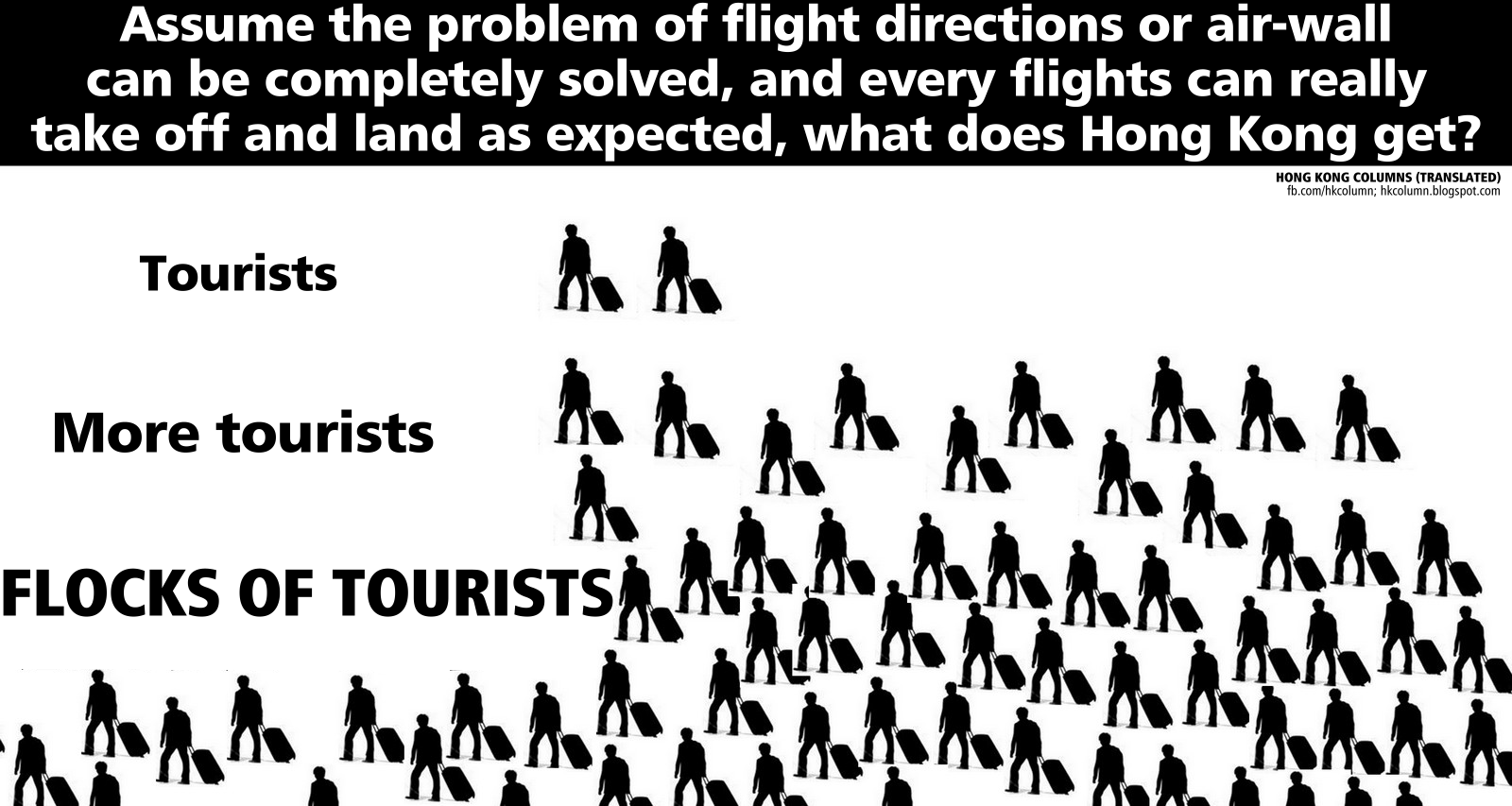 "Higher demand for Hong Kong internal resoureces will be generated if it is able to attract more users. Given the lack of talent and land, the government should import talent and turn to land reclamation."

It happens. One solution for all. So as they think.

The 3rd runway — to build or not to build?
Thanks to the economics training back in the day, I do learn some ways of thinking from Steven N.S. Cheung. To answer this question, let me raise a simple one first.

I couldn't help myself LOL while typing the above lines.

Is Hong Kong lacking tourists? Do we have any more capacity left for accommodating tourists?

The problem of Hong Kong does not lie on the demand side, but it's the domestic supply that hits a bottleneck, which has been revealed through several representative signs—

1. The unemployment rate of Hong Kong is 3.3%, almost attaining full employment. Such rate has reached the rock bottom since 1997. Vacancies of jobs in the market are desperate to be filled, especially in industries related to tourism, like catering and hotels. The situation applies also in fields such as engineering and construction. A little experience will do for job changing. If you don't buy that it's not easy to hire people, bring a friend who speaks Chinese and pay a visit to some Cha Chaan Teng to see how long the dish-washing workers and waiters have worked in there. 10 years later, it will be time for the post-WW2-baby-boomer-generation to retire. The labour force then will be expected to drop. By the time, supply will overtake demand, in a more aggressive manner;

2. Rent of shops and industrial buildings has skyrocketed. What reflects the true demand of end users (merely counting the rent might include speculation) is the vacancy rate and rent.  Do trust yourself over me. Pick a district where you are familiar with, and think, how many shops has survived since 2005. The barber's I-have-been has a no-future story. The owner, also a barber started first his practice as a disciple in a ground floor barber's in Cameron Road, and became a boss of an upstair barber's in Prat Avenue. The rent surged. He had no choice but to move to another upstair store in Hankow Road and to share the rent with other tenants. And now in return for a place for hairdressing business, he has to share the money with others. The places he used to rent has become restaurants and upstair stores;

3. Infrastructures have reached its limits. The MTR is so damn cramped; everywhere is filled with tourists even at 10 or 11pm; restaurants in tourists areas reject non-diners to use their washrooms; all scenic spots are but people — those from mainland China. Even I have a huge favour over Donald Duck, I only went to Disneyland HK for three times — free ones. Besides ugly Donald Duck souvenirs, another reason I am not willing to pay for it is fairly simple. If I were to give away few hundred dollars for special experiences such as cramping and shoving with Chinese people and having my queue cut by these barbarians, I would be nuts.

We need more tourists? No, you don't seem to find a single empty shop in the street or empty cable car in Ocean Park. And no, it's not like there is any problem of our airport's capacity or that it takes a cannot-bear long time to get on flight. C'mon! Airport expanded, then what? Will the tourists enjoy their time in such a crowded place? Cramping on an MTR train with flocks of passengers? Or return immediately after shopping in the brand name shops in the airport closed area?

Whether the High Speed Rail or 3rd runway "succeed" or not, once it's passed, we're doomed—

"Higher demand for Hong Kong internal resoureces will be generated if it is able to attract more users. Given the lack of talent and land, the government should import talent and turn to land reclamation." Some naively believe the suggestion of property development in country parks are means testing the water. What? Are you sober? Now we are talking about 141.5 billion HKD for the 3rd runway, and they just passed it in ExCo, why would they still be scared of building something else in countryside?

Be rest assured, they won't succeed for this one (the 3rd runway does have better chances to be successful, compared with the high-speed rail, like around 40% vs 0.0001% and tell you what, I am very serious about the percentage). But you see, watching it fall would not be a pleasant scene after all.

Prepare for the worst — no one uses the 3rd runway, and in this case losses are expected. In order to cover the costs, or at least suffer less, Hong Kong might have to sacrifice some of its aerospace, or allow China to have "co-location arrangement" in Hong Kong regarding the high speed rail [Translator's note: by "co-location", China might exercise its control in Hong Kong]. If it fails, the bad side will only go further — they gain more excuses to import "talents" or implement land reclamation with the idiotic hope to achieve "supply creates demand".

These white elephants — cost overruns of one and another infrastructure projects will eat up our 700 billion fiscal reserve bit by bit. Imagine that poor Hong Kong might need to issue debts for survival, and China will buy in the bonds. Time will come as if your balls are in his hands. He can clench his fist and crunch them, but all you can do is to say "yes". (Dongjiang water is an example). Even if he allows civil nomination or independence, there's nothing to be happy about.