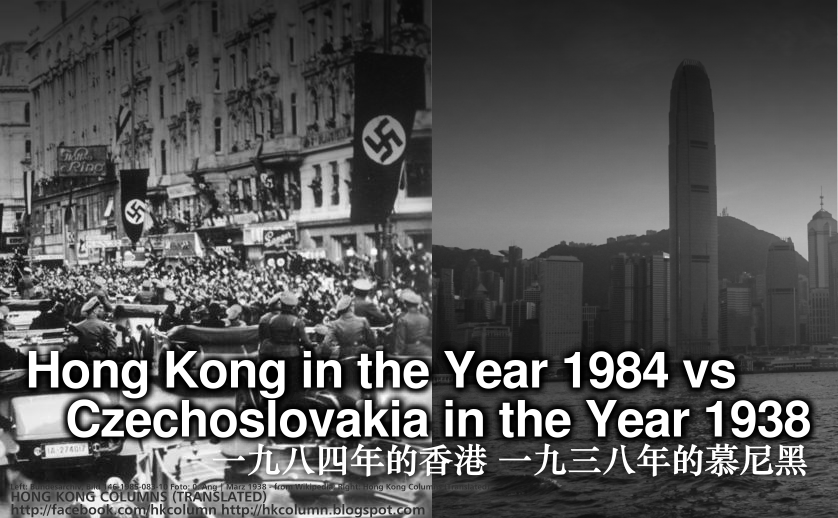 Ming Pao quoted a source from the Chinese Foreign Ministry that China intends to sign an Outcome Document in the 30th  anniversary of the Joint Declaration, during Premier Li Keqiang’s visit to the United Kingdom. Whether Li can make the trip is yet to be confirmed. The Times of London reported that “the trip would be in jeopardy unless royal meeting was on the agenda”. So it depends on the decision of the Queen whether to host a meeting with this boorish guest. But no matter what the result is, a Hong Konger with a good mind should not expect too much from the United Kingdom on her commitment towards the Hongkongers against the lucrative Chinese market. Anyway, it won’t make much difference whether the United Kingdom signs the Outcome Document or not. The funeral has been arranged. The coffin is here, the priest is ready, the bouquets are there, the candles are lighted. You don’t need the nail in the coffin to get convinced that the guy is dead.


The nails, however, do make a difference to some Hongkongers. You can’t expect too much for the intelligence of Hongkongers in politics. They are exactly the guys who are the last to get convinced only when they see the coffin gets nailed. Many Hongkongers only came to get alarmed when the State Council of PRC announced the White Paper on "The Practice of the 'One Country, Two Systems' Policy in the Hong Kong Special Administrative Region" (the White Paper). They just couldn’t imagine PRC dared to violate the Joint Declaration, an international treaty. Oh, please don’t blame on those Hongkongers, they grew up with soap operas produced by Television Broadcasts Limited (TVB). Every Hong Konger grew up with soap operas, so don’t tell me you are more intelligent than others.


As many who are interested in politics are those guys getting alarmed when the coffin gets nailed, you come to understand why many Hongkongers are still having unrealistic wishes on the United Kingdom. Many do imagine someday the British will return and rule over Hong Kong again. Okay, maybe you were still in your mother’s womb when the Joint Declaration was signed, maybe you think that the Democrats who advocated unification with China at that time should take full responsibility, fine. So please explain the following:

From the above clues, we can see clearly that Hong Kong in 1984 was in the role of Czechoslovakia in 1938.


In the year 1938, the generous British Prime Minister, Neville Chamberlain, flew to Munich to sign a treaty with Hitler, pressing Czechoslovakia to cede Sudetenland to Germany, with the absence of the representative of Czechoslovakia, hoping that could satisfy the appetite of Hitler. What came next was the full annexation of Czechoslovakia, and the invasion of Poland in the next year, leading to the outbreak of the World War II. Chamberlain’s appeasement was a total failure.


The way that the United Kingdom dealt with China was just like how she dealt with Hitler. In a word: appeasement. At the time of Sino-British negotiations, there were many Hongkongers hoping to have their voices heard, but there was never a representative of Hongkongers on the negotiation table. The PRC and Hitler shared the same vices of reneging on the treaties signed; they treated international treaties as tools for territorial gains; they had serious victims complex; and hostile towards international order and respect on contracts.


The Great Britain gave a much more mighty impression than she is. During the Second Opium War, the Qing Emperor and his officials hoped they could fend off the Anglo-French envoys en route to Peking by playing tricks. The British responded by blowing up the forts and sending troops inland into Peking. The Summer Palaces were burnt down. That was the way how the British used to deal with Chinese. The comments of the Chinese by the Europeans at that time: ignorant but wiseacre, lack of the sense of honour, which are still applicable to the Chinese today. In contrast, the way that the British handled the “barbarians” degenerates with her influence on global affairs.


[P. S. Upon completing this article, it was reported by Times of London that Li Keqiang will be received by the Queen. So what the glorious Kingdom looks like today.]
Posted by Azurino at 20:39