Kwok: If Jesus was born in this day and age in HK

If Jesus was born in this day and age in Hong Kong
Translated by Chen-t'ang 鎮棠, edited by B Clarke, written by Kwok Chun-fai
Original: http://www.passiontimes.hk/article/03-29-2015/22057/ 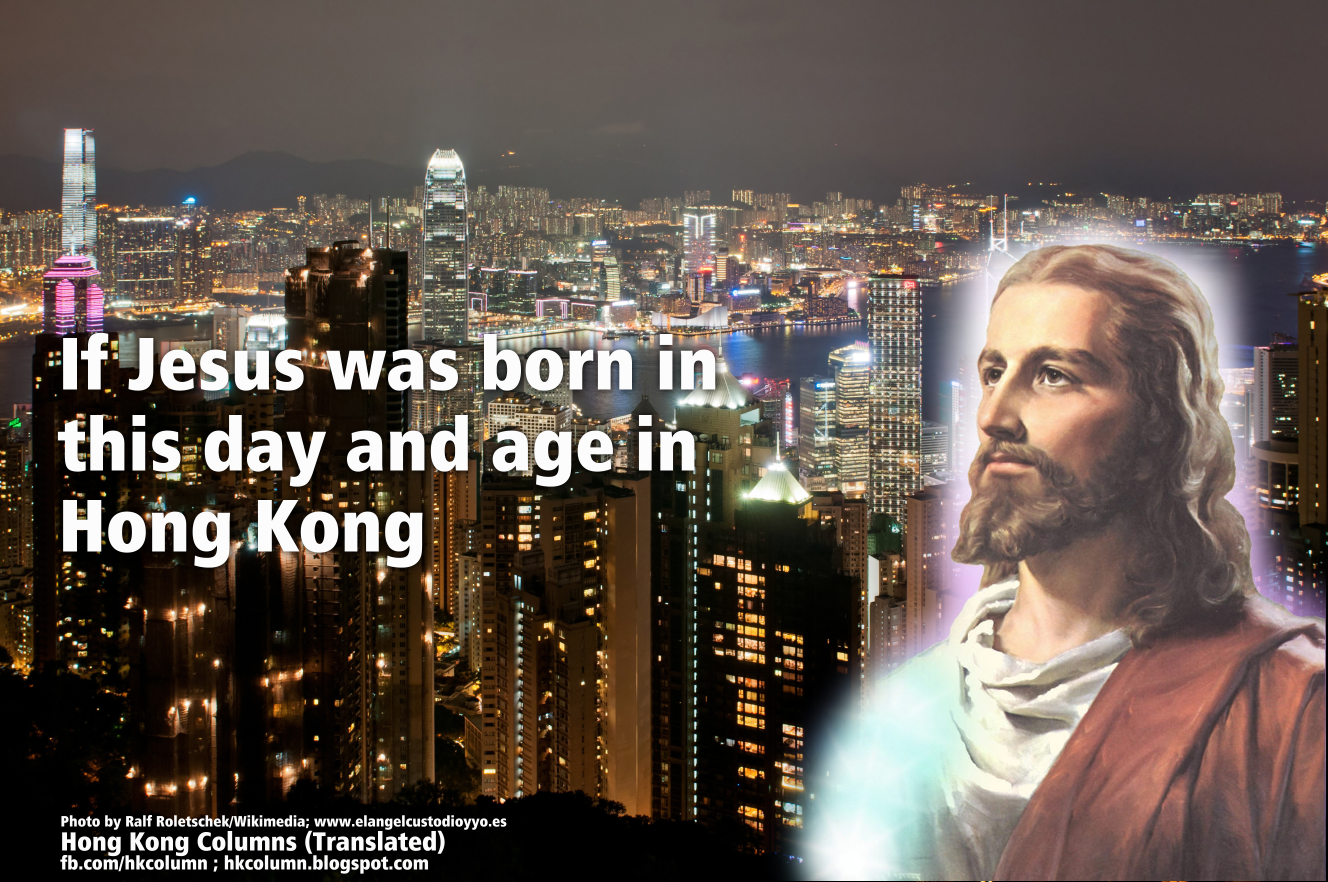 On reaching Jerusalem, Jesus entered the temple courts and began driving out those who were buying and selling there. He overturned the tables of the money changers and the benches of those selling doves, and would not allow anyone to carry merchandise through the temple courts. And as he taught them, he said, “Is it not written: ‘My house will be called a house of prayer for all nations’? But you have made it ‘a den of robbers.’”
Mark XI: 15-17

High Priest: “That country bumpkin from Galilee, Jesus, is not peace-minded, and he does not have an analytical mind. Silence is golden, and Christians should learn from Christ – when he was killed, he didn't moan or groan.”

A ‘neutral’ citizen in Jerusalem: “I wish the House can be a house of prayer for all nations [Isaiah 56:7], rather than a place where people buy and sell. But when Jesus becomes so violent and pushes people's things onto the ground, then he is wrong. If there are more peaceful ways to achieve justice, I will definitely support him.”

A blue ribbon supporter in Jerusalem: “I am of course against this. What am I actually against though? I don't know. When someone supports something, someone has to be the opposition!”

A ‘mainstream’ citizen in Jerusalem: “Preventing someone from making a living and their daily bread is akin to killing their parents. I am in the retail business, so stop bothering me with your mess and just let me go to work. What, standard working hours? 24 working hours per day now? Ah well, whatever, not much different from how it is now.”

An economist: “Cleaning the House will cause a 350 billion loss for Jerusalem per day. How did I calculate it? Who cares? Cleaning the House may also cause the stock market to plunge as well as the property market. I am thinking whether I should include the spread of the Ebola virus into this.”

An ‘expert’: “After Cleaning the House, the retail industry has become weaker and there are less sales coming through. What Jesus did will affect how tourists perceive Jerusalem. Less and less Individual Visit Scheme visitors are coming through now, and the impact will soon be seen. The international image of Jerusalem is currently under threat.”

A resident around the House, Jerusalem: “When there were lots of transactions taking place in the House, there were a lot of animals, pigeons and goods brought by the traders. We were constantly bothered and hit by those animals, with the goods getting in the way - and this affected our lives. The things in the House have become much more expensive as a result of speculation, yet nobody heeds to our complaints. The House should be a house of prayers for all nations. We want to pray normally. Now I thank Jesus for giving us back our normal lives.”

Executive Council Member of Jerusalem: “Because Jesus does not allow people to get things and pass through the House, the other two roads have been fully saturated. We have just passed the bill of constructing a third pathway (‘third runway’). We allow white elephants to pass through all the time. This might not solve any problems or bring good to the people in the House, but the price is dirt cheap – 141.5 billion! Though everyone will have to pay for this eventually, trust me, you will get advantages from it for sure.”

Chief of soldiers: “Our soldiers will not play tricks on Jesus. Purple robe? A crown of thorns? [John 19:2] Oh c'mon! We exercised minimum force like a caring mother would and we got the job done. The Chief Executive of Jerusalem has thanked me in public. Trust me, everything is as normal. It is about some 160 days, so please be more patient.”

Chief Executive of Jerusalem: “We will set up a 'Bye-bye Jesus Committee'. We are serious, because he wants to be the king of the Jews. It is absolutely reasonable to believe he is backed by the 'external powers', for a person who 'has no place to lay his head' [Luke 9:58]. We have received reliable information, saying that the Jesus asked people to follow him and seek first his kingdom [Matthew 6:33]. Getting rid of local awareness and those terrorists who support independence are of the utmost importance. Long live Caesar!”

Jesus was resurrected three days after his death – too furious.
Posted by Azurino at 22:47:00