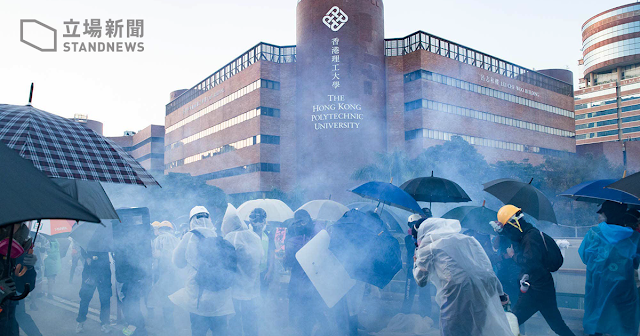 [HKCT note: We are trying to back up long articles we have translated during the anti-ELAB movement and thus we are uploading them here again.]
Since the anti-extradition law protests in June, Hong Kong’s motto has evolved from “Hongkongers Add Oil” to “Hongkongers Rebel” to “Hongkongers Avenge,” reflecting the incessantly growing dissatisfaction felt among the protesters. This is all because the state violence and absurdity has been growing day by day.
The death of HKUST student Alex Chow, who fell from a carpark amid police operation, was a trigger that ignited the grievances accumulating in the city for the past few months. Citizens once again commenced the “Citywide 3 Suspensions” (三罷), which included occupying traffic arteries near major universities. However, as is their wont, the police continued to violate convention, forcefully storming and raiding campuses. The recent bloody siege of CUHK and PolyU will become an inextinguishable page in the history of Hong Kong.
The siege of universities is an extremely serious humanitarian crisis. Over 2,000 rounds of tear gas were maniacally fired at CUHK, and the sky was aflame. China-manufactured tear gas release high levels of toxic chemicals, including cyanide gas and the carcinogen Dioxin, which is extremely hard to clean. Yet the police opened fire crazily as if to annihilate their opponents. No wonder foreign journalists accused the police, who lack conscience and morality, of being more frightening than ISIS.
The siege on PolyU continues to this day, and over 1000 people have been arrested and registered. Even though food and water rations on campus have been cut, and over a hundred citizens have been injured, the government barely moves a muscle, vowing not to end the siege until a “surrender,” treating the citizens like war criminals.
Lawmaker Ted Hui Chi-fung has experienced the conflict from within PolyU firsthand. He attempted to calmly reason with the police, but discovered that many policemen are in a euphoric, even deranged state, constantly hurling insults at the ordinary citizens trapped inside. The police were even photographed entering the campus grounds, not to arrest anyone, but to open fire at extreme proximity, treating the citizens and students as live targets. Can such vengeful means of smiting ordinary citizens be considered the actions of a public servant?
Inside the campus was panic and helplessness; outside, anxiety and heartbreak. Citizens did their best to “bloom” in various districts, attempting to “Besiege and Rescue,” but to little avail.
The police, holding submachine guns and armed with live ammunition, even loudly threatened the citizens that they would “Re-enact Tian'anmen Massacre.” In pitch darkness, masked police fired tear gas and rubber bullets in abundance, hurtling towards crowds like a speeding minibus. Smoke and flames rise everywhere in Hong Kong, as if it is a battlefield. Even without tanks, this is already a re-enactment of Tian'anmen Massacre.
The police changed their strategy of sieging PolyU, aiming to divide protesters and use various means to wear out their morale, to thoroughly crush their mentality. Looking at the bigger picture of the movement, the Siege of PolyU has gains as well as losses, but I hope that everyone can ultimately view the incident in a positive light. Citizens were terrified, but relied on completely nonviolent logic to attempt to break the siege at PolyU. Although not every protester at PolyU was successfully rescued, the incident showed that citizens continued to stand together with ties unsevered, a shared belief of unity.
Regardless of their ways, beliefs, or backgrounds, those who truly love Hong Kong remain extremely united. This home is dear to everyone’s hearts.
Hong Kong has not imposed curfew. Yet the city is dealing with the realities of martial law and warfare, and even facing biological hazards. Since June, the police have already fired over ten thousand rounds of tear gas, covering communities with deadly chemical substances. No one was spared. Can the industrious Hong Kong people still pretend to sleep, or pretend that everything is normal?
Students are the backbone of social movements, and schools are symbolically significant: they are the “home” to students and alumni, the “cradle” that will nurture the next generation, and the “bastion of knowledge and values” in a city. It is for this reason that so many protesters, whether they belong in schools or not, do all that is possible to protect these buildings.
This is something that those whose hearts lack a home, knowledge, and principles can never understand.
Sam Choi Chun-wai is a lecturer in The Education University of Hong Kong's Department of Asian and Policy Studies.
Author's Note:
It’s a pity that Pentaprism II’s critique of the Hong Kong police’s inhumane actions brought about a bunch of mean, pro-China complaints. Only after several hours of its online rerun, the video was forced to be taken down! RTHK’s staff resisted valiantly, and I also want to thank them for their hard work!
Translator’s Note:
1. To “bloom”  (遍地開花 pindei hoifaa) means to sprout up [i.e. have protest events] across the city in groups.
2. “Besiege and Rescue,” originally an idiomatic expression in Chinese, is a diversion tactic whereby one besieges the enemy’s home base in order to rescue those besieged elsewhere.
3. Pentaprism II (左右紅藍綠) is a current affairs programme broadcast by RTHK.
Posted by HKCT at 18:26