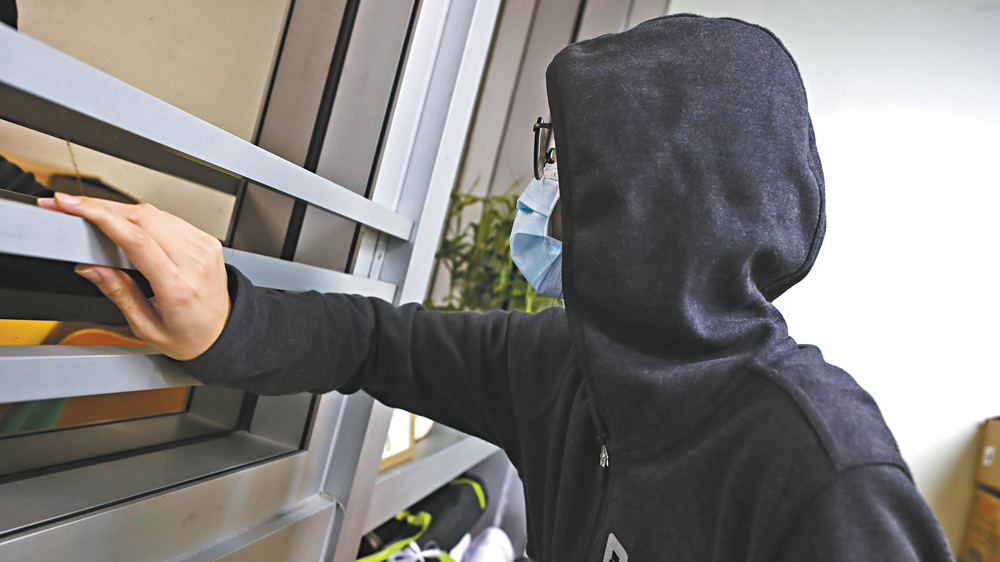 What’s the meaning of Valentine’s Day? Isn’t it, after all, just another commercial holiday to boost consumption? Without extravagant gifts and fancy candlelight dinners, for those protesters facing hard, cold walls while their loved ones remain beyond reach on the other side of the walls, heart-wrenching love is all that matters. When the time spent apart is longer than the time spent together, would the line connecting lovers become thinner and thinner, or more sturdy and steadfast? What sort of lover would say such folly as “I’ll wait for you even if I have to wait 10 years”? Love, perhaps, is crazy after all.

- Waiting for You, in this Desolate Classroom -

“Our time apart has been longer than our time together.” Hayley (pseudonym) and her boyfriend were both arrested; for the past year, she had been on bail while he remained remanded pending trial. They had belonged to the same small team, walking the streets together. She recalled that they met for the first time at PolyU, and since that fateful meeting, she decided that she would spend the rest of her life with him.
After they escaped from PolyU, they knew that they had long been under the watchful eye of the police, and they could do nothing more than pretending to be a couple taking a stroll at night. That night, there weren’t any pedestrians on the street, making the two painfully obvious. Before they knew, riot police began to chase them, and he held her hand tightly as they ran for their lives to escape arrest. Such dramatic scenes as if out of a movie, message exchanges in a group, and several in-person meetings, sufficed to give her the impression that this was someone who had been through thick and thin with her.
Sitting on a chair, she tightly grasped her hands, and only smiled when the reporter asked her what she liked about her boyfriend. She told the reporter that he was several years older than her, and took care of her conscientiously, “He’s a really nice guy, taking me everywhere with him. Within a short time, I had already met his parents, and he treated me as someone very important to him.”
Before they really got to know one another, they had already decided to be together, and she admitted that it was only after they officially became a couple when they really began to get to know one another. Despite participating in the social movement together, their actions weren’t always in sync, because he always felt that he should be at the frontlines, while she – due to consideration of her physical condition – could only remain in the back and take up various supportive positions. Whenever they went out, they would always turn on their location to let the other person know where they were. She had complete confidence in him, but he was constantly worried that she might have an accident.
“I know that if I were to be subdued, he would save me no matter what.” Many couples, even after being together for decades, might not have complete mutual trust, but they had only been together for several months, yet their trust was solid as a rock. Then on that fateful night, the hasty knocking crushed their sweet dream. The two were arrested, and she “worried that he would be beaten, and worried that I would not get to see him anymore.” She too had been arrested, but she did not worry about her own safety, and instead, worried that she could not do anything to help her boyfriend.

- Teaching Others the Importance of Persistence -

72 hours later, her case was mentioned in court, and she could finally see her boyfriend again. As soon as he saw her, he began to cry, “I was so heartbroken…” She tried to hold back her tears because she didn’t want to cry in front of him, didn’t want him to think that he had gotten her into the mess. Afterwards, it was nearly a year of him remaining in remand.
At the start, she did not visit him, and only passed letters to him via a friend. Because they were arrested together, she worried that there would be suspicion of obstructing justice if they met, but when the lawyer later told her that she could visit him, she began to visit him every week. This went on for quite some time, and she said that she must seize each and every opportunity, “Whatever time there is to meet, I will see him.” She was worried that after he was sentenced, she would not be able to meet him as frequently.
They were both nearly 30yo, and in the face of 10 years or more behind bars, she said that she was already mentally prepared. They could meet now several times each week, each time for 15 minutes; she said that this actually brought them closer together, and made them miss each other more; the physical separation could not divide them. He of course told her before not to wait for him, because he didn’t want to waste her youth, “I’ll definitely wait, this is something that we’ll get through together.”
When asked if she regretted participating in the social movement, and if she regretted falling in love with this man, she felt that society needed reform, and the government had forced the people to take such measures. As for this man, he was her comrade, her lover; she appreciated his sacrifice of his future and his life for the city, and she was grateful for his pure passion.
“Every person deserves to be loved and cherished, and serendipitously, we found each other.”

- Finishing the Finale in Your Embrace -

Last Valentine’s Day, they were in each other’s embrace, but this year, they are apart. However, she didn’t feel sad, and said that she was learning to live on her own, “As long as you get used to it, it’s not too bad. If one year is too much, how can I last a decade?” She then said with an air of optimism that each 15-minute visit was like charging her up for meeting the challenges in life, helping her to happily get through another week.
He told her that in his dream, he saw her and held her, but when he woke up, he found himself alone in the cell, staring at the cold, hard walls. She couldn’t bring herself to continue, since overcoming her loneliness was one thing, but bearing the other’s loneliness was an entirely different matter. At night, she could only recall the fragments of their time together, the first time they hung out like any other couple, what they ate, where they went together. She remembered all these moments deeply, “If I can’t even remember these things, then there’s nothing left to hang onto.”
She regretted that they had very few photos together, “We must take more pictures together once he returns.” During the visits, she always longs to hold his hand; remembering that the next time they could hold each other would be in ten years’ time, she falls into melancholy again, “Why must it be so hard.” After a long conversation, she did not talk much about her own case, as if it was not important, but that only he was the most important thing to her.
Posted by HKCT at 18:18