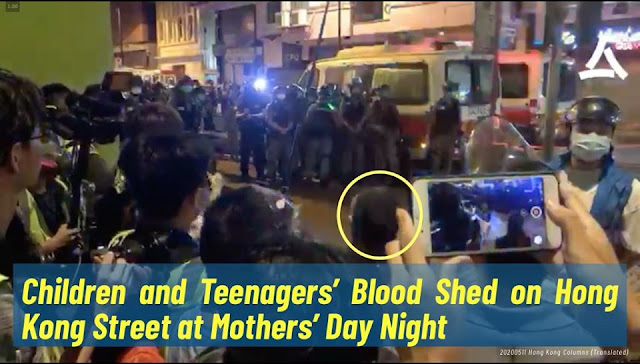 For the children of some mothers, what they have gone through tonight might be an unforgettable trauma in life that any parent wants to see the least: brutal arrests of their children covered in blood.

Protests have started in the afternoon across Hong Kong but the crackdown intensified as night fell. Multitude of shop owners wished the ease of the coronavirus pandemic would bring customers to revive their businesses from critical conditions. However their wishes have perished tonight as Mongkok, one of the most vibrant commercial districts featuring all types of retailers in the city, became the epicentre of the Mother's Day protest.

Beside a mass arrest of more than 100 pedestrians in one of the most popular street for shopping, Sai Yeung Choi street South, it was shocking to witness how many young people, literally children and teenagers were arrested violently by Hong Kong Police tonight.

The arrest of children started from a 13yo boy at Gateway shopping mall in the afternoon. He claimed to be reporting as an aspired journalist but subsequently pinned on the floor. It took around 100 riot police with batons and rifles in hands to arrest a boy, as passers-by gathered with shock and discontent expressed.

After 20:00, as police stormed the streets of Mongkok, a trendy shopping area favoured by most young people. More boys and girls in their teenage were seen fiercely pinned on the floor in their necks, spines and tailbones by raiding riot police and arrested. Some of them even covered in blood as reporters observed.
Children walking with their mothers were not immune from the mass arrest. A woman in her 50s was peppersprayed directly in the face after telling policemen she was the mother of the boy they held. In the interviewed that I did with her, she said it was supposed to be a wonderful Mother’s Day after-dinner-walk. Instead of a Mother’s Day gift she was expecting from her son, she witnessed her son held captured by the riot police raiding right from the street corner. “As a mother, of course, I would simply tell them (the police) that it was a mistaken arrest, that he was my son!” She added.

Another mother (in yellow circle in this photo) was seen weeping as begging the police to release 2 of her daughters, aged 12 and 14 who were just out for desserts after dinner. The bitterness of witnessing her daughters being captured tore her heart at the festive night.

Carrie Lam, as a mother of 2 who she sent to the UK long time ago, claimed she has always stood on the side Hong Kong young people and would unreservedly fight for their futures. As she saw children’s blood shedded on the streets of Hong Kong and heard mothers’ wails as the consequence of her commands to the police force, can she fall asleep tonight?