Since 2013, people might oppose the vigil in Victoria Park held by the Hong Kong Alliance in Support of Patriotic Democratic Movements in China (the Alliance), but people do not reject commemorating the Tian'anmen Massacre itself. Many other commemoration activities of the Massacre turned out. However, this year, there are people (who are not pro-Beijing) to propose not to commemorate the Massacre in the future. Recently, Althea Suen, the president of the HKUSU, said "I think that within one or two years, commemorating the Massacre should no longer be on the agenda of the tertiary education sector, and a period should be put there." She added that "Commemoration of the Massacre based on the 'compatriot' identity should be ended. " At the same time, Samuel Lai, Acting Chairperson at Current Affairs Committee, HKUSU Council, said, "We should put an end to the commemoration of the Massacre based on patriotism".

The "wind" that blows off the Massacre commemoration candles might not be Beijing, be it vindication or further suppression, but Hong Kong's nation awareness, or more commonly known as "localism" . In fact, in 2013, regarding whether to attend the vigil in Victoria Park, columnist Joseph Lian already said, "The year Hong Kong does not condemn the Massacre in Victoria Park, the year Hong Kong independence is full-fledged to made its existence among us [ref John 1:14]".

Where Does the Tradition of Massacre Commemoration Come From?
Before asking whether Hongkongers should continue to commemorate the Massacre, we should first ask: why are there so many people commemorating the Massacre every year? Why the number of attendants is far less in commemoration vigils in Taiwan or Macau?

Some commentators said the commemoration of the Massacre in Hong Kong is not only out of patriotism, but also out of the pursuit after democracy, freedom and human rights, as well as the persistence to justice. This is untenable: there are so many tragedies in the world, and no society will commemorate all. Choosing which tragedy to commemorate depends on whether such tragedies are significant to that society. Therefore, human rights or justice cannot be the only force for the community to commemorate an incident for such a long time so regularly, instead, specific identity and community ties can.

Why would Hongkongers supported the Beijing students' protest in 1989? Why were Hongkongers having strong reactions to the Massacre? Why were there so many large scale of commemoration vigil every year? I would like to cite an analysis written by Leung Man-tao back in 2005:


"During April to June 1989, the unprecedented passion of the Hong Kong society is related to the identity as Chinese. Songs prevalent at that time include "Be a Brave Chinese", "I am Chinese", "Descendants of Dragon" and so on [...] After two decades of growth and separation to the Mainland's political and social environment, Hong Kong and its people have a chance to know more about its motherland and to "re-identify" themselves as Chinese. Many Hongkongers might not know exactly what the Beijing students demand, but they will spend lots of time to listen to the radio and watch the TV, to discuss the trend of the movement — the way to connect China and themselves, who were in a British colony. Therefore, compared to the 1 July protest, the 1989 protest is actually an unprecedented patriotic movement.

Leung also pointed out the support of Beijing students from Hongkongers were not only because of "the patriotic mentality of overseas Chinese", but also because Hongkongers hoped that the success of China's democratic movement can ensure the freedom and autonomy of Hong Kong, and preventing Hong Kong from the "death of Hong Kong" by 1997.

"Lots of commentators have pointed out that the [then] passion of Hongkongers was built on the envisage of the future. Many Hongkongers believed that if China has started a political reform towards democracy before 1997, then the handover in 1997 would not be that fearful [...] Democracy and patriotism have since entwined with each other, thus becoming the largest momentum of the Alliance, and the political capital and background of pan-democrats, including the Democratic Party."

The ending was universally known - the Tian'anmen Massacre. Rich Hongkongers applied for emigration; poor ones demanded to accelerate the progress of Hong Kong's democracy, and hoped for an unchanged situation after 1997 with a democratic system. But at that point, many Hongkongers still see themselves as Chinese. After the 1991 Eastern China flood, Hongkongers donated HK$700 million;  in 1992 Barcelona Olympics, many Hongkongers supported Team China; in 1996, the Senkaku/Diaoyu Islands conflicts have caused many people to join protests organised by the Action Committee for Defending the Diaoyu Islands (ACDDI, and the movement is known as "Baodiao" movement), and make donations for them to go to the Islands. After David Chan Yuk-cheung, a prominent Baodiao activist who drowned around the seas of Diaoyu Islands, Democratic Party and DAB had an unprecedented joint candlelight vigil in the Victoria Park to commemorate this "Baodiao hero". Supporting the Beijing students' movements and commemorating the Massacre are ordinary examples of the "patriotic overseas Chinese mentality" by Hongkongers at that time — to be safe patriots outside China.

The Massacre Enlightens Hongkongers Politically, But Has Become Balls and Chains?
It is well known that the Massacre is the incident that enlightens many Hongkongers politically. Many Hongkongers participating in democratic movements started to care about the politics of Hong Kong and China, and started various confrontations. League of Social Democrats and ACDDI member Bull Tsang Kin-shing is one example.

When compared to recent "localist" movements, these democratic movements do not deny "Hong Kong is part of China" and "Hongkongers are Chinese", and based on these two principles, the activists supported democracy, human rights and autonomy for Hong Kong. The protest against brainwashing National Education in 2012 did not deny such principles (even they were led by new generation), and largely supported "loving China, but not loving the Party" — or "Hong Kong style patriotism". For the deliberation of the "Occupy Central with Love and Peace" and "I want universal suffrage" movement during 2013 to 27 September 2014, the main principle is not to challenge "Hong Kong is part of China". This explains why there were many youngsters who were not yet born during the Massacre went to Victoria Park Vigil during 2011-2014, and sung patriotic songs. This is because it was a stance against HKSARG and CCP. However, these democratic movements declined after the tearing gas shot on 28 September 2014.

Rumours of "cops have fired" or "PLA has came out of the barracks"" spreaded on the Internet on 28 September. Many people remembered the Massacre. In order to avoid the same tragedy in Hong Kong, they asked protesters to leave as soon as possible. On 1 October, students have formed a chain from letting other protesters barging the PRC national day flag-raising ceremony in Golden Bauhinia Square. It was said that the reason is not to give excuses for Beijing to launch a carnage. Such thoughts and moves are definitely related to the Massacre. Thus, we can say the memory of the Massacre has deterred some protesters from escalating their actions.

Whether the memory of the Massacre is a force or a hindrance to the post-Umbrella confrontation is a food for thought for you.

The trend of Hong Kong independence has arised. Some pro-Beijing politicians said pan-democratic parties can be the "loyal opposition camp" that supports One Country, Two Systems. Then it is unavoidable to compare the development of Taiwan independence movement and Hong Kong in recent years.

If one looks at the political propaganda of KMT in the early 1980s, one can easily find out KMT often condemned Taiwan independence groups having close connections with CCP. After KMT has moved to Taiwan, they knew it was impossible to "counter-attack mainland China". After Chiang Kai-shek passed away, Chiang Ching-kuo even used "Three Principles of the People Unites China" to replace the slogan of "counter-attack mainland China". Li Teng-hui became the president in 1990s, and thus some old Kuomingtang members withdrew from KMT and formed New Party, in pursuit of ultimate unification. This move was welcomed by Beijing. In 2000, when Democratic Progressive Party started ruling Taiwan for the first time, KMT and CCP have become closer as they are against Taiwan independence. If Beijing sees the archenemy in Hong Kong as the "Hong Kong separatists", then it is important to look at whether CCP treats pan-dems in the way that CCP treats KMT as the allies of anti-secession, or Tongzhan subjects.

Chip Tsao and Ivan Choy have pointed out that what Beijing fears most is not lots of participants in the Victoria Park vigil, but rather, no participants at all. If so, commemorating the Massacre in Hong Kong may cause Beijing to be "unhappy" on the surface, but deep inside, CCP welcomes such commemoration because this is what Christopher Chung said, "being local without separation". In 1958, CCP attacked Quemoy and Matsu, the two islands held by KMT which are close to mainland China. On the surface, CCP attacked with strong weapons, and the US even asked Chiang to give up these two islands, but Chiang did not do so. CCP did not want KMT to leave, because if they did, the ties between Taiwan and mainland China will be completely severed, and the situation of Two Chinas will be formed. This is what Mao and Chiang opposed, but the US supported (Taylor, 2009). Commemoration of the Massacre might be the main emotional tie between mainland China and Hong Kong, and be treated as a tool to suppress separatism. Few years ago KMT veterans went to mainland China, and said "KMT army or PLA are all Chinese army!" By the same token, Hong Kong Alliance in Support of Patriotic Democratic Movements of China and Communist Party of China also contain the word China.

Conclusion: Re-consider About the HK-China Relationship, and One Would Doubt the Necessity to Commemorate the Massacre
After the handover in 1997, Hongkongers are no longer "overseas Chinese" under the British rule, but Chinese nationals under the (though indirect) rule of PRC. In face of Beijing's rule with HK-China integration, the difference between Hong Kong and China gradually diminishes. Hong Kong is no longer a British overseas territory with political stability with nice livelihood. Members of public having confrontation with the police force on the street is no longer something afar like the Tian'anmen Massacre, but rather places that one can easily access to. It is not only normal but also mature and responsible for Hongkongers, especially younger ones, to re-consider the Hong Kong-China relationship. Other Hongkongers are irrational and irresponsible to backfire them without rhyme or reason — especially those Hongkongers who can emigrate whenever they want and be a "patriotic Chinese"in the West. 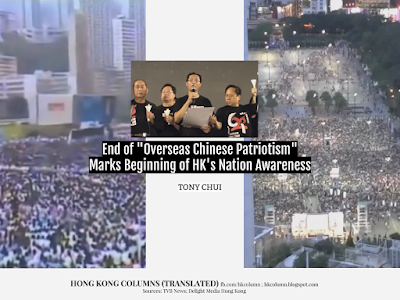 Reference:
Jay Taylor (2009): The Generalissimo: Chiang Kai-shek and the Struggle for Modern China / End of IV 2 - Managing the Protector
Posted by Azurino at 00:37