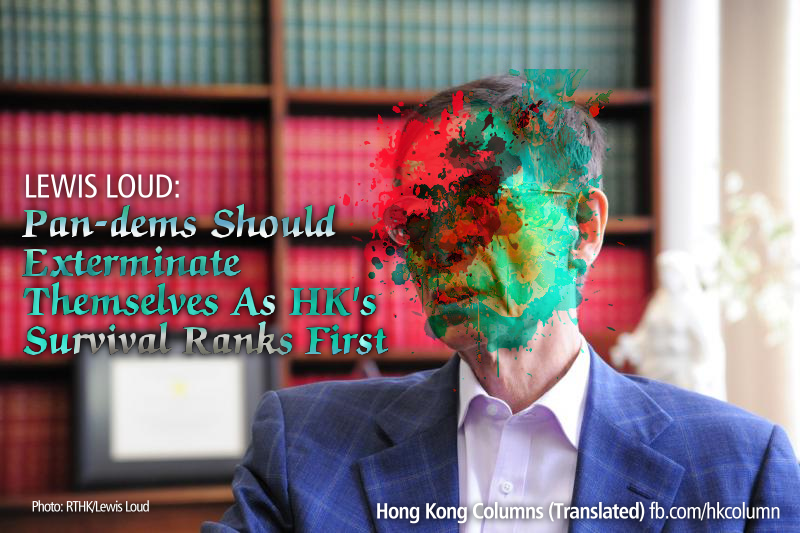 "It is a menace for the ones who are endangering the society to cheat death." says Confucius. Martin Lee and the last-generation politicians all fall into this category. Up to the present day, Martin Lee still sticks to his all-time standing dish, saying that Xi Jinping, with de facto power, is dedicated to reform, which makes Lee himself "hold a gleam of hope" over CCP's concession on the matter of Hong Kong's constitutional reform. Enough is enough. This aloof-from-the-reality politician should better stay retired, but rather be such a menace in the society ever again.

During the class boycott in September 2014, Martin Lee said to the Hongkongers, "The democracy you're now fighting for is not only for HK but also for the 1.3 billion people in mainland China." People like Martin Lee and Szeto Wah who are either underground CCP members or people born without clearheaded minds support democratic reunification. They claimed that Hkers owe it to the mainlanders to do so since we were lucky to escape from the disasters under PRC's regime. These politicians have contributed quite a lot on China's plan gobbling up HK.

In 1989, these "democratic reunificationists" were expecting the "reform and opening up" being led by the "open-minded faction" of Zhao Ziyang, so that China and Hong Kong could share democracy and freedom. Those students from the patriotic universities were too naive to ask these questions in the letter to Zhao, such as "Will there be democracy after the 'reunification'?" This is a remarkable pathetic page of Hong Kong history. You may wonder what connected "anti-colonialism", "patriotism" and "democratic reunification" all together. The answer is the Chinese-style servility — "No matter whatever it takes, virtuous leaders will appear someday to uphold the justice and to solve all problems for good."

These "democratic reunificationists" were more than happy to see "reunification", and to wait for China's fulfillment the pledge of implementing democracy in Hong Kong, though such promise is supposedly not happening anyhow. Just as Zhao Ziyang who was knocked down at home for the rest of his life, democracy within China is but a flash in the pan. Democratic reunificationists, democrats and the bunch of people from the Hong Kong Federation of Students (HKFS) have thus lost their reputation.

They have been pro-China from the very beginning which justify their opposition over HKers participation in the 1980s' negotiation — Due to the blind belief of the hierarchy of Chinese ethics that takes a virtuous leader to decide everything else.

The Hong Kong Alliance in Support of Patriotic Democratic Movements in China (HKASPDM) gained support sticking it to the Tian'anmen Massacre. Recently. The organisation recently launched a zero-awareness petition campaign to mourn Zhao Ziyang. This is how their ideology works — Crying for Zhao Ziyang, the "open-minded" leader who once almost had the chance to become a virtuous leader. Some of the members from the organisation become politicians, and claimed that they will fight for the democracy of HK. This is nothing but a lie, an utter lie.

The pan-democrats in Hong Kong are standing still on their stance — supporting China in "an open-minded manner", in which they cry for the Tian'anmen Massacre and support "rebuilding a democratic China". When the human rights activists in China praise them, they are happy as a clam. When the colonisation and bullying of Hong Kong is undergoing, they rather choose to pretend nothing has ever happened, or worse, rebuking Hongkongers in return.

D100, media ally of pan-democrats, even said "If Chow Yun-fat becomes the Chief Executive, will you 'pocket it first'?". In their logic, the system is nothing at all and what matters is the presence of a good emperor. From HKASPDM to pan-dems, HKFS, D100, to Leung Kwok-hung (Long Hair, the patriot who stayed under the pretext of Trotskyite) — no matter what the political spectrum of the pan-democrats in Hong Kong is, left or right, they all tend to stand in the side of infighting losers in China. To clarify in a clearer manner, Hong Kong is never taken into consideration all this time.

So, the action of Richard Tsoi, a member from HKASPDM and Democratic Party, reporting Hongkongers' "discriminating conduct" over mainlanders and "unduly exploitation" of local welfare resources to United Nations. To people as Tsoi, they are in the illusion of implementing their own "duty and obligation". Pan-democrats are but the remnants of the "open-minded faction" in PRC infightings. Now, Martin Lee and Apple Daily is still having fantasies towards CCP. The difference lies only on the change of subject, Xi Jinping instead of Zhao Ziyang, who is a genuine dictator. In the eyes of these blindly patriots, there are always hope towards a dictator turning into some sort of benevolent leader.

If the pan-democrats are not exterminated, Hong Kong will never be released from the bondage. Some who propose a more inclusive attitude towards pan-dems is in fact casting doubts on the right of Hong Kong autonomy. If these people, embracing the idea of emperor's regime should be regarded innocent, then what can still be left for the dignity of Hong Kong? None. Pan-dems should exterminate themselves as Hong Kong's survival ranks first.
Posted by Unknown at 10:19