Atsuna: Commoners Can Be Accomplices of The Authoritarians Too

Atsuna: Commoners Can Be Accomplices of The Authoritarians Too
Translated by Chen-t'ang 鎮棠, Written by Atsuna
Original: http://www.passiontimes.hk/article/02-14-2015/21191 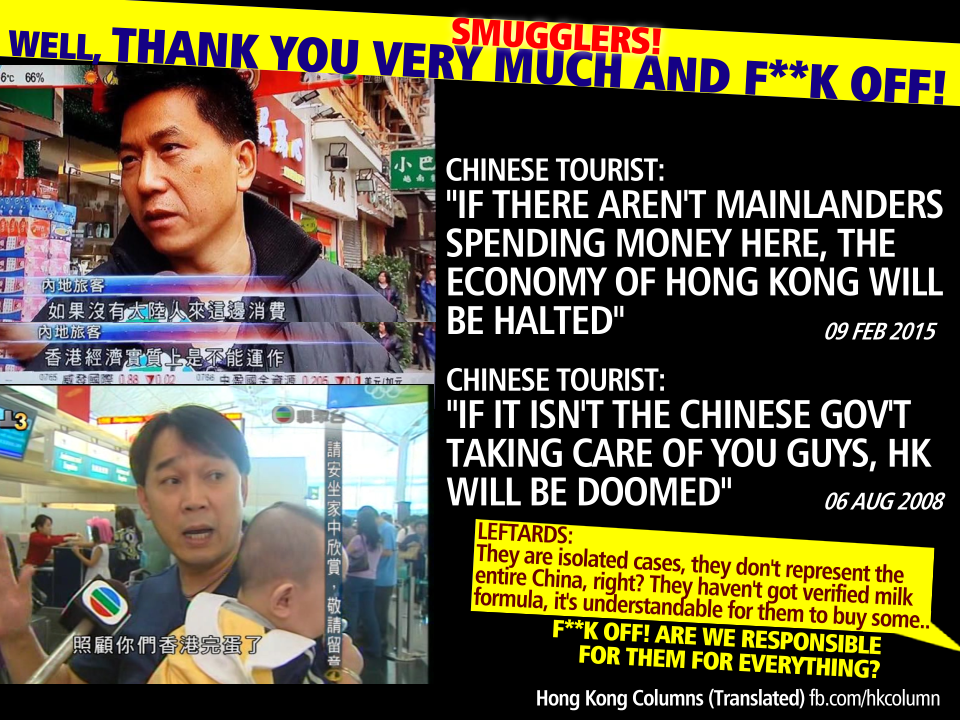 If the "political correctness" indoctrinated to the minds of some Hong Kong or Taiwan celebrities, they will be backfired by those mainland "fans". Chapman To once said in his Facebook page, "Some unreasonable mainland netizens were born in the 1990s, those "fans" of celebs should be youngsters who should be supporting their idols unfailingly. Or at least in normal countries, they should be those least interested in politics. Although there were many student campaigns in the track of history, they criticised the authority. Chinese youths are more peculiar, mentioning the national interests all the time and linking the party's interests to themselves.

Arthur Schöpenhauer once said, "The cheapest sort of pride is national pride, for if a man is proud of his nation, he has no qualities of his own of which he can be proud. Otherwise, he would not have recourse to those which he shares with so many millions of his fellowmen. But every miserable fool who has nothing at all of which he can [be proud adopts], as a last resort, pride in the nation to which he belongs; he is ready and glad to defend all its faults and follies tooth and nail, this reimbursing himself for his own inferiority."

So it is more than understandable when Chinese youth can turn a blind eye on things like Liu Xiaobo and Chen Guangcheng. Be calm over injustice (such as illegal land acquisition by the government, using backdoor 'guanxi' benefit their jobs or studies and be utterly patriotic than the Blue Ribbon thugs. The silence is finally broken -- to defend for the national interests. Sort of a compensating, isn't it? But they simply stop thinking and let the party decide on what to speak.

In Zhang Yihe's book. She wrote, "A scholar thinks that, 'If the subjects follow and get used to the method of thinking pig the rulers, then they are accomplices." Chinese get hysteric when they heard Taiwan independence, Hong Kong independence, Tibet independence, or Xinjiang independence. They do not even ask why. If some people even dare not to curry CCP's favours, such as putting a cap on IVS, they just became the "spokespersons of the Chinese Foreign Ministry" with evil faces. Their "enthusiastic attachment" to politics are but beyond one's imagination. It is hard to imagine they live in a country where "Communist Party" becomes a banned searching keyword on Baidu.

Milk formula? Poison. School buildings? Jerry-built. High-speed rail? High-speed accidents. Money and Guanxi? All fixed. People's lives are under the "Russian Roulette", depending on one's luck. Youngsters know the corruption of the country, and the problems in the Communist Party, but when the national interests is involved (high-rank officlas' interests, to be specific), they get "untied". People say "Where they sit affects how they think", but in Chinese logic, leaders decide how the people think. Or else why commoners think of the national interests all the time as if they were cadres?

So stop saying Chinese tourists are commoners. Ask them their views on TWI or HKI, or curb on IVS. You will know they are "accomplices", as Zhang said. When there are disasters upon Hong Kong, Chinese netizens enjoy a lot with Schadenfreude. Leftards are pinpointing at "fascist Hongkongers", but why did they turn a blind eye to hate speech from the Chinese people? Wouldn't it be too scoundrel?
Posted by Azurino at 23:54