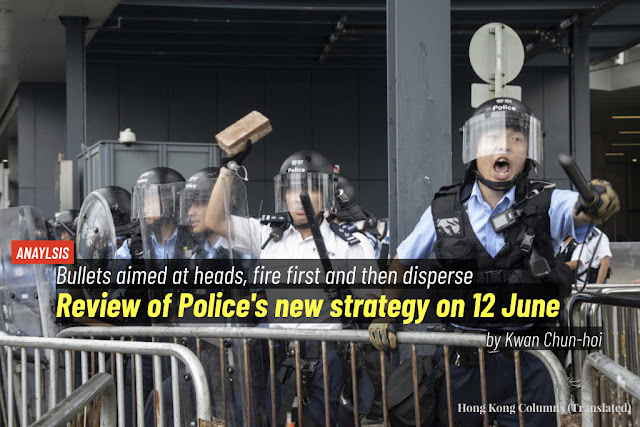 "What a pleasure to see that! I thought we only fired during training. That’s real! There it is! (laughs) And I would not allow a “2.0” version to happen." In a video recorded within the police force as obtained by Apple Daily, a police officer seemed to be proud of firing, who "will not allow Umbrella Movement 2.0 to happen", talked with a sense of mission.

Police and members of the public hold opposite views on firing. I stayed at the scene for 8 hours (10 am-6 pm) on 12 June and could give an analysis on the tactics employed by the Police in dealing with mass movement which was conspicuously different from the recent years. But the first question to be asked, both from the Hongkongers and Police, why firing came first?

Police were facing the same situation as in the umbrella movement that 5,000 police officers were way less than tens of thousands of Hongkongers. From 3:30pm to 4pm, the force employed a baiting tactic. Front line police officers purposely did not wear gas masks, which projected an illusion of them being slack. Two inspectors in white uniform were assigned in each spot. The message of "no clearance today" was also disseminated to the lawmakers, which further soothed the tension. When protesters were lured into the LegCo Complex, tons of tear gas were fired. Flooded rapidly were special tactical squads hidden inside the Complex, as well as masked police officers with waving batons.

To fire first and then disperse was the deployment of police and the main direction used to clear the scene on 12 June. What's more, firing (such as rubber bullets and bean bag rounds) was aimed at heads, while tear gas canisters were hurled on bodies.

Fire first and then disperse -- The followings were my observation near the LegCo public protest area from 3pm to 4pm:
Protest at midday on 12 June was peaceful. Police had once said that there was no plan to "clear the scene for the time being". Some secondary school students in uniform, office ladies and white-collar workers from Central arrived at the scene to show support to the protest. There were church members lined up in front of the police officers singing hymns incessantly. No violence was foreseen.

The calm ambience at 3pm in the public protest area became tense at near 4pm, when it was learnt that clashes started on Tim Mei Avenue. Police received news at 4pm that protesters were planning to occupy the LegCo.

Another angle at the public protest area: Police officers rushed out to strike protesters
Police fired the first tear gas when officers without gas masks were forced to back off to the corner. Then the riot squads lurked inside the Legco Building flocked in to disperse the crowd by batons. Former Commissioner of Police TSANG Wai-hung had once explained that the use of tear gas was for dispersing the crowd, but the operation this time was obviously to fire first and disperse afterwards. This is completely different from either the operation conducted during the Umbrella Movement in 2014 that "Disperse the crowd first" or the common ways used internationally.

Back to 1989 Govt prevents treachery
I believed that "This is an ORDER" to take a group photo of the police officers next to the patrol car before the operation. The photo could be sent within police WhatsApp groups for showing their loyalty, recognising their faces and implementing stringently the accountability system, in case "treacherous" officers refused to shoot at the scene. With the headshot taken, any uncooperative officers can be tried publicly within Police. I witnessed the first shot at the public protest area.

The inspector made an order to the police officer, who was holding a gun and without a mask, next to his ear. Once the first shot was fired, other police officers would be relieved of a burden and become obedient soldiers who can forget the criminal responsibility of shooting at people's heads. That was why police officers were boasting that they would not allow a second umbrella movement as they have obviously been brain-washed. I believe that even Commissioner Stephen LO Wai-chung was well aware that once there were over 30,000 to 50,000 people around the LegCo, and the Police could only resort to weapons and tear gas for clearance.

In 1989, Xu Qinxian, the army commander of the Beijing 38th Group Army, applied for leave. Sympathizing the citizens, the troops could not clear the scene when they entered the city. DENG Xiaoping worried the morale of the troops and therefore cut off their communications. Soldiers could only wait for instructions at the camps. In 2019, rumours saying that there are opposing voices to the "Fugitive Extradition Bill" at the senior level within the Government. The Government Headquarters was closed for two days. Police officers successively quit from friend WhatsApp groups and fired feverishly in the city. The police force is now out of control. Pro-Beijing camp went against the will of a million of people by keeping silent and trying their very best to attend the meeting. ExCo member Bernard Chan even implied the deployment of the People's Liberation Army, which was however ultimately denied by the Ministry of Foreign Affairs.

Protesters were clad in white and then black, finally turned into red. Say hello to 1989.
Posted by Azurino at 22:40