[4 June 2019] Joey Siu: Unite regardless of generation and protest on 9 June

Unite regardless of generation and protest on 9 June
By Joey Siu, Acting External Vice President of Provisional Executive Committee of the City University of Hong Kong Students' Union
in front of Hong Kong Cultural Centre on 4 June 2019 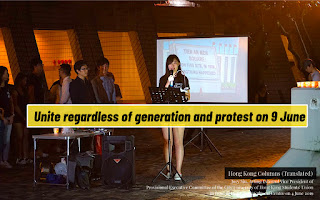 Hello everyone, I am Joey Siu, the Acting External Vice President of Provisional Executive Committee of the City University of Hong Kong Students' Union.

So, first I have to apologize for not having an English version of my speech. But what I want to say is, we all should remember the June 4th movement. We all should remember how cruel can the Chinese government be. No one can save us - only we Hongkongers can save ourselves. As a Hongkonger, as a student, as a student leader, I am willing to voice out for my country, for my homeland. So, 9 June, let's meet at Victoria Park, thank you.
------
(The following is the translation of her Cantonese speech.)
Hello everyone, I am Joey Siu, the Acting External Vice President of Provisional Executive Committee of the City University of Hong Kong Students' Union.

Three decades ago, in Beijing, lots of Chinese students had led the movement in 1989, demanding the CCP government to face squarely to the problems in society and to build a democratic China. Yet, the desire for democracy and freedom by tens of thousands of students was neglected by the government and ended up in a tragedic slaughter in the early hours on 4 June 1989. Cold tanks completely crushed students' hope for democracy, freedom and justice.

Three decades later, in Hong Kong, the CCP regime has time and again showed its fervent desire to destroy the core values of Hong Kong. From disqualifying Edward Leung's candidacy to disqualifying the seats of four elected lawmakers, from NPCSC's Basic Law interpretation to what is happening now - utterly tarnishing the rule of law in Hong Kong by trying to amend the Fugitive Offenders Ordinance (FOO). They want our homeland to become a city under the CCP regime.

In recent years, we can often hear criticisms from people of the older generation about youngsters not attending the candlelight vigil in Victoria Park. As a Hongkonger, I choose not to attend the one in Victoria Park by the Hong Kong Alliance in Support of Patriotic Democratic Movements in China. To build a democratic China is not a responsibility on the shoulders of Hongkongers, who are born and bred here. Putting aside identity issue - fantasizing a brutal regime to vindicate the mistake it made three decades ago and allow democracy and freedom is simply ridiculous.

Still, I choose to commemorate June 4th. As a student, I hope to alert myself the barbarism of the regime Hong Kong is now facing by remembering those sacrificed students in Beijing. As a student leader, I hope to tell more people - especially the younger generation who can no longer learn about the incident completely from textbooks - how brutal the CCP is.

Half of the deadline of "unchanged 50 years" has passed, yet the CCP has an urge to turn Hong Kong red. The rule of law, which Hongkongers are proud of, as well as freedom and democracy, can be described as "it's over". And now, the freedom of assembly - the most fundamental right - is in jeopardy.

The CCP wants to steamroller the draconian FOO amendment. I do not know whether we can commemorate June 4th at the same place next year. Ray Wong, now in exile in Germany, wrote on New York Times that if the FOO amendment is passed, Hong Kong will be dead. At this critical moment of Hong Kong, we should remember the lessons from history. Regardless of older or younger generation, we should put our differences aside and unite to oppose this draconian law.

Hongkongers, let's meet at Victoria Park on 9 June.
Posted by Azurino at 23:53