[HKUSU Undergrad] The Price Paid After the Struggles

The Price Paid After the Struggles
Translated by pseudol, written by Deborah Tsoi [Undergrad May 2017, HKUSU]
Original: https://drive.google.com/file/d/0B4U2Gdqux68-ZTZZa2t0SzE3RUk/view


Hong Kong 1956 riots
On 1956 Double Ten Day (the National Day of the Republic of China), some rightists, supported by Kuomintang spies, rioted after their flags were destroyed by officers of the Resettlement Department. Crimes including arson and robbery, rape and murder were committed. More than 300 people were injured, including Fritz Ernst, the vice-consul of Switzerland in Hong Kong, and his wife. This was the deadliest riot in the history of Hong Kong.

1967 Riot
In May 1967, a labour strike was staged in an artificial flower factory in San Po Kong. Police opened fire on workers which sparked off rioting. The leftists, instigated by China’s Cultural Revolution, confronted the British Hong Kong Government by planting real and fake bombs all over Hong Kong: 1167 in total. At least 52 people died, including 10 police officers. More than 802 people were injured, of whom 212 were police. 1936 people were prosecuted for offences committed during the rioting.

1994 Whitehead Disturbance
A hunger strike launched by Vietnamese boat people in protest against the territory’s repatriation policy degenerated into rioting and acts of arson. A joint operation was carried out to clear the camp, with more than 100 officers and helicopters from Government Flying Service deployed. 500 tear gas canisters were fired by police and correctional officers who met strong resistance during the crackdown.

2000 Hei Ling Chau Disturbance
Around 400 local and Vietnamese inmates were involved in a gang fight at Hei Ling Chau Drug Addiction Treatment Centre. They threw hard objects at police and correctional officers and attempted to set fire to the prison. Tear gas was deployed to quell the disturbance. Multiple injuries were caused. About 20 persons involved were convicted of rioting and received prison sentences ranging from 2 to 10 years. 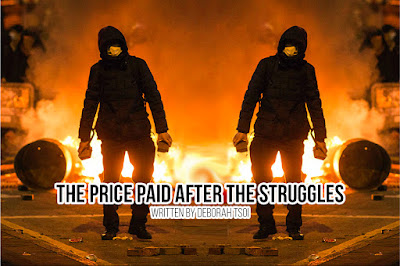 The court cases following the Umbrella Movement in late 2014 and the Mong Kok Incident in early 2016 have not yet ended. Demonstrators in the Umbrella Movement were charged in succession, having been arrested one by one and some are now facing heavy sentences. This is undoubtedly a year of discouragement and frustration. Charged and convicted protesters face imprisonment and the loss of freedoms. Instead of showing empathy, many people took positions against the protesters. Surely, they had to pay the price for their unlawful actions. However, what kind of attitude should we adopt? How should we look at them? Court judgments do not mean in any way that the rule of law and justice are upheld. Conversely, the courts can become a political tool. Biased and exaggerated news reports may not reflect reality, but give rise to misunderstandings which intensify echo chamber effect and social polarisation. When commenting on protesters, I believe members of the public should take their motives, circumstances and the social context into account to make a fair judgement.

After the Umbrella Movement
Just one day after the Chief Executive Election, a new chapter of political persecution was effected. All nine Occupy Central founders - Benny Tai Yiu-ting, Chan Kin-man and Reverend Chu Yiu-ming, lawmakers Tanya Chan and Shiu Ka-chun, the Democratic Party’s Lee Wing-tat, former leader of the Hong Kong Federation of Students Eason Chung Yiu-wah, Tommy Cheung Sau-yin and League of Social Democrats vice-chairman Raphael Wong Ho-ming - were charged with the common law crime of committing public nuisance. The maximum penalty for that offence is a seven-year term of imprisonment. The sentence for the common law offence is heavier than those for of public nuisance under the Summary Offences Ordinance and unlawful assembly under the Public Order Ordinance. The Civic Party’s Alan Leong suspects charging the nine for the common law offence is a political decision based on the higher maximum penalty. Some others also said that so doing aimed at evading the sensitive issue of freedom of assembly.

2016 Mong Kok Civil Unrest
Key words: Hawkers, Illegality, Glass, Bricks, Arson, Rioters, Severe punishment, Deterrence
Many people felt that while the protesters’ actions were too violent and threatened others’ safety, it was unforgivable for the police to fire warning shots. Therefore, they blamed both the police and protesters equally. The charges against 91 protesters in total included rioting, arson, unlawful assembly, assault on police officers, possession of offensive weapons and public nuisance. Several participants were convicted. One of them was sentenced to nine-month imprisonment for assaulting police and resisting arrest. Three (including one student from the University of Hong Kong) received a three-year prison sentence for rioting. Another will spend four years and nine months in jail for arson. Hongkongers were charged and convicted of rioting for the first time since rioting was made an offence in the 1970s.
The Mong Kok civil unrest was classified as a riot. Many people have questioned the heaviness of the sentences. After taking into account the background of the defendant, reasons of the mitigation plea and motives for committing the crime, could the judge impose deterrent sentences?

Motives behind the struggle
Judge Sham Siu-man said in his judgment that “Violence is violence and there is no difference. Should lenient sentences be imposed to those who expressed discontent with the government? Should they be imposed to those with loftier ideals even though the level of violence was the same?” It's impossible to generalise when discussing the various acts of violence: they cannot be viewed in black and white terms. If the court does not take motives and intentions into consideration when meting out a penalty, what is the point of making a plea in mitigation?

There is no doubt that the Umbrella Movement was a civil disobedience movement. Participants placed great emphasis on the long-term interests of the public in their fight for social justice. They hoped to force the regime to face public opinion and give a more democratic proposal on universal suffrage through practising non-violent disobedience. However, among those tens of thousands of participants, not all of them fully supported the philosophy of civil disobedience. Instead, many protesters were motivated to act by the firing of 78 tear gas canisters and so wished to collaborate with the students to face down the political machine. Their reasons changed with the environment. They had no choices to commit crimes but were unwilling to resign themselves to fate. The forcefulness of Leung Chun-ying encouraged more and more people to join the Umbrella Movement.

In the Mong Kok civil unrest, the motives of protesters were even more complicated.

Dissatisfied with the government’s crackdown on hawkers, some responded to the appeal made by political organisations and went to the scene to lend their support. Some took to the streets up in arms over the police firing of warning shots. Some bore longer grudges against the style of policing in Hong Kong while some were dissatisfied with the government. Unlike the relatively planned and organised Umbrella Movement, the Mong Kok Civil Unrest was more spontaneous and lacked proper organisation. The flames of violence flared up as conflicts escalated. Frankly, many of the participants were driven by emotion as they threw bricks and glass bottles. They relied on sheer luck to avoid arrest. However, even though we cannot articulate every protester's motive, they had in common a fight, not for personal gain, but for societal interests. Their actions, which attempted to protect other protesters, were altruistic.
Judge Anthony Kwok, who was responsible for the rioting case, stated that this riot was more serious than the Whitehead Disturbance. The obstinate insistence of the police was key in turning the mayhem in Mong Kok into a riot and added fuel to the fire. The clashes were completely out of control. The police hoped to clear the hawkers at an early stage and spoiled the pleasure of fishball lovers by deploying a Police Tactical Unit. Plainclothes officers brandished batons and used pepper spray against those protesting the clearout. In consequence, the protesters sought revenge by throwing objects at the scene. However, in the case of the Whitehead Disturbance, the lawyer for the first defendant in the Mong Kok clashes said, “Vietnamese boat people used self-made weapons to attack another group of refugees. Their acts were apparently premeditated.” The two cases were completely different in terms of motive.

Conclusion: How should we look at the protesters?
The court’s ruling is out of public control. However, instead of sneering, severing ties with the persons involved and rubbing salt into protesters’ wounds, I believe the public should sympathise with them and understand the difficulties of our society. A helping hand should be lent to those peers behind bars.

Perhaps to many, protesters embracing the rule of “non-violence” is crucial. Yet, what is more important than to think about their reasons for taking risks?  It took time for protesters’ sentiments to develop.

Persecution by the police in previous social movements, the suppression tactics of the regime in various controversies and the failure of "peaceful, rational and non-violent" protest movements culminated in the use of violence. These arguments do not aim to absolve those who cause harm to others, but to point out that the public should think and question whether the assumption that "as long as violent behaviours are involved, things become definitely evil" is correct. The degree of acceptance of various behaviours changes over time and in different contexts. Some people agreed the act of throwing bottles was shocking and disconcerting. However, does that not imply that the firing of shots by the police unlocked Pandora's box by promoting the use of violence? I believe people with a conscience would not make heartless and harsh comments after reflection.

In the future, the Hong Kong communist regime will seek to put the participants of the Umbrella Movement and the protesters of the Mong Kok Civil Unrest in jail. I beseech every Hongkonger not to blame the protesters. This extra burden of blame should not be added to their lot: rather, more support should be provided.