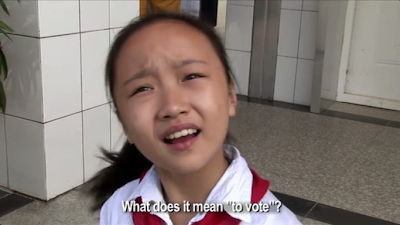 One may have noticed the recent presence of “the Sounds of Silence” in Hong Kong community. They insist that “politicisation” is not a positive attribute of any place. In their point of view, politicians are to be divisive and the post-90s citizens are too inexperienced to handle things right. To them, conflicts, regardless of any nature, will only sew discord within the city. Frowned at each sight of aggressive protestors, they seriously believe that the one and only survival way-out left for Hong Kong is “de-politicization”.

These people are not entirely formed by groups of paid Internet ghostwriters employed by the establishment camp. Many of them are made blind as a result of comfortable lives. Without realising that politics is accounted for one after another leap forward for the city, the naïveté in them allows the spread of an unascertainable belief of which Hongkongers’ political apathy contributes to the undivided attention on economics and the subsequent prosperity.

In 1949, a good number of funds and talents entered, and thus favoured Hong Kong due to the fall of China. The cold war after that drew the iron curtain that separated China from the western world, while Hong Kong connecting to both sides managed to create an economic legend with entrepôt dominance. As to the welfare system in Hong Kong, basically, it is established to prevent another wave of Hong Kong 1967 Leftist riots and to placate the widespread anger among the population. Before the deadline of 1997’s Handover, the game plan for the British Hong Kong Government was to add more bargaining chips in the political negotiations with the Chinese Communist Party.1 Suddenly, repudiated the autocracy they used to practice, the government suggested to put parliamentary democracy into execution. Had it not been stymied by the Chinese Communist Party, we would have known at first hand the benefits brought by “politicisation”: ordinary men can vote to protect themselves from dignitaries’ corruption.

Over a long period of time, the governments in charge have hypnotised Hongkongers into believing that their meaning of life is supposed to devote as politically apathetic economic animal. Subconsciously, this misleading move has rationalised the fully negative image of politics. The word “Politicisation”, similar to the slang “Kong gals”, is thought to carry only derogatory connotations. Skipping further exploration to that common idea, many gullible people fall for such casuistry. Condemning CY Leung for his unauthorized building works, to them, is “politicisation”; uploading pictures of mainland Chinese’s wrongdoings in Hong Kong society and criticizing those behaviours, to them, are applications of “politicization”; realizing the so-called integration between Hong Kong and Mainland China to be an annexation, to them, is again “politicization”... By taking a deeper thought to that, one will notice that the people with the notion to “de-politicize” turn out to take an unfathomable liking to “politicisation”. To achieve whatever purpose, an unfailing  explanation to the man-made flux of mislabeling on every opposition is the advantage attached to the surefire moral-high-ground position — one does not have to bother one’s head about making persuasive counter-arguments.

Being well aware of the above advantages, mainland China is probably the most successful representative to deploy omnipresent “de-politicization" — zero freedom to talk about politics within the country. What is more, in this world of “de-politicization", any action carrying the faintest trait of politicisation is to be oppressed by the authority. People requesting the government to implement the constitution is regarded an incitement to subvert state power; people demanding that those infant formula companies make reasonable compensation, it is public nuisance; people making petitions in an attempt to overthrow forced eviction end up in labour camps... The specifically designed search engines adoptable in the country even filter out “Communist Party” because it is too sensitive a word for its people. Such extreme is destined for an opposite extreme. Thanks to that, there’s a whole new world of politicisation born where political trickeries are so common even to kids who are far from reaching mental maturity. A documentary called Please Vote for Me2 talks about an election of class monitor among some primary 2 students in Wuhan, China. It begins with a boy saying his grounds to stand for election. He says, “A class monitor represents power. The class has to stand and sit under the command of the class monitor.” At this young age, this boy has come into contact with “pork barrel” promising his classmates seats in the class association for a vote. Plus, he instigates others to “mobilise the masses” and to sabotage the talent show on the spot so other candidates wouldn’t gain advantages. There are no lengths to which this child will not go to gain power and influence. Adept politicking and aberrant enthusiasm in power, unquestionably, are nothing common to children in ordinary countries.

At the beginning of the documentary, another competitor refuses his police-officer parents’ offer to “help him do something” for more votes. To us, it seems to be an odd enough offer. And this boy does appear to have a backbone like ramrod at that time and he says, “I don’t want to control them. Let them think. They can vote for whoever they want.” But then, he suffers from a competitor’s politicking and decides to take his parents’ suggestion. Free “guanxi” trip on the railway for the whole class and distributing pre-mid-Autumn-festival presents in front of everyone before the vote bribe his way to a win.

In the end of it, interestingly, the teacher concludes with this: Be it victory or loss, every one of you has learned a "precious" lesson...  The teacher also mentions that this lesson is going to play a huge role in their growth path. The camera captured a fairly dramatic final scene: the losing candidates are required to shake hands with the winning candidate and to say a few words of blessing to him; the class is filled with claps; on the wall of that very classroom, there hangs a Chinese banner that reads "embrace integrity and bravery; be diligent and a constant thinker". I assume that those kids truly benefited a great deal. After all, now that the kids know mere politicking is far from being effective, the prudential policy to cope with villains is to be one of them — suppressing the masses — and to confuse people by giving them advantages at certain times. An unpleasant surprise is that to them, the foul measures to meet purposes can still be divided into "better" and "worse".

An almost universally accepted opinion of politics is that it is a disgust, which politicians brazenly enjoy vested interests through demagogueries. Precisely because of it, the need to eliminate the possibility of black-box operations shall not be ignored. Those sayings which advocate creating "a better world" by "de-politicization" are ridiculous lies indeed.

Yim Man-wa, an activist, was charged with an assault on a police officer (Translator’s note: On 2012’s Hong Kong 1 July demonstration, the protestors had waited for hours before they can start. Some participants demanded the police to retract the blockages at Causeway Road so as to make way for protestors. Yim hunkered and crossed the cordon line. Some police officers were there carrying her away and she bet one of them.) and had to serve her sentence in a rehabilitation centre.

Originally it was a perfectly normal school event to visit these centres as it serves as an alert so that the students are aware of the consequences if they go astray. But I wonder that if defending for a good cause continued to be looked down, these centres would eventually deteriorate into some coward factories from where the visitors would get the idea to not come forward against injustice.

The authority’s repression of dissent in modern Hong Kong has aggravated without scruple, and yet commoners should carry on the mission impossible to avoid being too “politicised”? Isn’t it an obvious means to force people to return to the “motherland”?

In the name of “de-politicization” again and again, the authority lowers the value of justice. A society where early education is about to follow the opposite direction of justice and to learn by heart all those dark unspoken rules is never a society with justice. Just as communism to mainland China, justice may seem to be theoretically acceptable, but underneath, if you talk about the true application of it, the people there will laugh their hands off. So, back to “de-politicisation”, what is it? The most powerful trick of the authority.


1. Chris Patten, a former governor of Hong Kong, suggested the 1994 Hong Kong electoral reform in an attempt to make it a more direct-election-like form. The plan is that 9 functional constituencies would be added to the Legislative Council and the employees in those industries would be entitled to vote. Beijing banned the suggestion and the primary unit of the current functional constituencies is a company. In other words, only a few employers have the right to vote in this aspect.↩