Wesley: In HK's Deserted Battle, It's All About Volition

In Hong Kong's Deserted Battle, It's All About Volition
Translated by Chen-t'ang 鎮棠, written by Wesley
Original: http://www.passiontimes.hk/article/03-09-2016/29222 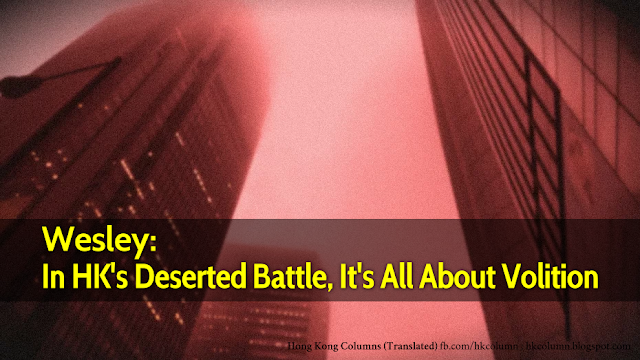 What appears on media recently? Students' suicide cases. Why? Stresses from studies. Since the new academic year, 19 has taken their own lives.

We are not them, we can never know how many agony and stresses they have walked through. What they endured might not be solely on academic stresses, and suicide notes can barely conclude their melancholies. Family, friendship, love or other despairs might cause their suicides. For those who were born after the Handover, they have started suffering the stresses from the society: competition for bed spaces, milk formula, lead-tainted water, and after birth? Land, insufficient housing flats, inflation.... okay, "knowledge changes fate", so things might get better in schools? Putonghua as MOI in Chinese subject, national education, spoon-feeding, all-time comparison between classmates and teachers on different things, and the list runs on and on. How about work? We have distorted company structure, unfair treatment from the supervisor, speech like "no overtime work means not aggressive enough", incommensurate proportion between wage and stress, criticisms from the society... these are suffocating.

Stresses do not only come from the pathetic now, and the desperate future. All nonsense policies, all injustice in the society, all ugly faces in LegCo, people disappearing "voluntarily" as if caught by KGB, the "One Country, Two Systems" which has melted earlier than it supposed to be ... spare kids, adults can barely see light in such a long tunnel.

When I was still studying, I will put on a sad face when I encountered difficulties. My mother would sigh and quote Xin Qiji (a Song dynasty literati), "while young, people do not know about sorrow". That might mean, "dude, you have so much more to bear in the future".

But we don't want to bear any more.

Protests, resistance, or "riot" are not for fun. Government officials are civilized beasts when they say "youngsters' resistance is barely for fame among their friends" without looking at the real problem in Hong Kong. Resistance on streets are perhaps the only hope they have got.

The society forces us to stand out, we need perseverance, action and volition. When it comes to valorous resistance, we need to resist all sorts of pressure from the media, we need volition; in companies, colleagues may have an axe to grind with you, you need to keep calm and carry on, we need volition; under the authoritarian regime, we do not scare or retreat, we need volition; academic pressure, classmates' teasing, peers' betrayal, family issues... we need volition to stand.

To live on, we need volition.

And in Hong Kong's deserted battle, it's all about volition.

My youngster friends, I will not ask you to join valorous resistance before your suicidal, or say something like "better to die in glory than live in dishonour". You own your life, and you have the right to choose your future. But remember, you will not lose when you are alive. Turn the so-called "courage to die" into a volition to revenge. Resist to those who looked down upon you, cast injustice on you, cause dejected feelings on you. It might fail, you might fall, but when you carry on and persist, one day, they will fall before you.

Remember - Carry on, and you will know, we can claim victory in this battle, LIFE.
Posted by Azurino at 22:01