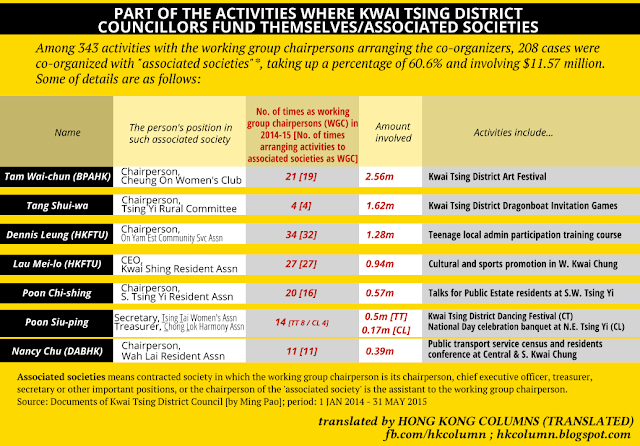 It is found that 60% of all 343 activities granted by Kwai Tsing District Council were co-organised with "associated societies" in which the district councillors who acted as the working group chairpersons took up important positions. Over $10 million was involved in the course without any open tendering procedures. Activities that were successfully held through such "granting-to-themselves”"practice include whole-district activities namely Art Festival and Dancing Festival.

Stephen Char, the former Chief Investigator of the Independent Commission Against Corruption (ICAC), remarked that such system is giving an impression of "feathering one's own nest". A more impartial practice, Char suggested, should rely on committee's voting result rather than chairperson's sole decision. 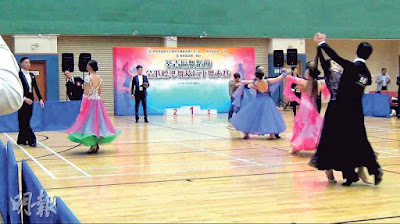 Nancy Poon, the working group chairperson of the Kwai Tsing Dancing Festival, is also the secretary of Tsing Tai Women's Association. (Photo from the Internet) 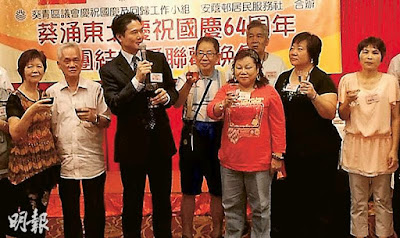 Dennis Leung (middle; in black suits) explained it is hard to find other organisations which is willing to pay in advance. (Photo from the Internet)

Other examples include: scheduled in coming July and August, the teenage local administrative participation training course, concerning a $100,000 funding, is contracted to the community service association of On Yam Estate. The chairperson of the Society turns out to be Dennis Leung from the Hong Kong Federation of Trade Unions, the working group chairperson.

In response to the issue, Dennis Leung explained the decision of contracting the Festival out to the community service association of On Yam Estate is mostly due to the importance to have a credible and reliable co-organiser.

“There are difficulties to replace the current practice with other societies. While the District Council proposes activities under the system, the Home Affairs Department (HAD) is not willing to bear the follow-up work. As payment for the activity has to be settled in advance, it adds burden to do so… And some of the activities require a huge social network which cannot be fulfilled by ordinary NGOs.” Dennis Leung has just relieved from his office as the chairperson of the On Yam Estate Community Service Association. 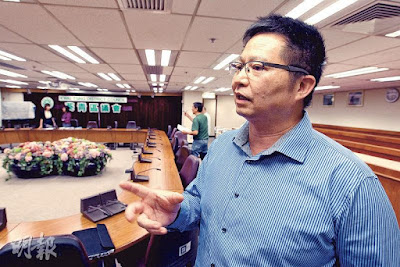 Law King-shing, Vice-Chairperson of the Kwai Tsing District Council (from DABHK), said, “I doubt if there is many local groups willing to organize these activities. We welcome them if there is. But the fact is they have to have experience and money and also willingness to pay in advance.” As he stated, the District Council has a report system with strict regulation on expenditure and it is impossible for anyone to make a profit out of it. 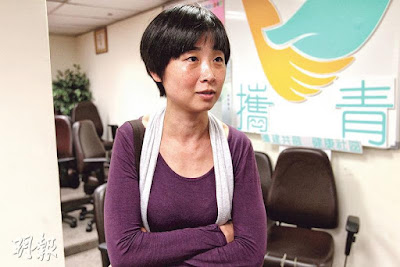 Chu Lai-ling said  the frequent “associated societies” practice is only leading to money loss and no profit at all for personal and political promotion. (Photo by Lam Chun-yuen Ming Pao)

Chu Lai-ling, district councilor from DABHK, also contracted an activity out to the Wa Lai Residents Association, of which she is the chairperson. She stated in her reply that the activity cannot be used in personal promotion and thus there should be no benefit for political promotion in having her own society organising the activity.

“Activities of the District Council should be in open application, treating everyone on the same basis and providing equal information to all qualified societies. If not, there would be an impression of injustice,” said Char. He believed that the choice of co-organisers should rest with a committee with a fair grading system instead of the working group chairperson solely.

The Chief Executive Officer of DPHK Lam Cheuk-ting, the former Investigator of the ICAC commented that it is terrible to have the working group chairperson searching “associated societies” in co-organizing activities under the District Council. As the working group chairperson, the district councillor should take the role of a monitor towards the particular society which organises such events.

“If I were both the working group chairperson and the person-in-charge of the society, there would be a conflict in roles and interests. And the HAD is failing to fulfill its duty in prohibiting such situation.” Lam believed that the ICAC should closely review the problems in the system given that when the District Council makes decision on granting for activities, more than one society should be searched for with transparent procedures. 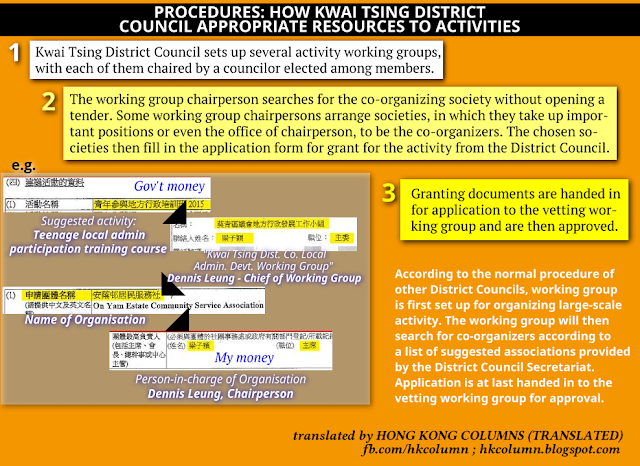