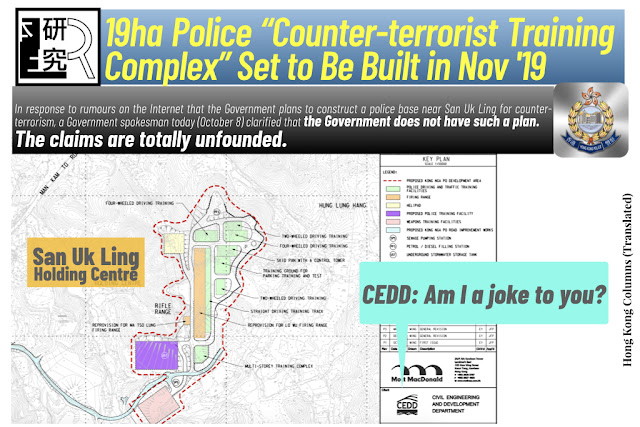 Not many people noticed this but the government secretly allocated $1.913 billion funds at the beginning of the anti-ELAB movement for site formation of about 19 hectares of land at Kong Nga Po - right next to the Chinese border and San Uk Ling Holding Centre. This will be a big step in "Xinjiang"-ising Hong Kong as the site will be used for building a gigantic police facility for counter-terrorism.

The government plans to form a site of about 19 hectares at Kong Nga Po, equivalent to one Victoria Park. It will be "a purpose-built advanced tactical training facility for counter-terrorist and other specialist operations" [PWSC(2018-19)41 Encl. 4 p. 61 note 2], isolated from the urban area, similar to the many huge counter-terrorist complexes in Xinjiang.

What will be in this facility at Kong Nga Po, or "New Xinjiang"? Not much has been publicised, but according to a plan submitted during the environmental impact assessment (in 2016), there will be firing ranges, weapons training facilities (WTF), police driving and traffic training facilities (including a multi-storey training complex), a helipad, and a proposed Police Training Facility (PTF).

When LegCo members Au Nok-hin and Ray Chan Chi-chuen asked for more details, the authorities then answered that [Chi only] the Specialist Operation Training Facility is "for counter-terrorist and other specialist operations". There will be a "simulated urban environment as a training facility". For weapons training facilities - WTF, surrounding firing ranges will be integrated into one big firing range so that the police can conduct an amplitude of firearm training, including pistols, rifles, shotguns. Also, the facility in Fanling - or the carpark of water cannon trucks, will be placed inside this "counter-terrorist facility" in Kong Nga Po. The police can train, from dawn to dusk, how to use these water cannon trucks or armoured vehicles with LRAD (Long Range Acoustic Device) in a far-flung forest without anyone knowing.

With no Osama bin Laden in Hong Kong, this kind of counter-terrorist training is clearly targeting public events, such as protests or rallies.

Weirdly enough, the government explained the purpose of this project as the relocation of firing ranges and other police facilities into a big one, but the latest plan did not include San Uk Ling Holding Centre and the nearby San Uk Ling Firing Range - these two have remained in the development plan.

So when Carrie Lam said San Uk Ling has ceased to operate, was that "suspension" or "withdrawal"? If it is not a permanent cessation, the holding centre may be integrated into this "New Xinjiang" project to become part of a counter-terrorist base. Will the holding centre become a new "re-education camp" like those in Xinjiang or a Guantanamo in the New Territories?

Why wasn't this reported?

The project was not widely known because the government is good at playing with red tapes, putting this site formation project into the $33.5 billion appropriations of Northeast New Territories. While the press will focus on the demolition of villages or developers' hegemony, no attention will be on this counter-terrorism site in "New Xinjiang". See, everything was printed in the footnotes (note #3):

When people are focusing on Fugitive Offenders Ordinance, the government has already obtained $1.913 billion to start site formation. The tender (Contract No.: ND/2018/01) said it will begin works from November this year - next month!

Now we are just talking about $1.913 billion for site formation ONLY. For a counter-terrorism facility cluster of this scale, it is very likely to cost over $10 billion. As of now, there is no estimate breakdown of the facility's budget. When the site formation is done, the Security Bureau can ask for whatever it wants to.

The police are treating streets with protesters as firing ranges nearly every day, aren't such training of firearm enough? There is no need to have such a training facility. If a huge place like this had been made available for drills of water cannon trucks or Unimog armoured vehicles with LRAD, its lethality will be way more than what you saw weeks ago. Thus we have to oppose this $10B+ project, which is presented as a counter-terrorism facility but, in fact, will be used to train cops to attack Hongkongers.

If there is no need to build such a counter-terrorism base and site formation has been completed, the most pragmatic solution is to move the current police training school in Wong Chuk Hang - which is 18ha - into Kong Nga Po. By vacating the site on Island South, 13,000 residential flats might be built thereon, according to JLL LaSalle.

If we have to stop police violence, we must stop this "New Xinjiang" counter-terrorism project. If Carrie Lam does not take money from the coffer by invoking the emergency law, the Security Bureau is expected to apply for funds of this facility within this fiscal year. Please spread this message, do more and keep abreast of the latest situation - prevent Hong Kong from becoming another Xinjiang!

***
HKCT note: The government issued a press release to respond to rumours before the publication of this article:

Chinese media have reported the project [HKCT note: SCMP, The Standard and HKFP did not report this matter as of the moment of this translation] and attracted some public attention. Although the government secretly secured the funds for site formation of Kong Nga Po police facility, or "New Xinjiang", the police force will seek funding for the main works of the facility. That will not be so easy unless Carrie Lam invokes the emergency law for funding again.

As of now, the government spokesman gave a low-key response of "totally unfounded claims" without any supporting evidence, meaning Liber Research Community has totally hit the bull's eye! OK, time for us to provide more red-handed evidence.

Govt claims info unfounded, but such info was from govt!

All information provided in the entire episode 1 is cited from official documents, including the Specialist Operation Training Facility - those were from documents submitted to LegCo. The "purpose-built advanced tactical training facility for counter-terrorist and other specialist operations" was from the government as well.

"Totally unfounded"? Does that mean the government is concocting information to deceive LegCo?

From super-prison cluster to "New Xinjiang"

It is important to read more extensively before you decide. Spend 3 minutes to know the course of history so that "the devil in the detail" is unveiled:

In short, the crucial "devil" moment occurred after 2014: first came the claim to centralise police facilities, then the mention of "training facilities" was added in 2016 with no mention of counter-terrorism in EIA. After repeated counter-terrorist drills and the Xinjiang visit, the Security Bureau asked LegCo for funds for the site formation of the project, with the indication of the facility's use for counter-terrorism only mentioned in the fine prints. Why the secrecy from the government? You got the answer.

Counter-terrorism base for sure!

When the government said "New Xinjiang" is not a counter-terrorism base, Liber Research Community carefully combed through the most recent LegCo papers and found the document: 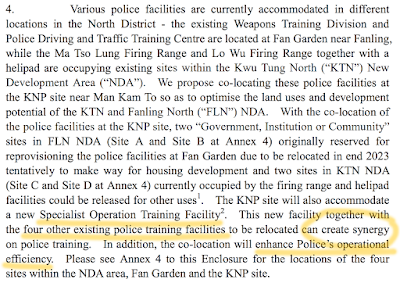 The KNP site will also accommodate a new Specialist Operation Training Facility. This new facility together with the four other existing police training facilities to be relocated can create synergy on police training. In addition, the co-location will enhance Police’s operational efficiency.

The reason why the facilities have to be relocated and centralised is not just about counter-terrorism, but to use this gigantic site - the size of Victoria Park - to "create synergy", so that the entire site can be used for counter-terrorism. With that, the police can use tear gas, live ammunition, water cannon trucks, fluorescent powder, LRAD (and the list goes on) concurrently in the facility. They may even put a dummy Joshua Wong in the "simulated urban environment" to practise breaking into flats and capturing a target alive. Synergy is only possible when the facilities are centralised, taking police brutality to a new level.

Questions:
Spread this message if you do not want Hong Kong to become another Xinjiang.
Posted by Azurino at 08:30 No comments: