(1)
Guo Wengui made the entire CCP Politburo headaches, Interpol issuing a Red Warrant, and China’s Min. of Foreign Affairs to exert pressure to US congress for ending his tip-off programme on VOA. It is only him who will need the entire country’s force to deal with.

Also known as Miles Kwok, Guo said his family foundation controls over US$280 bn, enjoying lots of luxury products, cars, private jets, flats, etc. Challenging the Party is to “save his life, keep his money and revenge”, Guo claimed.

After the VOA programme was terminated, journalists and editors involved were either suspended or brought away by security guards. Guo disappeared in the press. Next Magazine found him, and he tipped off about HK.

Guo was a grass-root with low qualifications, but with good persuasion, he managed to gain a seat in the officialdom and the business world. According to China, he bribed the deputy minister of PRC Min. of State Security, and Party secretaries in Hebei and Henan have to listen to him. With these forces backing, he once called the shot in China.

Guo became a globally wanted person, making him famous. China will soon have its 19th Congress. With such power battle, people are focused on whether Guo will keep tipping off.

TIP-OFF 1: MSS & MPS Officers Work in HK for Long Time
Next: You said Min. of State Security and Min. of Public Security have cross-border law enforcement in HK. What are the details?

Guo: Compatriots in HK are too honest. There are so many MSS and MPS officers working and investigating in HK. I know that at least there are long-term offices in China Res. Bldg., Causeway Bay and Fo Tan. At least 300 PRC officers are staying HK for law enforcement on a long term basis. They often go to search houses, knock people’s doors, check information in banks, stalk people, etc. This is already law enforcement in HK.

Some media said Ma Jian (former deputy minister of MSS) received two flats in Taikoo Shing from me. The two flats were opened and searched for times. You can think about that, was that HK police opening the door? Certainly not, who then? They must be from PRC, PRC cops are searching flats everywhere.

Before coming to the US, I was in HK and met these people frequently. Some from Beijing Public Security Bureau, from “Security Ministry”, intel people from General Staff Dept Session 2. At least few thousands work in HK.
- - -
Next Magazine asked him to prove. Guo said he has the info at hand but will disclose that to the public by himself later on.

Next Magazine asked HK police whether MSS and MPS officers have searched for evidence and enforce law in HK. HK police’s reply was “no comment”. 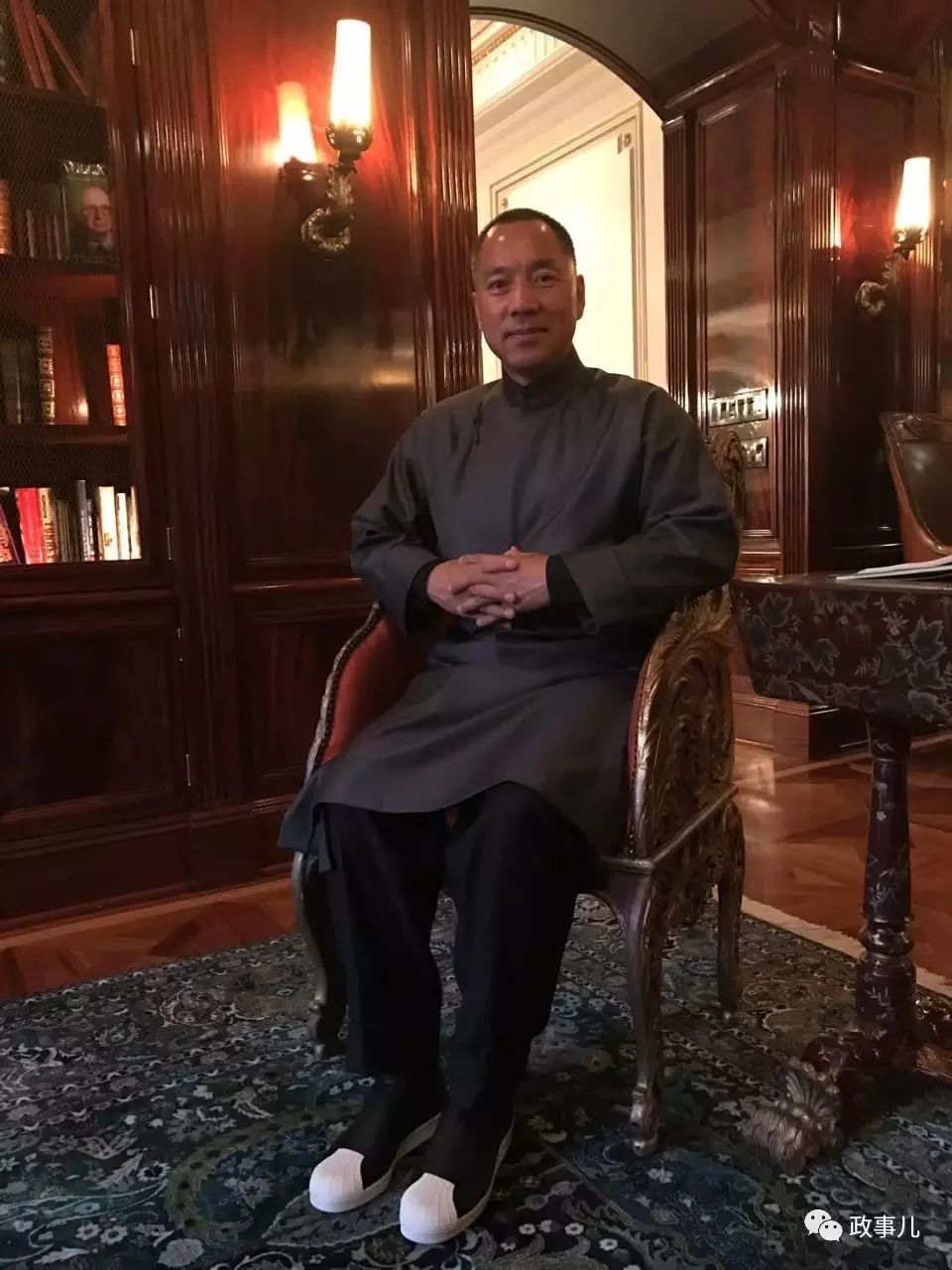 Guo continued to spill the beans - the high land premium thing by PRC consortia was actually a “sand dilution scheme”. PRC wants to dilute HK people with PRC people, and hope Chinese capital to take over HK’s economy and livelihood.

TIP-OFF 2: High Land Premium = “Sand Dilution Scheme”
Next: HNA Group from China bid lots of land sites with high price in HK in the past 12 months. It won sites in Kai Tak with extremely high prices, surprising the market. (Video clip: Over $27.2 bn spent on sites in Kai Tak)

Guo: They buy land sites in HK but not for development. This is “sand dilution scheme”. Firstly, send more immigrants to HK. Dilute HK people with PRC people, then there will be no more “HKers”.

Secondly, “diluting sand” financially. When PRC real estate tycoons take over, HK developers won’t have a chance, and only PRC will control the entire real estate market. Controlling real estate market is controlling the life of HK. He can make your prices slump by 50%, then HKers will commit suicide. He can also make prices surge to a level you can’t afford. Real estate is a real political conspiracy.

Half of the land premium paid by HNA Group were borrowed from local banks in HK. If they can’t repay, this is tantamount to “hijacking” with PRC banks. That would be “too big to fail”. HK’s economy will be hijacked, and the commoners dare not challenge it.

There will be a very huge catastrophe in HK, financially, politically and in terms of global reputation. There will be huge incident(s).

Next: What is the relationship between HNA Group and Wang Qishan?

Guo: Wang is backing. Wang is a shareholder, or else how can HNA Group bring hundreds of billions out from China? How is that possible? It is certainly abnormal. Of course, Wang’s family is HNA’s shareholder and boss.

In the past you may believe - would Wang and his family do that? No one would believe that. HK is under Secretary Meng Jianzhu’s hands. He can do whatever he wants under Meng’s control.
- - -
Next Magazine asked what proof do Guo have to certify the relationship between HNA Group and Wang, but he did not provide any concrete evidence.

(3)
With a heavy Northeastern accent, this super-billionaire also teased the second-generation rich in HK to please Beijing officials for their shelter. Guo said, “it is too pathetic and selfish, without regarding HK people’s overall interests”. After leaving China, he now lives in the US. He remained luxurious, and often post supercars and flats in the UK and the US. He boasted 29 cars, including McLaren P1, LaFerrari, Koenigsegg CCX, Apollo etc. Benz also designed a bespoke car for his safety.

He said he has three houses in Manhattan, NY. One was bought with US$80mn, with a gym room. Guo claimed that he will do gym 6 days a week, 2 hours a day. He posted a lot of exercise pics on Twitter.

TIP-OFF 3: Pathetic to See HK Billionaires to Please Beijing Officials
Next: Do you know billionaires in HK?
Guo: I knew loads of them. HK billionaires all go to Beijing and please officials, begging for their shelter (figuratively), but don’t forget - they are just used tools.

Second generation rich in HK are very arrogant to the public in HK, but they squat on the floor (figuratively) without dignity. Isn’t it pathetic? I knew a lot of rich men. Rich men in the past were well respected, but for their own benefits, they lost such dignity. It’s too pathetic.
- - -
Next Magazine kept asking about names of these rich men but Guo did not reply.

(4)
HK people believed the outlook is dim, and One Country, Two Systems cannot be realized. HK gradually becomes a normal city in PRC. There are some voices of emigration in recent years. Guo emigrated long ago, but he ridiculed HK people.

He urged HKers to voice their views and strive, as the situation in HK is sad.

However, Guo has emigrated to lots of countries. It is said that he has given up China’s household registration, and owns 11 passports, including US and UK ones. He also tweeted about having residency in Abu Dhabi. It is learnt that he has an HKID card too, renaming himself as “Guo Haoyun 郭浩雲”. In 2011, through a BVI company, he bought two super big houses in 20 and 22 South Bay Road, Repulse Bay. It is reported that his son, Guo Qiang, once entered the houses.

Guo kept posting his recent status, including his jogs and so on. It seemed that he doesn’t care about CCP’s suppression. Next Magazine contacted Guo through WhatsApp. His profile picture is a photo with him and Dalai Lama.

Guo said “I will, in a certain period of time, be loud about HK, not getting quiet. Just like things on the Mainland, if I speak up, I will be loud”.

His phone can only receive WhatsApp message but can’t be called. The journalist sometimes did not receive his reply even waiting midnight. When the journalist wanted to do a more in-depth interview, he said he will consider it as many media in HK are finding him.

(5, some duplicated parts have been deleted)

South Bay Road houses were reported to have illegal structures. Our journalist went there and discovered construction works are going on. The journalist asked whether Guo’s family is in there, but security guards blocked our coverage and cameras.

Guo can tip off such important intel because he has a strong “shelter” above. Former deputy minister of MSS Ma Jian, Party secretary of Hebei Province Zhang Yue and Henan Party standing committee member Wang Youjie were some of the “shelter sources”. Ma Jian was under probe due to corruption charges. Guo was a friend of secret police chief, so Guo left China and started his life in the US.

According to CCP, Ma was removed in 2015. In a video, Ma said he knew Guo in 2008, and Guo knew if he gets close to Ma, Guo’s business kingdom can be protected.

Ma confessed in the clip, “From 2018 to 2014, I used my authority and duty convenience to help Guo a lot on Guo’s own problem and his company operations”.

What is most ruthless? Guo also used a “shelter” - the secret service system to get rid of people he dislikes. Qu Long, former executive director of Beijing Zenith Real Estate (Zhengquan Zhiye, in Pinyin), was an underling of Guo. Due to business disputes, Qu reported Guo. Guo asked for help from Ma Jian and Zhang Yue. Ma and Zhang removed Qu with their authorities. They contacted Public Security Dept of Hebei Province. Chengde Court of Hebei eventually charged Qu of “illegal possession of guns” for 15 years. It is reported that Qu has been sent to Beijing for helping the probe into Guo Wengui.

Ma took RMB60 mn bribe. Ma confessed that around 2011, Guo bought two flats for me in Taikoo Shing, HK, with an area of nearly 200 sq.m.. He spent over HK$30 mn for that. In order to avert risks, the properties were under the name of my nephew, but the actual owner is Ma himself.

After Ma Jian was arrested, Guo claimed that Central Investigation Unit has sent officers to probe into this for times in HK, and even entered flats in Taikoo Shing. The blatant cross-border law enforcement was known by the property security guards. Next Magazine asked for detailed address.

Guo’s Minzu Securities and Founder Group merged. Founder Group’s (former) CEO Li You and Guo had a good relationship, as they took the same private jet to countries. They became enemies when they are fighting for a director seat. After the break-up, they also revealed more. Guo also disclosed the relation network behind Li, including Hu Shuli and Wang Qishan. In Jan 2015, Li was detained due to insider trading. Two months Li was arrested, CIRC chairman Xiang Junbo was probed early Apr 2017. Xiang was the president of ABC, and it is said that Xiang approved RMB3.2 bn loan to Guo, so Xiang was dragged down and probed too.

The entire tip-off involved so many people, including businessmen and higher-ups, and even Politbuto members. This has become highly complex and sensitive. As Guo has been among the higher-ups’ network, and his backings were gradually arrested, every one became more interested in his tip-offs.