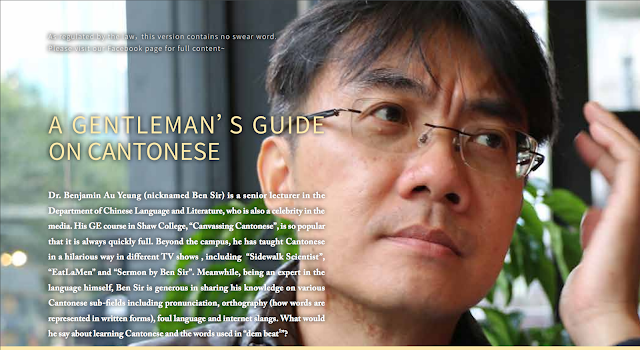 Dr. Benjamin Au Yeung (nicknamed Ben Sir) is a senior lecturer in the Department of Chinese Language and Literature, who is also a celebrity in the media. His GE course in Shaw College, “Canvassing Cantonese”, is so popular that it is always quickly full. Beyond the campus, he has taught Cantonese in a hilarious way in different TV shows, including “Sidewalk Scientist”, “EatLaMen” and “Sermon by Ben Sir”. Meanwhile, being an expert in the language himself, Ben Sir is generous in sharing his knowledge on various Cantonese sub-fields including pronunciation, orthography (how words are represented in written forms), foul language and internet slangs. What would he say about learning Cantonese and the words used in “dem beat (the activity that a group of people reciting some phrases loudly and moving their hands and feet. It is often used for promotions of societies and the games in orientation camps)?”

Why is Cantonese so hard?
Ben Sir thinks that there are three major obstacles for international students in learning Cantonese although they may have some background knowledge in the language. Firstly, he finds that p, t and k stop consonants in the last syllable are quite challenging to them. For instance, the word 十 (sap6, ten) is easily confused with 實 (sat6, solid). Likewise, the word 熱 (jit6, hot) is often mispronounced as 葉 (jip6, leave). From his observation, even though non-local students consciously try to, they still struggle to distinguish these ending consonants. Besides, they often misuse or avoid using the Cantonese particles, which indicate the tones and emotions of the sentences. Words like 呢 (ne1), 喎 (wo3) and 喎 (wo5) might sound strange to foreign ears, but to locals, sentences without them sound like coming from a news report. Ben Sir has also noticed that counter words are also challenging to non-local students. Instead of using the specific words for different nouns like locals do, they might replace any others with the most common one 個 (go3) and this would sound odd. Ben Sir thinks that as non-local students may be too afraid to make mistakes and so they avoid unfamiliar words. Lastly, as mentioned above, the Chinese particle 喎 has two tones, wo3 and wo5, which indicates slightly different meanings. Another word (啩, gwaa3), which suggests uncertainty, might also be mixed up with 喎 (wo3 or wo5), posing difficulties to some beginning learners of Cantonese. But these are all integral parts of everyday spoken Cantonese; avoiding them would make one sound unnatural or too formal.

How might the locals help
But how to overcome these hurdles? On one hand, Ben Sir recommends non-local students to compare similar sentences with minor differences in tones, particles in context so they will notice which one sounds right. On the other hand, he encourages them to experience local culture in places like Lan Kwai Fong, Yau Ma Tei and Jordan Road with their local friends. An effective way of learning is to experience the local’s everyday life such as going to yum cha (Cantonese Restaurants) or travelling by public transport. We might invite international students to guess how the new South Island MTR line station names are pronounced and go together with them to check if they are correct. By then, non-local students could have more common interests and interactions with locals. Likewise, he suggests local students teaching them Cantonese swear words as they are “the most interesting part of a foreign language”.
When asked which swear word he would he teach, the word 屌 (diu2, fuck) instantly came to Ben Sir’s mind. In his view, this is a simple yet useful word for expressing anger, but surprisingly this is not what he would teach the non-local students first. As a humble and polite person, he says he would teach do1 ze6 (多謝, thank you), m4 goi1 (唔該, also means thank you) and deoi3 m4 zyu6 (對唔住, sorry). There is a subtle difference in do1 ze6 and m4 goi1, as Cantonese people say the first phrase to thank for gifts, and the second for an act. Certainly, polite words are a part of “survival Cantonese”.

The best “beat”
Decades ago in CUHK, when Ben Sir was still an undergraduate student majoring in English, limericks with 4 lines and 7 characters were more commonly used in orientation camps than “dem beat”. These limericks are often derogatory remarks about another college. The best-known line 聯合組媽最盡責 (lyun4 hap6 zou2 maa1 zeoi3 zeon6 zaak3), was even mentioned in a stand-up comedy. The word 組媽 (zou2 maa1) refers to the female students who take care of the freshmen in orientation camps. While the phrase literally means that they are dutiful, the next line states that they performed blowjobs to male freshmen. This offensive phrase first appeared in an orientation camp back in 2002, and shocked the conservative Hongkongers. Anyway, Ben Sir generalises that the four lines in the limericks should ideally form a story, otherwise it would sound awkward.

As for “dem beat”, now a necessity in orientation camps, Ben Sir sees that the one by Morningside College gives out a more powerful tone. He adds that “the whole piece is in a traditional style of writing called 駢文 (pianwen, or parallel prose) in which every line begins with 4 characters and ends with 6.” A great example would be the line so2 hoeng3 pei1 mei4, daai3 dung6 fung1 wan4 sei3 hei2 (所向披靡，帶動風雲四起) which roughly means we are unstoppable and bring chaos everywhere. In Ben Sir’s view, the beats of other colleges sound less like Cantonese. The words used in that beat are colloquial Cantonese, such as ging1 tin1 dung6 dei6 (驚天動地, meaning earth-shattering). while the words used in, for example, Woo Sing College’s beats, are rather sophisticated and poetic because of the phrase po4 so1 syu6 jing2 (婆娑樹影), which describes the trees as “paradisiacal” and “beauteous”. “That’s clearly not the words we would use to describe the trees in our daily life. It is important to strike a balance between readability and complexity.” Ben Sir concludes.

The “Woo Sing Beat” is widely heard and ridiculed. After watching the video of the beat, Ben Sir gave a plausible explanation for this: “Although the words themselves are sophisticated, the students’ attitude did not match the beat. A model looks pretty with a fur coat, but not a person with a humble look. How can the students not be mocked when they looked so unenergetic?”

Is Cantonese dying?
When it comes to the future of Cantonese, its marginalization comes to our mind. But Ben Sir says he is not that pessimistic. There was a study showing that 90% of interviewees were native Cantonese speakers, but when it was repeated recently, the result dropped to 89%. He says we can assure ourselves that 89% is still high, but cannot deny that the figure has dropped, “and it’ll be worse as Hong Kongers will immigrate, die and be gradually replaced by mainlanders.” He continues that, “probably one day only 10% of Hong Kong residents are native speakers of Cantonese. Well, at that time we can still say that Cantonese has not been extinct.”
Ben Sir has noticed that Mandarin words have replaced their Cantonese counterparts in everyday conversations. For example, opening ceremony in Cantonese is 開幕禮 (hoi1 mok6 lai5), but some follow the mainlanders and say 開幕式 (hoi1 mok6 sik1). To slow down the decay of Cantonese, Ben Sir suggests us to write in Cantonese* “so that we can add value to the language, before it dies.”