Marcus Lau: What Are the Hong Kong Separatists Thinking?

What Are the Hong Kong Separatists Thinking?
Written by Marcus Lau 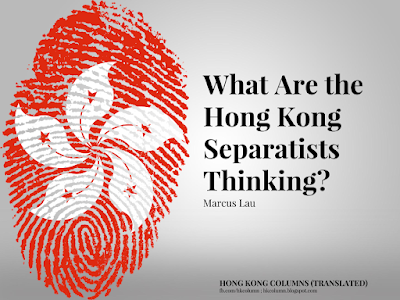 Hong Kong - A brand new school year to many means another purchase of absurdly expensive textbooks, but school year in Hong Kong is not like ever before.

Followed by banning separatists figures like Edward Leung and Andy Chan Ho-tin from running the legislative council election, high school students advocating Hong Kong independence were prohibited from distributing flyers on campus. Chief Executive Chun-Ying Leung depicted the belief of Hong Kong independence as if it is drugs or swear words. Meanwhile, teachers face potential disqualification if they encourage discussion of the topic in the classroom. The question here is, where do these ideals of Hong Kong independence come from?

The last time Hong Kong appeared on headlines all over the world was two years ago when the Umbrella Revolution broke out. The 79-day occupation demanding democracy marked its failure when the police cleared up the occupation zones in Admiralty, Mong Kok and Causeway Bay. The revolution did not leave Hong Kong people with nothing though. It enlightens youth of Hong Kong that Hong Kong would never gain genuine democracy under the sovereignty of China.

The end of the movement opens a new page for the political dynamics in Hong Kong. Young people started to organise for social resistance and elections. Varied from the path of the traditional democrats who adhere to a Chinese identity as well as China’s sovereignty on Hong Kong, the rising localists suggest that Hong Kong is an imagined community itself with its own culture and set of values and shall enjoy a self-determination right, especially when the constitution Hong Kong is adopting (i.e. Basic Law) is facing an expiry in 2047. In March this year, the Hong Kong National Party (HKNP) was founded as the first political party that advocates Hong Kong independence. Later in August, when the Hong Kong government slammed the door for certain candidates, HKNP held a rally titled “Hong Kong independence”, over 10,000 people attended.

From a recent poll we can tell 17 percent of the Hong Kong population supports Hong Kong independence, and among the age group of 15-24, the support doubled at 40 percent. To the older generation, Hong Kong and China is like mother and son. To separatists, Hong Kong and China is in a broken marriage and Hong Kong is suffering from brutal domestic violence. Like much Taiwanese and Catalonian, youth wants to separate from China. They don’t see “One country, two systems” promised by the Sino-British Joint Declaration could guarantee Hong Kong with a high degree of autonomy as written in the declaration when the political power rests mostly in the hands of the Chinese government.

Despite unprecedented repression on freedom of expression, a separatist movement is developing its way led by the generation that undergone the umbrella revolution. Foreseeably, the Chinese government would use any means to suppress the movement from spreading as any separatist movements would undermine the legitimacy of the Chinese government. However, the honesty of history never fails to reveal the truth that the harder the repression, the stronger the reaction.
Posted by Azurino at 12:44