Statement of the Generation: 10 Awareness as a Nation and Mass Movement

Statement of the Generation: Awareness as a Nation and Mass Movement
Translated by Ryan L., written by The Undergrad session 2015, HKUSU 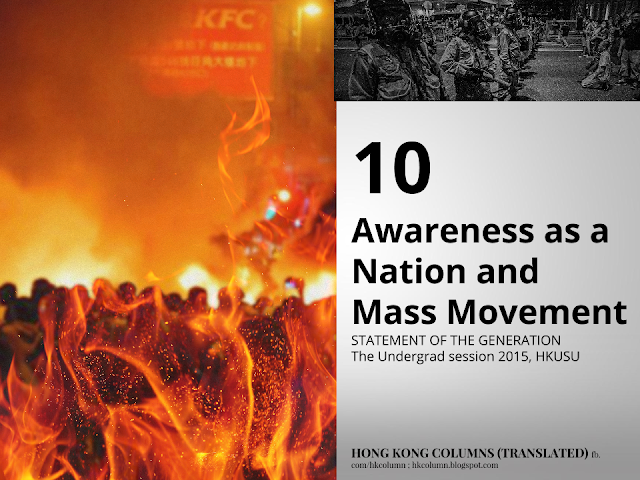 [DIRECTORY: AT THE END]


"There is no assembly, there is only the people!"
The cry “demolish the big stage” (meaning the leadership) still rings in my ears. History has turned this page. In the new spring of 2016, unrest broke out in Mong Kok resulting in a policeman aiming his gun at the people. The crowd threw bricks in reaction. Thus did Hong Kong begin the New Year amid the din of confrontation. Police batons were struck, fires broke out on the streets. The red of the New Year was that of the protesters’ struggles, the shadows on the street highlighted in the red of flames.

Outraged we berate the government. Outrage is generated by fear. Yet this fear is not nameless for it is the government which has devolved into fear. It is only through endless struggle that we may feel our presence and fill the vacuum bred by fear. In the Battle of Mong Kok our courage came from the strength of the people. Being Hongkongers we must support one another.

During the Umbrella Movement, the leadership in Admiralty cut ties with Mong Kok. In the face of pressure from the police, the leadership in Admiralty chose to draw a line between themselves and the people. The violence outside of the line was condemned as detrimental to the halo of morality. However, we saw that those wearing this halo was elitism, class superiority and politicians’ hijacking. Yet we failed to see the failure of political morality. That was the "moralism" that caused us to change.

The leadership claimed to be civic resistance ready to be arrested believing that this virtue would awaken our citizens. Academics propagated that non-violent resistance was the only moral avenue. Various theories and speeches told protesters that only compliance with the strategies of the big stage would prolong the struggle and eventuate in democratic triumph. We saw much moralising to the point of fatigue. We believed that political virtue would lead to a change in reality but if all these public speeches sufficed, why don’t we believe in the path ahead? Why would we question the appropriateness of the leadership when the people are forced to be absent? We sense that a force is festering amid the people which will fester into a more intense, dearer struggle. We are uncertain where this force will take Hong Kong.

On the night of the Mong Kok unrest, we clearly saw the pent-up anger explode. The protesters unleashed the displeasure nurtured since the failure of the Umbrella Revolution, fanned by the unreasonable actions of the government, the ire from waiting for Hong Kong's democratisation combined with the questionable behaviour of the police. The tension that existed already between the people and the police was pushed to tipping point by the FEHD's treatment of street hawkers.

Presently we do not know what confrontation will ultimately bring us. In the face of police ready to act, there is no way to calculate the pros and cons of the result. From the beginning we were prepared to fight for justice late in coming. We believe that instinctive resistance is Hong Kong’s final road. It is the basic condition for being human. During the struggle we were members of the people. Everyone rose to protect the values we cherished at heart. A common force, forged by common belief motivated us to move forward. We are the people. The people is us. We do not even know whether this same people bears similar localist beliefs, do they hate the Chinese government’s whimsical bullying of Hong Kong nor do we know their character, their visage, their backgrounds or whether they are leftist, rightist. Membership in this group has only one common denominator: the perception that Hong Kong is our home, we will not give her up.

China reneged on the promise of One Country, Two Systems, obstructing realisation of democracy and autonomy. It has turned the HKSARG into a puppet which seeks to control the media. On the one hand it uses all administrative instruments at its disposal to monopolise TVB’s right of management, on the other hand encroaches on print media. This regime uses violence to colonise our identities, denigrates the position of Cantonese, demolishes historical structures, oppresses Hong Kong identity and tries to impose patriotic education. This regime sows terror: it does not properly handle livelihood issues such as the lead poisoning incident; Chinese police are able to exceed jurisdiction to abduct people; it reduces freedom of speech; the police abuse their powers to arrest citizens and on many occasions attacked victims. This regime sees the working class as enemies, ignores justice, regards development as the highest virtue and does its best to authorise infrastructure projects to further integrate Hong Kong into China. It does not hide the political motivations behind its policies. For Hongkongers not to resist is to shame basic conscience and dignity.

But, as we actively resist the oppressive government, what do we wish to accomplish? From the Umbrella Revolution to present we have witnessed the emergence of populism. The liberty, cultural habits and local traditions originally enjoyed by Hongkongers are being eroded by the intense imperialism of China. Discontent is being intensified. Though each cause for discontent differs from each person, the discontent coalesces and mutually cooperates then strikes. Populism has become an important factor for Hong Kong’s future struggle.

We are a member of the people. The righteous fury of populism is a factor in the formation of our character. Yet simultaneously we must maintain our political promise - that perfection promised to the common body of the Hongkonger ethnicity. These two elements decides the direction of our political identification and the basic political positions of future strugglers. The people are our partners yet this partnership is not one of mutual restraint and harm. On the other hand we must have:
Populism will play two roles in Hong Kong’s future: a factor in social progression and a pivotal force for overthrowing an illegitimate regime. Localism is not only an analytical tool that explains the social changes of Hong Kong, it is also important Hongkonger ideology and a pivot in the reinforcement of Hong Kong’s democratic culture. Though the last seems a distant goal in the present political environment, we must be steadfast in our hermeneutic role for it is the most prominent moral foundation of localism.

There was initially no clear logical connection between localism and populism. However, in reality we have participated in the rise of populism and simultaneously devoted ourselves to establishing the theory of localism, fleshing out its contents. The future freedom and democracy of Hong Kong which awaits actualisation depends on whether we can properly draw out a common road for both nationalism and social movement.

Statement of the Generation
00 - Preamble

02 - The Possibilities of Education