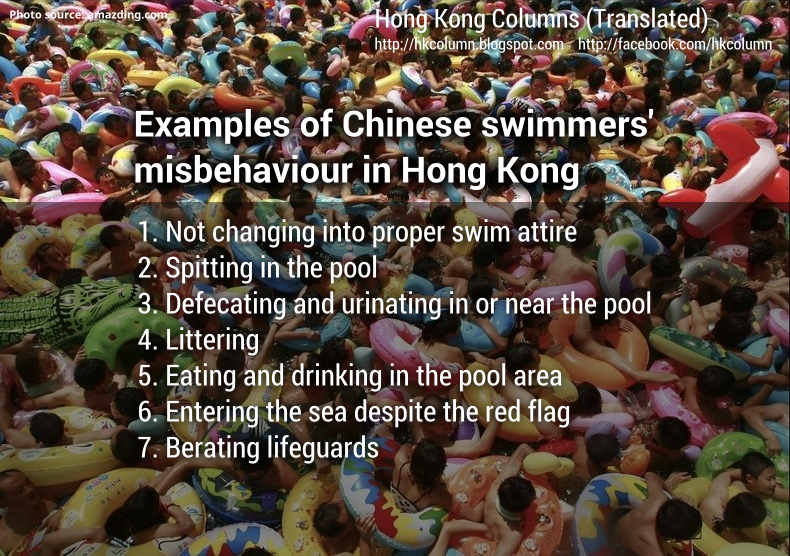 Since Canton (Guangzhou)'s newspaper Southern Metropolis Daily published an article last month encouraging Chinese citizens to enjoy the more affordable and higher quality public pools in Hong Kong, mainlanders have flocked to the city's swimming facilities, bringing along a myriad of hygienic problems. Gregory So Kam-leung, one of Hong Kong's top officials, downplayed the Chinese tourists' misbehaviour as "cultural differences".  But to me, what the mainlanders have done in Hong Kong are but subterfuge.  Their behaviour cannot be explained by mere oversight of culture and customs, but rather, it is meant to trample on the rules in Hong Kong, and to take advantage of the benevolence of Hongkongers.

There are signs as clear as day that say "No eating or drinking", "Please do not swim if you have gastrointestinal symptoms", "Wear proper swimwear when you swim" all around the pool, but Chinese people take no notice. They even bring potato chips and picnic food to feast in the pool. They do it on purpose, what is this but provocation?

What is most unbearable to Hongkongers is that they allow themselves or their children to defecate in the pool.  "Children cannot hold the call of nature!" is their favourite defence. But Hongkongers bring their kids to the pool too. And often there are dozen or so young children in a swimming lesson in a pool. Yet seldom do we find a local kid pooing in the open. Why, do mainland kids have looser buttholes? They argue that they cannot find a bathroom on the streets of Mong Kok, but what about pools? Anyone who has been to a public pool knows there is a bathroom between the changing room and the swimming area. You would have to be blind to not see one.

I personally cannot think of anything more despicable than Chinese tourists defecating in the pool. When they mistake the streets as their private toilet, they would quibble and chastise onlookers who pick on them as sticking their fingers in other people's pie (or poo, in this case), "So what if I answer nature's call? You better watch your step!" But in the swimming pool? Hundreds of people share the same pool of water. Even if the pooing is done on the pool's edge, the sewage will still float through the water and pollute the whole water. When swimmers—pooers included—are enjoying the cool in the pool, how disgusting would it be when they find human waste brushing off their arms and legs? Screw "cultural differences"!  Will any sane person poo while taking a bath in their own bathtub?

[Translator's note: I would like to quote from Leung Man-tao. He spoke this in his programme:
//Chinese people do not care about their privacy, but Chinese people to some extent is very selfish. For example, in public spaces, Chinese people are not civic-minded since long ago. They simply throw things on the streets. I had too many experiences when I took coach buses in China, a driver said, "You're from Hong Kong right? You see Chinese people are not civic-minded at all, why don't they throw rubbish outside the window?" I read a book by a socialist, he said, Chinese people treat the public aspect as the surplus of private aspect. For example, when they clean their siheyuan [Quadrangle houses in Beijing], at the end, they must throw all dirty things or sewage outside their door, because they treat the street out there as a rubbish dump. On this aspect, Chinese people attach much importance to the private aspect.//]

These incredibly selfish and inconsiderate Chinese tourists bash Hongkongers with their snotty attitude and say, "So what if I eat and excrete in the pool? Bite me!" They deliberate make a mess out of our public pools, robbing local swimmers of the fun of getting cool in the dog days of summer. To such arrogant high horses, we have to use harsh measures:  when did they ever listen to us when we tell them gently?

The Hong Kong & Kowloon Lifeguards' Union went on strike on Monday (Aug 5) to protest heavy workloads driven by the influx of Chinese tourists and the mess they bring.  Although the strike would prevent local swimmers from using the pools facilities as well, the lifeguards are compelled to do so as our government are not taking any remedial action to ease their burden. I do hope the strike can force the government to crop up measures to bring back the public pool to be enjoyed by Hongkongers—its rightful owners.
Posted by Azurino at 00:07:00